Taliban en route to Kabul: The second largest city in Afghanistan has been captured 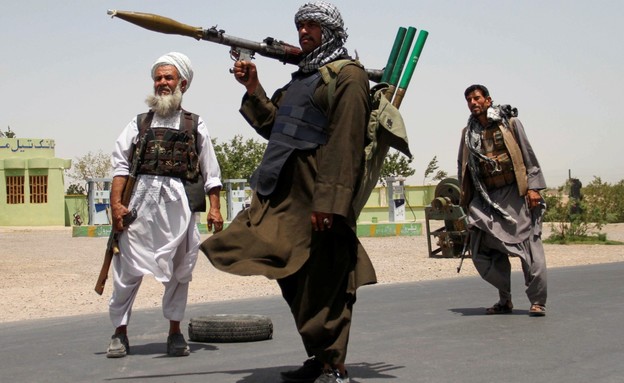 The Taliban today (Friday) captured Kandahar, the second largest city in Afghanistan. Kandahar is the spiritual home of the extremist Islamic organization, which today controls two.thirds of Afghanistan, and is setting up an arrowhead towards the conquest of the capital Kabul, having already managed to take control of some of the main roads and major cities on the main road leading to it. On Tuesday, the city of Gazani, 90 kilometers south of the capital, fell between Kabul and Kandahar. In addition, the third largest city in Afghanistan, Harat, is on the verge of falling into the hands of the Taliban amid heavy fighting in the region.

Against the background of the Taliban’s rapid progress towards Kabul, the United States and Britain announced last night that they were sending troops to Afghanistan for a limited period, in order to secure the evacuation of their people from the capital. In less than a month, U.S–led international forces are due to leave the country after 20 years. Ahead of the departure of Western forces, since May the Taliban have been taking over major cities and provinces in the country.

The Pentagon said the U.S. intended to send 3,000 troops to help and the British military said it would send 600 troops to secure the two countries’ embassies in Kabul. Pentagon spokesman John Kirby said the first deployment would take place by Saturday evening.

At the same time, an intention was reported to significantly reduce the workforce at the US embassy in Kabul, and to prepare for a situation that would require the evacuation of all diplomats. Earlier, the US State Department called on US citizens staying in Afghanistan to leave.

In Harat, heavy fighting is still going on in the streets, from house to house. The extremist Islamic organization, which seeks to restore strict Sharia law, leaves behind smoke and flames. Reuters reports that Taliban fighters can be heard in the city calling on people in the neighborhoods to wave the organization’s flag. The control of the rat, in addition to the battle of Kandahar, are one of the Islamic organization’s most significant victories since it began cutting the Afghan map in May.

The rapid progress raises questions about the time the Afghan government will be able to maintain control of the country’s fragments and the fear is that eventually the government will be forced to retreat to protect the capital. Thousands of people displaced from their homes following the fighting across the country fled to Kabul and live in open fields and parks. They fill the roads to the city after the tenth province break fell to the Taliban within days.

Dari, a displaced woman who came to Kabul, recounts the atrocities: “They expelled us from the house at gunpoint, they killed my sons, raped and married their brides, they took several women from every house and married them by force. We had to flee.” Another unnamed displaced man told the news agency: “If it’s not cruelty I do not know what yes, I had a small shop, no more, what do I have now? I have nothing in my life.“

A US intelligence source said the Taliban could isolate Kabul within 30 days and take control of it within 90 days, that is – complete the occupation of the country. The speed and violence that accompanies the Taliban attack has angered many Afghans over U.S. President Joe Biden’s decision to pull forces and leave the failed Afghan government to fight alone.

Al Jazeera reported that a government official had suggested that the Taliban divide power in order to stop the violence, but the organization’s spokesman Zabihullah Mujahid said he was unaware of the proposal and ruled out any co.operation. “We will not accept such an offer. “, said. “We do not stay or work with them for a single day.“

Joseph Burrell, the EU’s foreign policy chief, also commented on the escalating situation in Afghanistan, saying “we encourage the Afghan government to settle political differences and negotiate with the Taliban on a cohesive basis.” He added that an agreement reached peacefully and respecting the basic rights of all Afghan citizens, including women, young people and minorities, is the key to the EU’s continued support for the government there. “

Burrell called on the Taliban to return immediately to the negotiating table and reach a comprehensive ceasefire. “These ongoing attacks are causing great suffering for Afghan citizens, increasing the number of displaced people in the country, and the number of those fleeing the country in search of security,” he added. “The Taliban is at risk of non.recognition, isolation and lack of international support – if it seizes power by force and re.establishes Islamic statements.“