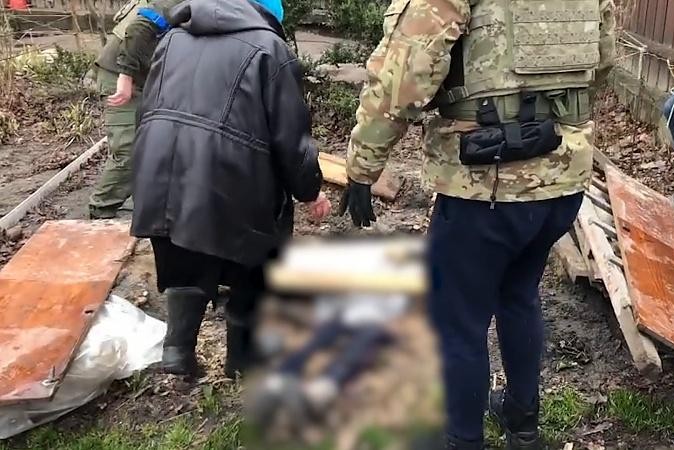 Now that the Russian troops have moved out of Butya, near Kiev, the magnitude and horror of their occupation of the city is becoming apparent. At least 340 bodies of civilians were recovered on Sunday alone, shortly after the Russian army withdrew, and the toll could rise. One of them is Tetiana Pomazanko (56) who was mercilessly shot dead on February 27. The fact that her 76-year-old mother had to wait until Sunday to properly bury her body makes the situation all the more distressing.

It is not only when they left that the Russian troops committed atrocities, according to the story of Tetiana Pomazanko. On February 27, three days after Russia’s invasion of Ukraine, the 56-year-old resident of Butya saw a column of Russian troops driving down her street.

When she went to her front door to see what was going on, she was shot without mercy. The woman died immediately. “She thought they were Ukrainian troops,” explains her mother Antonina (76), who lived with her.

All that was left for the old woman was to provide her daughter with a beautiful final resting place. That was far from self-evident in recent weeks, when fighting in the city continued incessantly and residents ventured out at the risk of their lives.

And so it is that Antonina got no further than partially wrapping her daughter’s body in plastic and partially placing it in a pit with planks over it. Her daughter’s feet, wrapped in wool socks and overshoes, lay exposed all the while. “I had to bury her at night,” she says. “There were so many shelling, I didn’t know what to do.”

She had to wait until Sunday for the Russians to move out of the city and Ukrainian soldiers to help her give daughter Tetiana a more respectable burial place.

In addition to Tetiana, hundreds of other civilian bodies were found haphazardly on the street, buried in backyards or piled up in mass graves.

ALSO READ. Russia itself convenes Security Council after horrific images from Butja: “I was hoping mainly for the support of other states” (+)