The separatists of Europe find themselves in Palermo. Journey between ghosts and new vespers 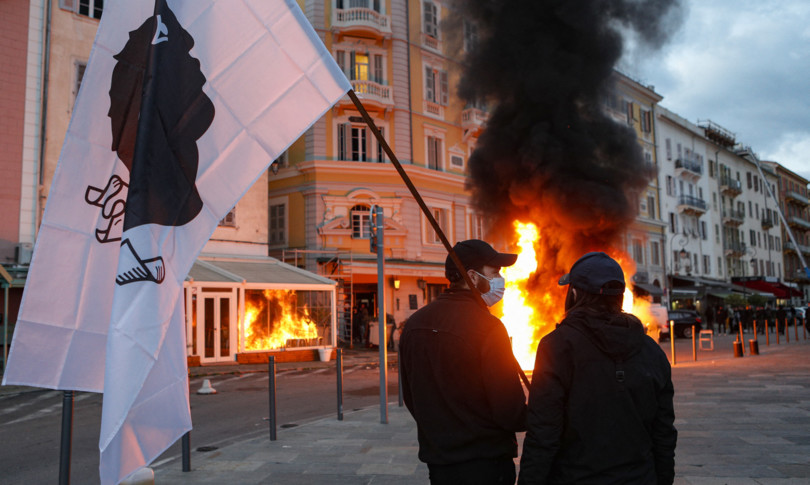 Another specter, beyond the dramatic and tragic one of war, is shaking Europe. There is not only Corsica, shaken in recent days by the protests after the death in prison of Yvan Colonna, one of the most charismatic figures of independence.

Several the regions of the old continent that today could claim the principle of self-determination for themselves: hot fronts mainly concentrated in the Iberian Peninsula, such as the Basque Country, but which also concern Scotland, Corsica and some Italian areas, including Sardinia and Sicily.

Themes at the heart of a comparison on international independence, organized precisely in Palermo on the occasion of the 740th anniversary of the 1282 Vespers revolution. The proposal is to make these meetings stable, to create a European forum of independence, with all those who are here and those who are not. Every couple of months they meet, discuss, take positions. Exchange information, news, the state of the art, referendums: “Every victory of one is a victory of the other, a step forward towards the elaboration of common paths and strategies“.

Pasquale Picoury, of the Ghjuventù Indipendentista, also took part in the gathering of the different souls, wanted by the Sicilian independence activists of Trinacria, which gathers all the movements that fight for the independence of Corsica. “After Ivan’s death,” Picoury told AGI. moments of tension followed one another and clashes with the police, which prompted the French president to talk about a possible path towards autonomy for Corsica, but the times are still not certain “.

A malaise fed, perhaps, also by him scarce fruit harvested after “the more than seven years with the nationalists in charge of the country, during which most of the claims remained unfulfilled – underlined Pasquale – and this is one of the reasons that caused the anger of young people to explode in the streets”.

“After three weeks of open confrontation with the French government – continues Picoury – we realized that we have succeeded in advancing our claims more than what has been achieved up to now with only democratic participation. Certainly – he added in a peremptory tone – in Corsica he will never wave red, white and blue, but only white and black with the dark brown of the Corsican flag “.

The disappointment of the Scots

A struggle, that for autonomy, carried on in recent years also by the Scots, as witnessed by Jordan Linden, of the Scottish National Party (Snp). “During the referendum for Scottish independence they told us that by voting no, we could have stayed inside Europe “, he recalls with AGI Linden when in 2014 55% of the population refused to leave their homeland during the consultation. It was”one of the many English lies. Like when the Scots voted no, but Brexit was there anyway, even against our will. ”

To fuel stomach ache a long list of unfulfilled commitments: “Shipbuilding would have developed, they would have given more power to our land, greater investment in energy – underlines Linden – the promises made to the people have all been missed. We have only one possibility of improvement: the struggle for liberation, for the the right to be independent, to be masters of our choices about the future. The Scottish people have had enough and wants to change. We will hold a referendum, I hope in 2023, because the future of Scotland is not in the hands of Boris Johnson. The hope is that Scotland will be an example for all those fighting for independence. ”

Among the most constructive examples in Europe there is certainly that of Catalonia, also thanks to referendum which in 2017despite the intervention of the Spanish police who intervened in several polling stations to prevent the vote, the yes vote was won with 90% of the votes. “The Catalans went to vote to decide their future and the Spanish state responded with repression – says Pau Juvillà, of the Cup Paisos Catalans – a clash that has led dozens of people to prison or exile, and over 3,000 to process”.

Yet, explains Juvillà, “today in the regional Parliament, the separatist parties enjoy a majority of 52%, but it is our mayors and advisers who have given us the strength to achieve this result. The social transformation for independence necessarily starts from the low Municipalism: only after consolidating our space in the municipalities, in fact, did we decide to run for the Parliament of Catalonia and then of the Spanish State “.

The mayors “stood alongside the citizens and offered space to vote: this is why today dozens of them have been sentenced or are about to be persecuted. Some even physically prevented the police from entering the polling stations”.

… and the Basque one

Another contribution that of Lorena Lopez de Lacalle (Basque Country), of the European Free Alliance, a European political party “which groups 45 parties and movements that make self-determination their cornerstone“. The image that represents EFA – which at this moment, through its member parties, governs in Scotland, Flanders, Catalonia, Corsica – is an ‘It is upside down because” we want another Europe that puts respect into practice. diversity. A Europe built from below and from municipalism, very far from the centralism of which the 27 member states of the EU are ostentatious “. From this point of view, Scotland and Catalonia” are at the forefront “, while other peoples are on the way.

For example “in our country – highlights Lorena – national construction aims at creation of the confederation of the Basque Country. Today we have become the leading opposition force in all our countries. I believe this is one of the necessary keys for all of us: networking, working together, learning from each other, and spreading best practices. ”

However, Europe has “a democratic duty to give an answer to all European peoples who are asking for independence. And when European states ignore or repress these desires of our peoples, the Union must intervene. We want clear rules to be established, which require states to dialogue, an amendment to the European treaty. We want to bring this initiative to the Council of Europe as well. The war has greatly accelerated positions in the EU and in the world – he added – and there is no doubt that the current conflict in Ukraine has a lot to do with the right of peoples to decide their own future “.

Also in Italy the demands for independence have never subsided, especially on the two large islands. For Elio Di Piazza, a retired university professor of the Trinacria association, “the nationalization process has distorted the true memory of the Sicilian vespers, coincidentally immediately after the unification of Italy, giving a reading that is still prevalent today, obscuring the revolutionary character of the Sicilian people in favor of the Savoyard kingdom. For these reasons, the intertwining between vespers and the unification of Italy has always been claimed. But I believe that among the tasks of the independence movement there is precisely that of bringing light the greatest liberation struggle our people have ever fought and won “.

“Scots, Sardinians, Irish, Catalans, Corsicans, Sicilians … – argues Tiziana Albanese from Trinacria – we are united by the desire for the liberation of our lands. An independence that does not mean isolation, that builds new roads and new alliances. “This April 3 hundreds of Sicilians took to the streets in Palermo on the occasion of the 740th anniversary of the Vespers revolution. Drums, Vespers flags, banners and choirs accompanied the march, called the Sicilian pride. “In March 1282 – remembers Tiziana Albanese – the Sicilians hunted the Angevins. After years of abuse and violence, after a long period of domination and exploitation, the people finally freed themselves from subjection to a handful of Angevin colonizers. In the following days the federation of municipalities, united in the Communitas Siciliae, abolished the absolutist monarchy and established a system of self-government. The struggle for liberation from colonial rule and the creation of new institutional forms of government: these are the principles of the Vespers that seem more relevant than ever and to claim which we still take to the streets today “.

April 3 is also the day on which the Vespers flag was born, which later became the symbol of Sicily. The first revolutionary nuclei had formed in Palermo and Corleone, from this first cell of municipal federation the flag was born, which in fact bears the red and yellow colors of the two cities. “If the memory of Vespers is still alive today – he concludes – it means that the oppression of the people is not over, that exploitation, misery, emigration, environmental, health, cultural and, last but not least, catastrophe are still unbearable. military occupation. The oppressors have changed, of course, but the territorial and human devastation continues unstoppable “. A “new Vespers”, is everyone’s belief, “is possible when, proud of one’s history, we will fight together again for self-determination “.