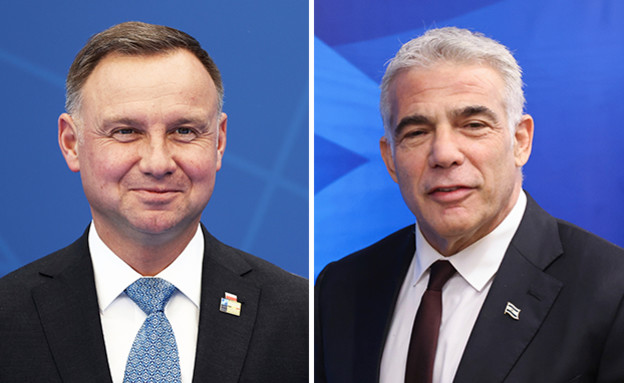 About two hours after the President of Poland signed the Property Law – Foreign Minister Lapid this evening (Saturday) ordered the head of the embassy in Warsaw to return immediately to Israel for consultations, indefinitely. In addition, the Ministry of Foreign Affairs will recommend that the Polish Ambassador to Israel continue his vacation in his country.

“Poland has today, not for the first time, approved an antisemitic and immoral law,” Lapid said.

Bennett: Poland chooses to continue to harm those who have lost their world

“It will not stop here,” Lapid added. “We are holding coordination talks with the Americans on ways to react later. Tonight, Poland has become an anti.democratic, non.liberal country that does not honor the greatest tragedy in human history. We must never remain silent. Israel and the Jewish people will certainly not remain silent.”

Prime Minister Naftali Bennett also issued a statement on the subject: “Israel takes seriously the approval of the law that prevents Jews from receiving compensation for property stolen from them during the Holocaust, and regrets the fact that Poland chooses to continue harming those who lost their world. It is serious that Israel will not be able to stand up to it with equality. ”

Defense Minister Bnei Gantz attacked the law and called for “All of Israel’s partners around the world condemn the law and work to repeal it:The law against Jewish lawsuits passed in Poland prevents justice for Holocaust victims and their families. “This is a serious and immoral law that I, as a son of Holocaust survivors, am shocked by.

Through this law, Poland is trying to tell the world – ‘If we delay justice long enough, we can ignore history’

Minister of Social Equality Meirav Cohen, whose office deals with Holocaust survivors, among other things, added: “The signature of the President of Poland, and the final approval of the Property Law, is another sign of Cain in Polish history. ? “It is inconceivable that in the name of the regulation of the real estate regime in Poland, the property of the Jews would be finally confiscated for the third time. First time by the Nazis, second time by the Communists and third time by modern Poland.”

The Property Law, signed today by the President of Poland, will limit the ability of Holocaust survivors and their descendants to demand their property that was stolen from them during the Holocaust. The law was passed about two weeks ago in the Polish Senate, and the signature of the President of Poland constitutes the final approval of the law. The Reuters news agency noted that the move could lead to a real crisis between Poland, the United States and Israel.

“I have decided today on an issue that in recent months has provoked a heated debate at home and abroad,” Polish President Andrzej Duda said after the signing. “After an in.depth analysis, I decided to sign the amendment to the law.” According to the language of the law, pending property claims that have not been decided in the last 30 years will be discontinued or canceled. In addition, it will not be possible to make new claims about administrative decisions made more than 30 years ago

Gideon Taylor, chairman of the World Jewish Organization for the Restitution of Property, which coordinated the international effort regarding Polish law, responded: “Today is a sad day for justice and the rule of law. “Through this law, Poland is trying to tell the world – ‘If we delay justice long enough, we will be able to ignore history, without taking responsibility and profiting in the present from the actions of the communist regime in the past'”.

The background to the legislation is that until now Holocaust survivors and their families could claim that property was seized illegally – and demand it back, but Polish officials claimed that this caused uncertainty regarding property ownership. The issue of Jewish property rights in Poland is even more complicated because unlike other EU countries, Poland has not established a compensation fund for survivors whose property has been seized.

US Secretary of State Anthony Blinken said on Thursday that Washington was very concerned that the Polish parliament had passed the bill, calling on its aunt not to sign the law or refer it to the Polish Constitutional Court. “The United States is very concerned about the passage of legislation in the Polish parliament regarding property restitution claims,” ​​Blinken said. “We urge Polish President Auntie not to sign this bill.” He added on Twitter that “our common values ​​are our mutual security.”

The Property Law was passed in parliament on Thursday and two weeks earlier passed in the Polish Senate, the upper house of parliament. Foreign Minister Yair Lapid responded: “Poland knows very well what is the right and proper thing to do. Israel is following with great concern the progress of the country’s legislative process regarding property restitution, which was stolen from Holocaust victims. Every stage in this progress is a serious development in our eyes.”

A month earlier, the law had passed in the lower house of the Polish parliament. It was then reported that the proposed legislation would harm plaintiffs, including Holocaust survivors and their families, as well as many other legal property owners, Jews and non.Jews. Approval of the law is expected to affect about 90% of restitution claims.