Biden: “Our goal was terrorism, not nation building” 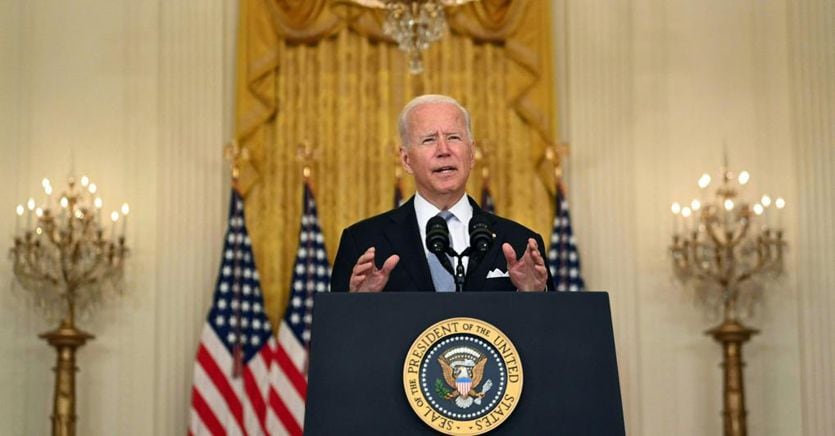 “We went to Afghanistan 20 years ago with the aim of defeating Al Qaeda and Osama Bin Laden. Our mission was against terrorism, not to build a nation. Today the terrorist threat has spread to Africa and Asia. This threat requires our efforts. We cannot stay in Afghanistan forever ”, these are the words of US President Joe Biden in his address to the nation. «The American military – continued the tenant of the White House – should not die in a war that the Afghans do not want to fight for themselves. We gave them all the tools they needed. We armed them, we gave them an air force that the Taliban don’t have, we paid them a salary. What we couldn’t give them was the will to fight for their future. The choice I had was to continue the agreement negotiated by Donald Trump with the Taliban or to go back to fighting ». Of course, Afghanistan fell “faster than expected”. However, “if necessary” the US will conduct counter.terrorism actions in the area. The US president has threatened a “devastating” response if the Taliban attack American interests, particularly during the evacuation operations underway in Kabul. In the event of an attack, the response will be “swift and powerful”. Biden is clear: “I don’t want to repeat the mistakes of the past.” The reference is obviously to Vietnam, «which I experienced firsthand. We cannot fight a civil war forever ». Diplomacy, however, works. During the day, the head of the American forces in Kabul met with Taliban leaders in Doha. All while the US State Department has asked American citizens stationed in Afghanistan to stay in shelter and not to go to the Kabul airport.

The members of the UN Security Council “have called for the immediate cessation of all hostilities in Afghanistan and the establishment, through negotiations, of a new government that is united, inclusive and representative, also with full, equitable and significant of women “. In a unanimous statement, the Fifteen “stressed that institutional continuity and respect for Afghanistan’s international obligations must be guaranteed, as well as the safety and security of all Afghan and international citizens”. The members of the Council called for “an immediate end to the violence, the restoration of security, civil and constitutional order and urgent talks to resolve the current crisis of authority in the country and to arrive at a peaceful solution”. Finally, they “reaffirmed the importance of the fight against terrorism in Afghanistan to ensure that the territory is not used to threaten or attack any country, and that neither the Taliban nor any other group or individual supports the terrorists”.

The words of Guterres

«The next few days will be fundamental. The world is watching, we cannot and must not abandon the Afghan people ». Thus began the UN Secretary General, Antonio Guterres, in the emergency meeting of the UN Security Council on the capture of Kabul by the Taliban. «I ask – he continued – an immediate end to violence, respect for the rights of all Afghans and respect by Afghanistan for all international agreements to which it is a party. In this serious moment, I urge all parties, especially the Taliban, to exercise the utmost restraint to protect human lives ”.

The UN request for moderation

The big picture is disturbing: “We are receiving chilling news of severe restrictions on human rights across the country. I am particularly concerned about the reports of growing violations against Afghan women and girls who fear a return to the darkest days. It is essential that their hard.won rights are protected. The international community – continued the Secretary General of the United Nations – must be united, we must speak with one voice to support human rights in Afghanistan. I call on the Taliban and all parties to respect and protect rights and freedoms ”. Guterres then stressed that “the international community must unite to ensure that Afghanistan is never again used as a platform or safe haven for terrorist organizations”.

Fear of women and opponents

According to Guterres, “the world is following the events in Afghanistan with a heavy heart and deep concern for what lies ahead. We have all seen the images in real time. Chaos, unrest, uncertainty. And fear. Much is at risk, the progress, the hope, the dreams of a generation of young Afghan women and girls, boys and men. The United Nations is committed to supporting the Afghans, we continue to have staff and offices in areas that have come under the control of the Taliban, ”he added. “We have a proven ability to fight terrorism effectively without having a large military presence on the ground and we will hold the Taliban responsible for not allowing Al Qaeda to have a safe haven in Afghanistan,” Sullivan added.