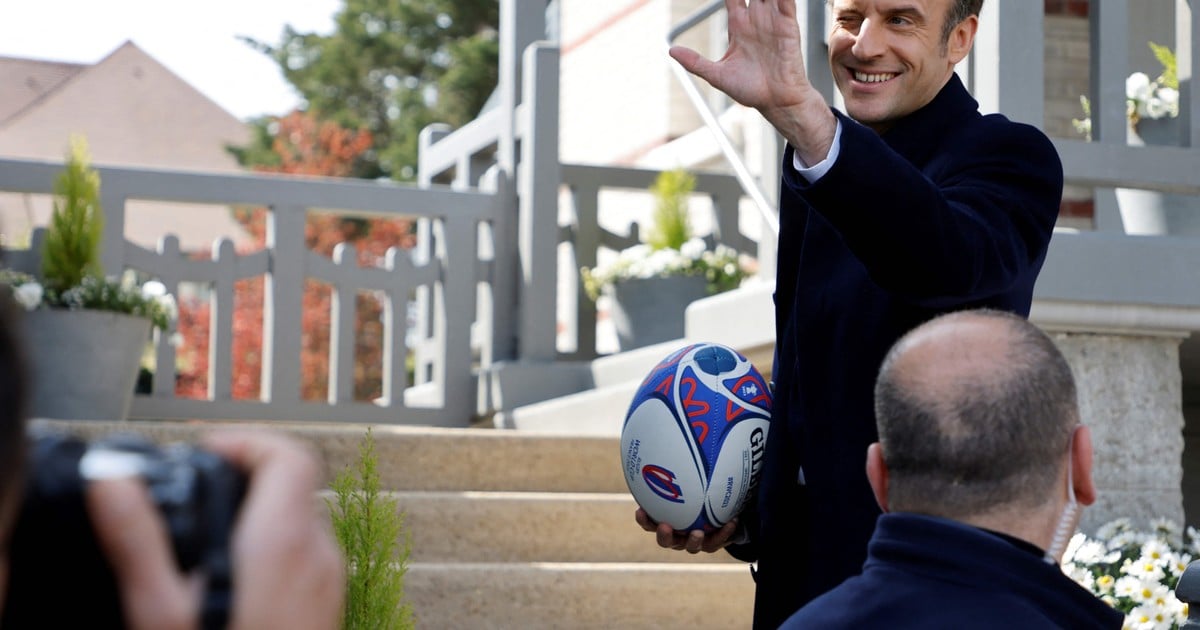 The president of France, Emmanuel Macron, voted on Sunday morning in the elections where will seek his re-election for a new mandate at the head of the Elysée Palace.

Macron, who was the last of the twelve candidates in going to his polling station, he deposited his ballot at 12:40 local (7:40 in Argentina) in the Palacio de Congresos of this seaside resort on the north coast of France where he has a residence, and outside which dozens of people waited for him. people you were greeting.

The surveys published until Friday predict that it will have to dispute the second round on April 24 with the far-right Marine Le Penwhich in the last three weeks has moved closer in voting intentions to about three percentage points.

Precisely, Le Pen had voted a little more than an hour before in Hénin Beaumont, a city in the north of the country, governed by a mayor from his party, the National Rally (RN).

Before entering the polling station, he was taking selfies with a large number of supporters waiting for him and giving greetings with an openly smiling gesture.

More discreet was the vote in the VIII district of Paris of the other great candidate of the extreme right, former journalist Éric Zemmourwho after being for months the great phenomenon of the pre-campaign, saw how his expectations were deflated in recent weeks, especially with the war in Ukraine, and his public admiration for Vladimir Putin.

The most morning of the candidates for the Elysee was the socialist, Anne Hidalgo, who voted at 8:40 local accompanied by her husband in a school very close to her home in the XV district of Paris, the city of which she has been mayor since 2014.

The radical left’s pretender, Jean-Luc Mélenchon, was greeted with some applause on his arrival at 10.45 at his polling station in a Marseille infant school.

Mélenchon is running for the third time in a row and is the oldest candidate of the 12 running for the Elysée (70 years old). The surveys published until Friday placed him in third position after Macron and Le Pen, which if fulfilled would leave him out of the second round.

The right and the extreme right face each other in these elections, where abstention will be the new militant protest vote. Some believe that it could exceed 32 percent and thus decide who wins or loses the elections.

If none of the 12 candidates get 50 percent of the vote, they will have a ballot on April 24.

There will be a peculiarity: it will not be a classic and traditional French election. The Socialist Party is on the brink of extinction, along with Valérie Pecresse’s conservative Republicans.

The new political figures are Macron, who is seeking re-election for the last time, and Le Pen, a xenophobic figure, seems softened by Zemmour’s anti-Islamic extremism. A candidate of Jewish origin, deeply anti-Muslim and anti-immigrant, who has scared the electorate, who leaned towards Marine.

Could she win? Unlikely, if the pollsters are to be believed, although it can no longer be ruled out. It would be the biggest surprise since at least 1981, when François Mitterrand came to power, after allying his Socialist Party with the French Communists.

However, even if Macron wins a second term, his troubles will be far from over. They could get worse. A resurrection of the Yellow Vests could return, to face the very high cost of living the reforms that he wants to carry out with retirement, and challenge him in the street when they couldn’t beat him at the polls.