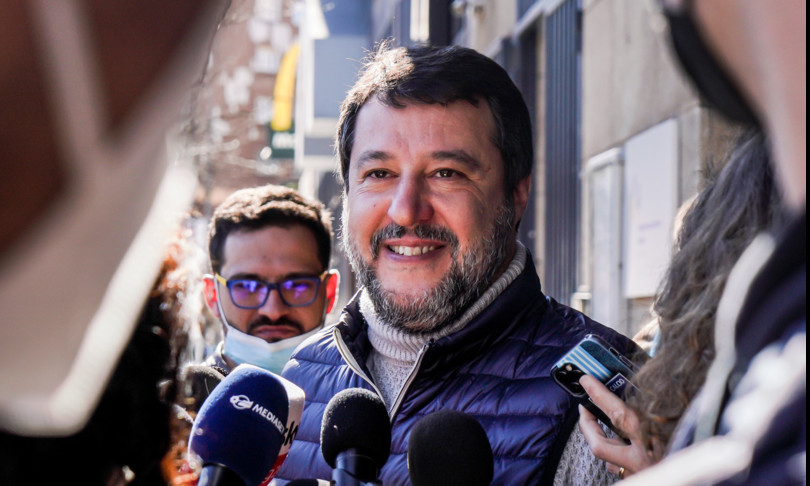 The center-right will not vote on the tax proxy if the text of the law remains the current one. The ‘threat’ comes from Matteo Salvini, who, from Palermo where he is for the Open Arms trial, raises the internal tension in the majority on a flag theme of the center-right.

Forza Italia is more cautious, with Antonio Tajani asking the government not to place trust in the provision, and, with Mariastella Gelmini and Renato Brunetta, hopes that common sense will prevail and an agreement will be reached in the meeting between Mario Draghi and the leaders of Lega and FI which should be held next week.

Enrico Letta immediately replies to Salvini’s words, denouncing the “propaganda hoax” of the center-right on the alleged increase in taxes which would involve the fiscal delegation, denied more than once by the Prime Minister himself.

“We asked for a meeting at Palazzo Chigi, with Draghi, not only as a League but also as an entire center-right. In the tax provision it is written that an increase is hypothesized with the dual system of taxes on Bots, Government Bonds, on the dry coupon , on rents “, says Salvini instead.

“With the reform of the land registry, taxes on houses increase, with repercussions on the ISEE and on public contributions and on families – he adds -. There is a war and a pandemic still going on, yet the tax increase does not seem to me to be the case. I am pleased that Draghi says, in words, that he does not want to raise taxes, but the League and the center-right cannot vote on a document that says that taxes will increase “, he adds.

I asked the president Mario Draghi for another thousand euros for families who are unable to pay their bills, but also to support businesses that are unable to make it to the end of the month. Thinking of raising taxes is absolutely unthinkable “.

“A propaganda hype about non-existent tax increases starts from the right. It is good to be clear. The only increases that we undergo and risk undergoing have only one responsible, Putin and his war, do not try to turn the omelette upside down. We will not allow it, “Letta replies on Twitter.

“In these hours there is a dangerous and wrong attempt in terms of timing, tone and content, to create a staged propaganda – adds the secretary dem – on the fact that there would be an elusive party that wants to increase taxes on the house. and a Robin Hood who wants to avoid this. Outside of metaphor: Draghi, the government and us who support him would like to know what increases and Salvini instead defends the citizens from us bad: it is a gigantic lie “put in place to” prevent talk of Putin, of the war and of the faults which are all of Putin “.

Opening the Forza Italia convention, where Silvio Berlusconi’s speech is expected tomorrow, Antonio Tajani assures that from FI there will be “no reverse on justice and taxation”.

“Forza Italia wants the government to go ahead until the end of the legislature, but there are two questions currently open – he explains -. On the reform of justice we ask for the separation of functions, the conclusion of the season of revolving doors that allow magistrates to enter and exit from politics and a different electoral system for the CSM. As regards the land registry, we do not want the reform to result in a drain on homeowners “.

The position of the Minister for Regional Affairs is softer, Mariastella Gelmini. “I think it is right to respect the leadership of the Parliament, certainly Forza Italia trusts the words of the Prime Minister and that this government doesn’t want to raise taxes, “he says.

“We are confident that a meeting with President Draghi will reassure the parties and allow the government to continue working”.

The other government blue, Renato Brunetta, is also confident. “With government work, common sense will prevail,” he says.

“On the part of Lega and Forza Italia there is an irresponsible attitude that is putting the Draghi government in objective difficulty in one of the most delicate moments in recent national history”, complains instead, the group leader in the Chamber of Leu Federico Fornaro.

“The land registry reform is a measure of fiscal equity touted by the center-right as a new tax on housing. The land registry reform does not mean an increase in taxes, as Fi and Lega keep repeating wearily, but to make people pay housing taxes. all fairly “. From the opposition, Fratelli d’Italia confirms that it will vote against the tax delegation.

“During the election campaign, the Brothers of Italy made a commitment with the voters to fight against any tax increase – comments Francesco Lollobrigida -. All the more so in this moment in which there are businesses and citizens in distress, we ask all forces of the center-right to do the same and oppose. This is what we promised our voters. ”