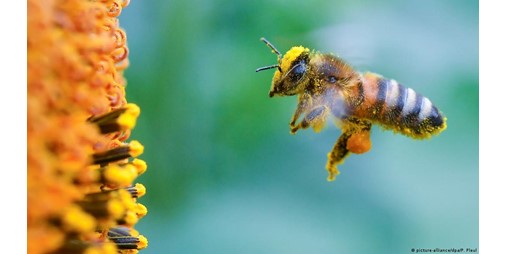 Away from the flower fields that are their natural habitat, honeybees that are endangered by pesticides used in rural Colombia, find a safe haven at several universities in the capital, Bogota.

Exceptionally, universities were allowed to incubate beehives for scientific research purposes, although the establishment of these hives in the city is prohibited for fear of the danger of stings to humans.

Inside the University of Rosario, biologist Andre Riveros gives a bee sugar water and watches how it stretches its straw-like tongue toward the water to drink.

The university resides on its roof dissolved within six-meter-high bamboo fences surrounded by trees and flowers.

Here, Riveros and his team are studying a colony of bees, with the goal of developing a nutritional supplement that protects bees from pesticides.

“Insecticides affect some (neural) areas of bees, affecting the learning and memory process, which ultimately leads to damage similar to that caused by Alzheimer’s disease,” Riveros told AFP.

“We are trying to find a solution to the problem of bee extinction,” he continues, adding that “our quest to protect bees is the core of our work.”

The team’s work focuses on the Western honey bee, one of the 20,000 known species in the world.

Hundreds of beehives were destroyed in Colombia over the past years, while investigations indicated that fipronil caused the death of bees, an insecticide banned in Europe and limited in uses in the United States and China.

Fipronil has been widely used to make profits from Colombia’s lucrative avocado and citrus production, although the Latin American country suspended its use in some crops for six months last year.