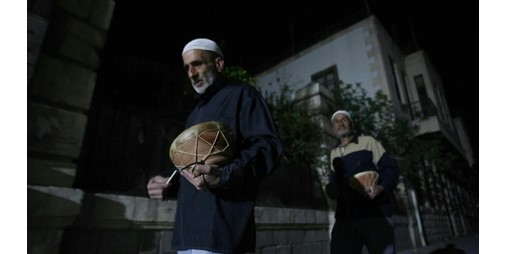 An hour before the call to prayer of the Great Umayyad Mosque in Old Damascus, the voice of Al-Masharati Hassan Al-Rashi resounds as he calls “O sleeper, unite the dime” to wake the fasting people to eat the Suhoor meal, in a continuous Ramadan tradition in popular neighborhoods in Syria.

Every night in the holy month of Ramadan, Hassan, 60, and his friend Sherif Rasho, 51, go out, roaming narrow alleys, breaking the prevailing calm, by striking a drum to wake the fasting people. They are a sample of about thirty magicians who preserve this tradition in Damascus.

“Despite the presence of mobile phones and different technologies, people like to wake up to the sound of Al-Masharati,” Hassan, 60, told AFP.

“Al-Masharati has become part of the customs and traditions of the people of the Levant in the month of Ramadan, and this is a heritage that we will not leave behind.”

Between bright and dark neighborhoods, Hassan moves with his friend. In his right hand he holds a stick made of bamboo, and in the other hand a small drum made of pottery and covered with goatskin. He walks with quick steps in the alleys, and knocks with his stick on the doors of those he knows, and they ask him in advance to wake them up. And sometimes he mastered the percussion of the drum in a rhythmic way.

He explains, “We feel joy when we go out every day. Sometimes, some children follow us and ask to beat the drum and repeat the call ‘Get up for your suhoor… come Ramadan to visit you’.”

Minutes before the call to prayer rises, Sharif knocks on the door of one of his neighbors to drink a glass of water, anticipating the start of the fast for a new day.

The Mesaharati may sometimes carry in his hand a basket of straw or a bag of cloth to put whatever food may be offered to him. In general, he does not receive any financial compensation.

“My equipment is simple, my voice, my drum and my stick (…) I have not stopped performing this duty for nearly a quarter of a century, even during the war or the outbreak of Corona,” Sharif told AFP.

The man, who has become gray with his light beard, adds, “I will keep waking people up for Suhoor as long as I have a voice in my throat capable of rising and screaming. It is a trust that I carried on behalf of my father and I will carry it to my son.”