“Women dumped their babies, it was awful”: Documentation — 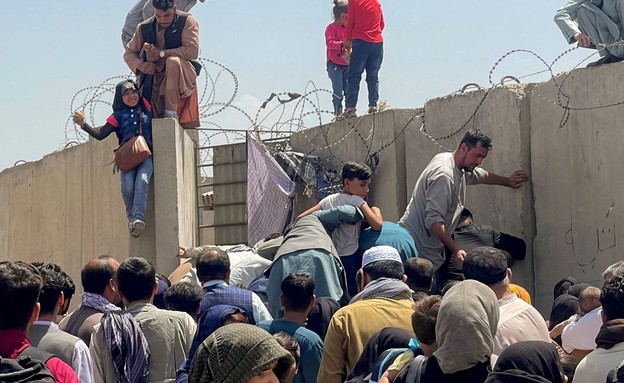 Heartbreaking scenes: A senior British officer in Afghanistan reported from the field to the Sky News network on extremely harsh scenes, of women throwing their babies at British soldiers as they left the country – in order to save their lives from the Taliban. “They literally threw them over the barbed wire fences, it was awful,” he said. “Some of the children were actually trapped inside fences,” the officer described.

The testimony caused a stir in Britain: Defense Minister Ben Wallace said in a media broadcast in the country that despite reports – the British army would not take any child out of Afghanistan alone. “When evacuating refugees from Kabul, the UK government cannot simply take a minor,” Wallace said. “In the videos I saw, these are families that have gone through in their entirety. So far, we have taken 120 families off the planes, and another 138 families will leave Afghanistan later.“

In recent days, tens of thousands of people have been seen crowding around Kabul airport, in a last desperate attempt to escape from Afghanistan following the Taliban takeover. In materials that went viral on social media, masses of civilians were seen crammed into the floor of military planes as well as those clinging to the wheels of planes that left the country – and fell to their deaths.

Meanwhile, Virginia Gamba, the UN Secretary – General’s Special Representative for Children in Conflict, stressed Afghanistan’s danger to children. “I am appalled by the continuing levels of violence and injustice suffered by children in the country,” she said. “I call for an end to all abuses, and call on the Taliban and all other parties to live up to their commitments to international humanitarian law.“

She claimed that armed organizations, especially the Taliban, were responsible for most of the incidents and atrocities in the region. “All parties should immediately take the necessary steps to minimize harm to children, prioritize protection for them and schools and hospitals.” She added that “the childhood of the Afghans has already been taken away from them, especially of the girls.” She added a call for the organization to “refrain from recruiting, abducting and killing children.“