Russia has banned Boris Johnson from entering the country

The Russian Foreign Ministry has announced a ban on entry into the country for British Prime Minister Boris Johnson, Foreign Secretary Elizabeth Trass, Defense Secretary Ben Wallace and 10 other politicians and members of the British government, Reuters reports.

Reuters reported that the move was taken “in light of the unprecedented hostile actions of the British government, and in particular the imposition of sanctions against senior Russian officials”.

Russia has announced that it will expand the list soon.

Deputy Prime Minister of Ukraine Irina Vershchuk announced that nine humanitarian corridors will be opened today (Sat) across the country. According to the Reuters news agency, the evacuation plans include civilians fleeing Mariupol in private cars. Five of the nine humanitarian corridors will operate in the east, in the Luhansk region, which according to local sources is now under heavy shelling.

Local media in Ukraine report casualties in Poltava, Swarodontsk and Lisiskansk following Russian shelling, according to the “Kyiv Independent”. Luhansk Oblast Governor Serhiy Haidai said one person was killed, three were injured and a gas pipe exploded due to a Russian shelling during the night in Swarodansk and Lisikansk.

A man was reportedly killed as a result of the shelling in Poltava as well.

Kyiv also came under fire. Kyiv Mayor Vitaly Kalishko announced in his telegram channel that “the explosions took place in the Darnytskyi district on the outskirts of the city. The rescue and medical forces are now operating on the spot. The data on the victims are clear. For beer, I ask you to avoid it and stay in safer places. ”

Alarms from airstrikes have been heard again in recent hours in various cities and regions, including Kharkiv, Zaporizhia, Donetsk, Kriviyya and Dnipro.

More than 900 civilian bodies were found in the area around Kiev after the withdrawal of Russian forces – almost all of them were shot dead, according to the AP news agency.

This is double the number announced by the authorities about two weeks ago, and the presence of gunshot wounds indicates that many of the civilians were “simply executed,” police said. 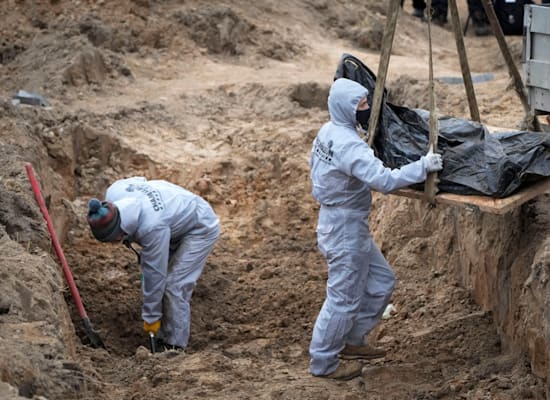 Andrei Nabitov, head of the Kyiv regional police force, said the bodies had been abandoned on the streets or temporarily buried. According to the AP report, Nabitov cited police data indicating that 95% of the deaths investigated are as a result of gunshot wounds. “As a result, we understand that under the occupation, people were simply executed in the streets,” he said. According to him, every day more bodies are found under the rubble and in mass graves.

To date, the largest number of bodies has been found in the town of Bocha, where more than 350 bodies of civilians have been located.

According to Nabitov, workers in Bocha collected and buried bodies while the town was under Russian control. Russian soldiers, he said, “located” people who expressed strong pro-Ukrainian views.

Zalansky warns against Russian use of nuclear

Ukrainian President Volodymyr Zalansky said in an interview with CNN that the world should be prepared for the possibility that Russia will decide to use nuclear or chemical weapons against Ukraine. According to him, the Russians may do it because Putin does not value human life.

“We need to think, not be afraid – but be prepared. But this is not a question for Ukraine, not just for Ukraine but for the whole world, I think,” he said.

Sources in the United States have already warned of the possibility that Putin will use nuclear weapons in the conflict. “Given the potential despair of President Putin and the Russian leadership, and given the failures they have faced so far militarily, none of us can take lightly the threat posed by the potential use of tactical nuclear weapons or low-power nuclear weapons,” CIA chief William Barnes said in a statement. Fifth.

Zalansky said during the interview that according to the information in his possession, about 2,500-3,000 Ukrainian military personnel were killed, while the Russian army lost about 19,000-20,000 people. He said about 10,000 Ukrainian soldiers had been wounded, some seriously.

At the same time, alarms warning of airstrikes were sounded in Ukraine during the morning. The sirens were heard in the capital, Kyiv, as well as in the central and western regions of the country, including Levib and Zhytomyr.