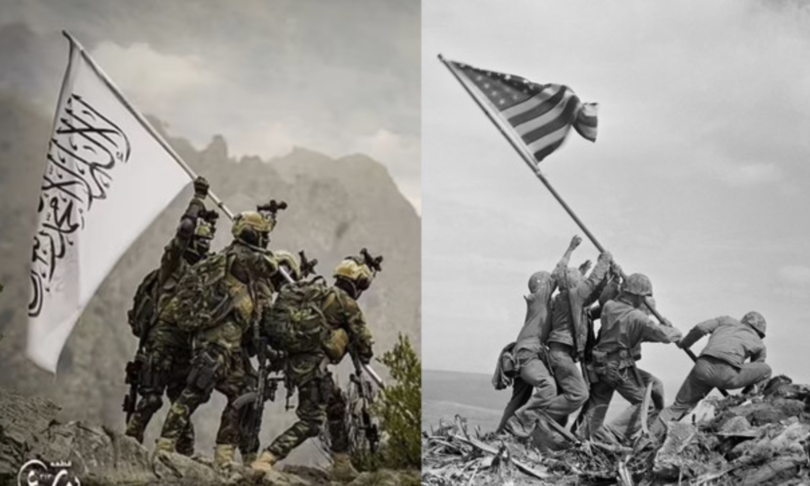 After conquering Afghanistan in the blink of an eye and taking possession of the weapons, vehicles and equipment left by the American military, the Taliban now enjoy making fun of the US.

Taliban fighters are seen in some propaganda videos with American uniforms and weapons in hand patrolling the streets– If it weren’t for the language they speak and the long beard, they would appear to be US soldiers- They also have the classic sunglasses- But they are Taliban- And they also belong to a special unit called Badri 313-.

In a video posted on Twitter they are seen running around the streets and entering a house, just like in Hollywood movies- There is also a photo in which the derision refers to an episode of the Second World War: the Taliban with the uniforms of American soldiers plant the white flag of their movement in the ground exactly as in the historic shot of the marines planting the flag- stars and stripes on Mount Suribachi during the battle on Iwo Jima Island in 1945.

Between 2002 and 2017, the United States supplied $ 28 billion worth of weapons and equipment to Afghan forces- But now “everything that hasn’t been destroyed is in the hands of the Taliban,” an American source told Reuters- The Taliban also have sophisticated aircraft of the US military in their hands, abandoned in a hurry- Even if they will have some difficulty in using them, these means represent a very interesting tool from the point of view of propaganda.