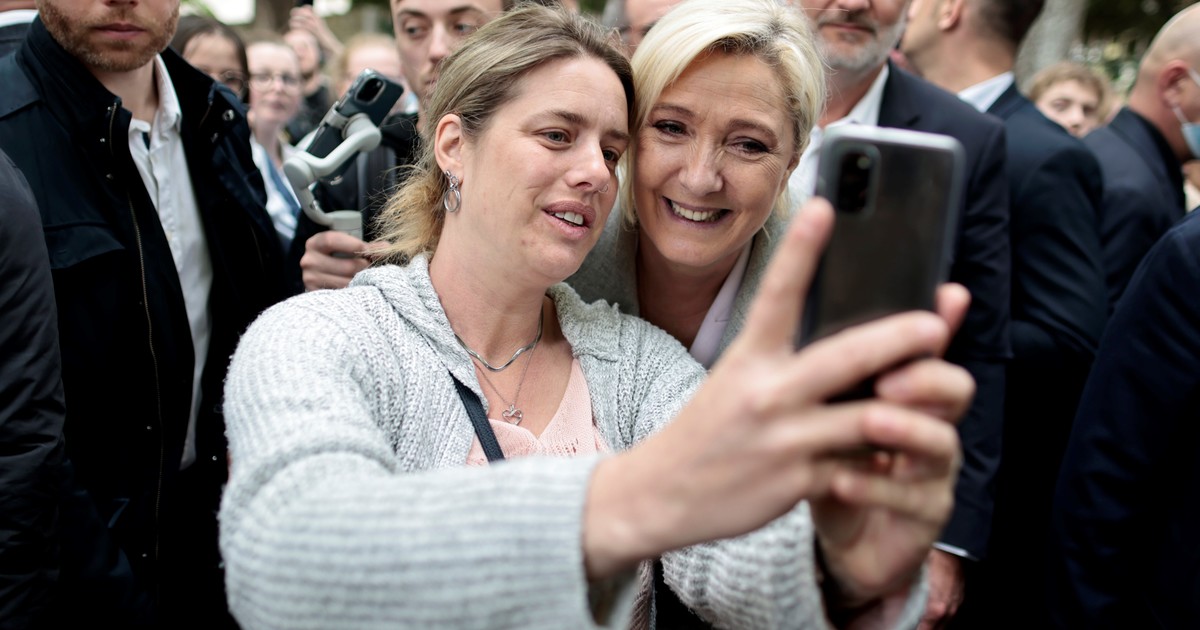 With the French enjoying the spring “Holy Monday” holiday, presidential candidates Emmanuel Macron and Marine Le Pen prepare to the next big fight. The presidential debate on Wednesday night, the most difficult test of the campaign for the National Regrouping candidate.

President Emmanuel Macron trains at the Elysee, without giving up his activities as head of state. But this holiday will be dedicated toto preparation of the debate in The Lantern, theto residence in the garden of Versailles.

Le Pen left for Rouen and then settled in the country, with friends in the west of France, to kick back and relax before wednesday. She believes that the failure of her last debate was because she was “very tired” after the campaign.

The scenario will be different: both candidates will be separated by 2 meters fifty and the journalists will meet four meters apart. More than 16 million French people are expected to watch the debate.

A difficult debate for Marine

The leader of the former National Front must show that It is not the Marine of 2017, which Macron demolished like a teacher facing a bad student. A new tone, one that is neither anti-republican nor rabble-rousing, respect for the interlocutor and make no mistake with the figures of your own electoral program, if you want to be credible. Your biggest problem is your image of incompetent. She has had 5 years to change it.

If he seeks to seduce his popular electorate, he will have to give a coherent response to his delusional and populist proposals on purchasing power, the abolition of taxes and a retirement at 60 years of age, which it is no longer fundable.

Economists and constitutionalists believe that Marine Le Pen’s program it’s just “unfeasible”. A sum of populist proposals, which it intends to impose by referendum and ignoring the French Constitution. That will be his first difficulty if he reaches the government. The Constitutional Council, the highest legal body, may annul them one by one and she will not be able to govern.

His idea of ​​creating a “national priority”, in terms of employment, aid and social housing, and suppressing the residence authorization of all foreigners who have not worked for more than a year and throwing them out of the country, is unconstitutional. The first act of government of Le Pen can generate a constitutional crisis No history in France.

His anti-Europeanism can give rise to another conflict: a major crisis in the EU, when the war is taking place in Ukraine and she is favorable to Russia and Vladimir Putin. Until now she has not condemned the Russian invasion of Ukraine and her campaign is financed by a Hungarian bank, at Putin’s request.

Knowing that Brexit was a failure in Great Britain, he thinks blow up the EU from within. It no longer promotes withdrawing from the European Union or NATO but modifying them. He has changed his speech but not his “Frexit” ·, in ambush.

Marine Le Pen plans to blow up the EU from within. Photo: AP

To fight against foreign competition, it is going to reinforce the barriers against imported goods under strict regulations and it wants toxcluir to agriculture of free trade agreements, such as the Mercosur.

These are all measures that are going to exasperate Brussels when France is a net contributor to the European budget. His country represents 5 percent of the world’s GDP and Le Pen seeks to break the alliance between France and Germany.

Among the relatives who will help her prepare are Philippe Olivier, her special adviser, Renaud Labaye, her chief of staff, and Christophe Bay, her campaign manager.

In these hours there will be training of LePen. An ENA graduate will play the role of Macron on the ring side of the debate.

In Avignon, Le Pen wanted to win over the left and reminded them of “the president’s contempt for the French people.” Photo: AP

In Avignon, Le Pen wanted to conquer the left and reminded them “The president’s contempt for the French people.” You will not be able to repeat it if you do not want to lose. Marine will not be able to give in to provocation, to the Chicana. If she does not achieve political maturity, a height of head of state, Macron will be able to destroy her, as in 2017. A ridicule that lasts until now, given the expectations of the new debate.

The president returns to his faithful to prepare for the great debate: his agriculture minister, Julien Denormandie, Alexis Kohler, general secretary of the Elysée and Ismaël Emelien, co-founder of ‘En march’, his party, and former adviser to the president.

If there is something that Macron knows how to do, it is to debate. he loves it. He will remind Le Pen of his inconsistencies, his change of heart, his threat to expel foreigners, his xenophobia, his link to Putin.

But you must contain your arrogancetheir derogatory “little phrases”that the French detest from his personality, the idea that he defends the interests of the most powerful when he must conquer the Melenchonists who want to vote blank and the abstentionists.

“We are going to remember what France would be like today if she had been in charge and point out all the changes in her project on the European Union, on pensions, on Russia,” said one of Macron’s advisers.

The head of state will seek to repeat what he already announced on his tour to Mulhouse, in the Great East, where the COVID pandemic was tremendous, with a large number of deaths. Le Pen “I was going to treat people with chloroquine and with an ineffective Russian vaccine,” Macron recalled on April 12, in front of nurses.

A choice of civilization

In Marseille, Emmanuel Macron launched another lethal phrase against Le Pen: “It is a civilization election” that will be played next Sunday.

“The election before us, you have understood, is not simply the election of a President of the Republic. It is in fact a choice of civilization“, affirmed the head of state. He called on his supporters “not to whistle at the extreme right but beat her April 24th”.

Although the gap in the second round between the candidates is relatively smallthe president has chosen to dramatize his re-election.

He never mentions Le Pen or her party but recalls the National Front, as the party was called before it was renamed, in his dediabolization process.

The constitution at the center of the debate

While Marine Le Pen calls for a “referendum revolution”, believing that “only the people should have the chance to review the Constitution”, and not Parliament, Emmanuel Macron launched a new attack.

Pointing the finger at Budapest and its president, Viktor Orban, Emmanuel Macron referred to Le Pen’s November visit to Hungary. There she was very warmly received by the Hungarian president, who is subject to sanctions from the European Commission for not respect the rule of law.

Russia and Ukraine will not be left out of the debate either. So far Macron has avoided it. But her spokesman Gabriel Atta accused her today: “Vladimir Putin is in you everywhere: in your bank accounts, in your advertising, even in your program when you talk about an alliance with Russia,” the secretary of state launched.

“For or against our Republic.” That will be the basis of Macron’s debate with Marine Le Pen. He will denounce that she wants to reform the Constitution without respecting it and her “verbal violence” and that she “does not want to see people who do not think like her.”