Spd (Olaf Scholz) in the lead in the polls, for the first time since 2006 passed the CDU but it is too early to claim victory 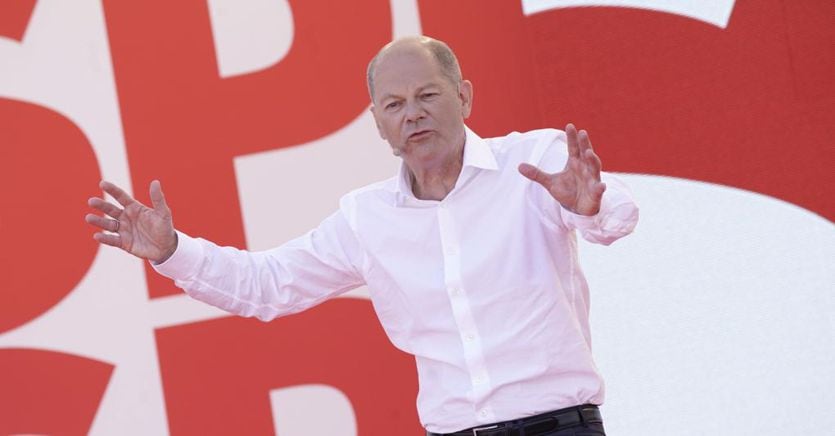 Pre-election turnaround in Germany. One month and one day before the elections, the Social Democratic Party SPD surpassed the CDU / CSU Union by one point in the Forsa poll on Tuesday 24 August, reaching 23% (from 21% last week) against 22% for the party of Angela Merkel (down 23%).
The SPD overtaking on CDU had not happened for 15 years. Once the forecasts for the start of the electoral campaign have been thrown off – when it was the Greens who posed themselves as the great threat of the Union -, the uncertainty of this unconventional call to the polls rises, in the post-Merkelian pandemic era, without the reassuring “Mutti “.

The Greens are the third party with 18%, down by one point. The Liberal Party Fdp is at 12% and could become the ruler in a three-party coalition. The far-right Afd party remains at 10%, and no longer seems able to take any sprint; after falling back from a peak to 12%, its federal-scale weight is settling at 10%. Die Linke’s radical left in the Forsa poll is at 6%.

A personal victory for Olaf Scholz

More than the SPD, it was actually the Finance Minister and Vice-Chancellor Olaf Scholz, who is by far the candidate for the chancellery favored by the voters, topping the rankings of German voters’ preferences. In the polls on the preference for the next chancellor, he is more popular than Armin Laschet (leader of the CDU) and Annalena Baerbock (co-leader of the Greens).

One of the legacies of Angela Merkel, who was Chancellor for 16 years which are four consecutive terms, is that she has re-accustomed public opinion to giving great importance to the leading role of the Chancellery, as in the days of Helmut Kohl.

It cannot therefore be excluded that both the voters of the center-left current of the CDU / CSU Union, who do not see Laschet at the helm of the country well, as well as the voters of Bündnis 90 / Die Grünen who do not consider Baerbock up to the chancellery, are willing to vote SPD in order to hand over the leadership of the country in the hands of the moderate Scholz. The Social Democratic politician is in the role: and increasingly behaves in the election campaign as a sort of “Vati”, after Mutti Merkel.