Delta variant, is a new global alarm for unvaccinated pandemic and risk 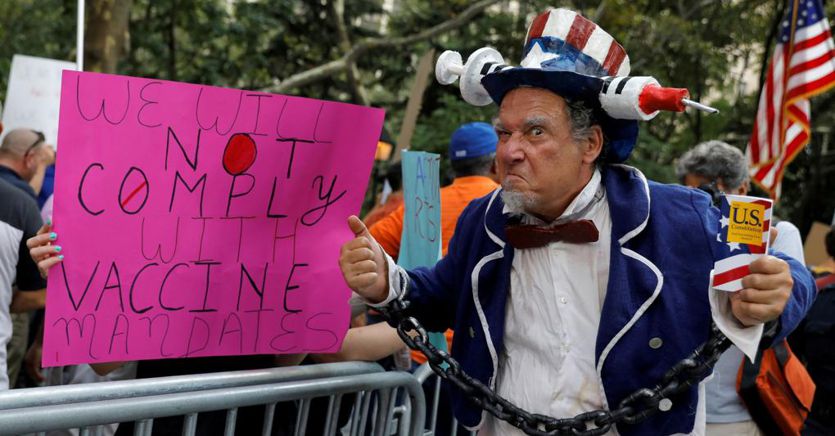 The global alarm for Covid is growing. The Delta variant, more contagious and serious, stretches increasingly dense shadows from the United States to Europe, from Israel to Australia. A contagion that triggers new public health emergencies and puts pressure on hospital systems, in the poorest regions still with inadequate access to vaccines, prevention and treatments, as well as among the more developed countries and their recovering economies.

There are 658 thousand daily cases in the world, 151 thousand in the US

The figures measure the resurgence and impact of vaccines. The new average daily cases worldwide in the last week reached 658 thousand, up by 3% over 14 days, and deaths exceed ten thousand, up by 2%. One of the biggest spikes from July to today is in the United States: more than 151,000 cases per day, an average increase of 28%, equal to 46 per 100,000 inhabitants compared to 18 in Europe. Deaths exceed a thousand per day, up 84 percent. The shelters are close to 80% of the winter peaks. And the incidence of infections on children is of particular concern: in the last week there were 180 thousand, close to the worst peaks of the pandemic. Although, as President Joe Biden repeats almost daily hoping to encourage prevention, this is now “a pandemic of the unvaccinated”: the CDC, the Center for the Control and Prevention of the Virus, recalls that in the US, partial data at early August, 99.99% of fully vaccinated people had no cases that ended up in hospitalization or death.

Israel, “patient-zero” of the Delta

The zero-patient for the new crisis was perhaps Israel, which has recently seen daily infections rise to around 10,000 a day. The success of its initial vaccination campaign – it was the first country to fully inoculate the majority of the population – met with a combination of rapid reopenings, drops in vaccine protection after perhaps six months and the advent of the Delta variant. It is now among the very first countries to offer booster doses of the vaccine, reporting at least initial effective results.

But it is the new US crisis that has become perhaps the most emblematic of the risks still present. Over 90,000 patients are hospitalized for Covid nationwide, a number second only to that of last winter’s peak. At least five US states have now run out of places in intensive care units. “If we manage to spend the winter and vaccinate the vast majority of the unvaccinated population, I hope we can have good control of the situation by the spring of 2022,” said epidemiologist Anthony Fauci, a councilor to Biden, cautiously. The most recent studies by the Federal Center for Diseases confirm the concentrated epidemic among the unvaccinated when it comes to acute illness: the probability of admission to hospital is 29 times higher. Furthermore, between June and July the hospitalizations of non-immunized people cost the US health system 2.3 billion, draining resources also to treat other diseases.

Washington is now counting on the definitive and no longer emergency approval of the vaccine created by Pfizer-BioNTech to launch a mandatory or at least strongly incentivized vaccination campaign: the green light from the federal authorities of the FDA to Pfizer was accompanied by a chain of announcements from institutions and companies on immunization obligations, from the Pentagon for the military to schools in New York and numerous universities, from the CVS pharmacy chain to the Ford group and Goldman Sachs in high finance. Delta Airline will raise required health contributions from unvaccinated employees. Biden, who had already effectively introduced a requirement for federal employees and suppliers, has openly called on Corporate America to exercise a leadership role in requiring the vaccine from workers and consumers.