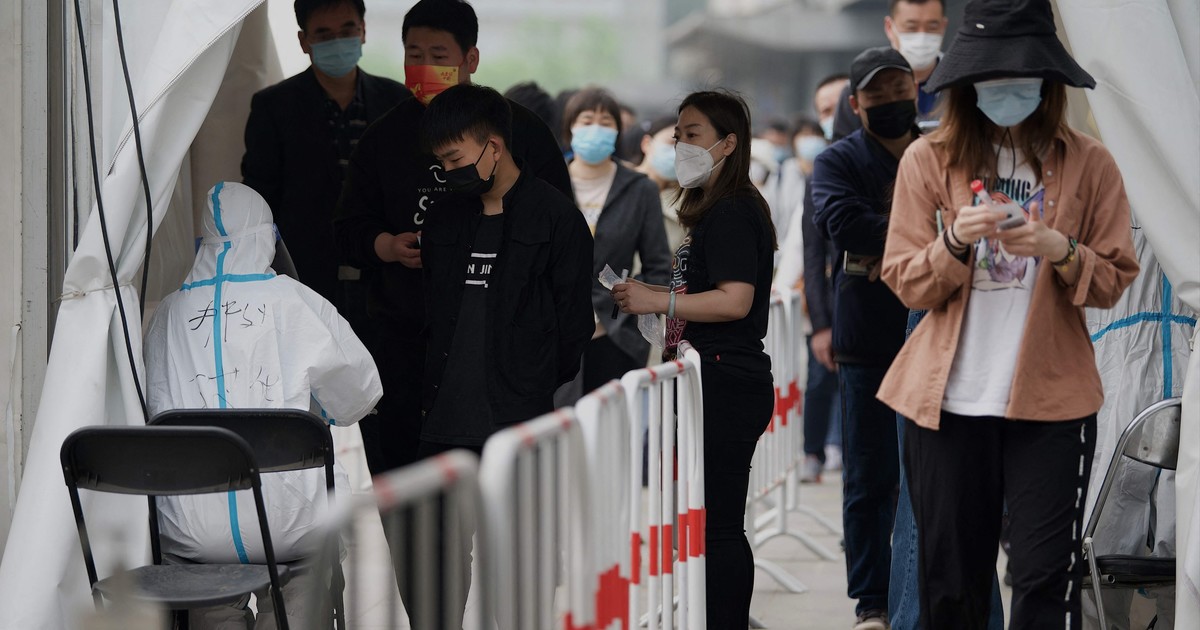 BEIJING — Families in Beijing scrambled to stock up on food.

A new coronavirus outbreak in China’s capital has raised concerns that Beijing could become, after Shanghai, the next mega city China to stop life to contain the spread of the Omicron variant.

A medical worker in a protective suit takes samples from a resident, in Beijing. REUTERS/Tingshu Wang

The central government has relied heavily on lockdowns despite their high social and economic costs, in pursuit of the Communist Party leader’s “zero COVID” strategy, Xi Jinping, to eliminate infections.

On Monday morning, the National Health Commission said they had found 47 cases of coronavirus in Beijing since Friday.

Three-fifths were in Chaoyang district, which ordered all 3.5 million residents to take three PCR tests over the next five days.

Mass testing in response to initial coronavirus cases has at times been a prelude in other cities of strict closures, such as the four-week lockdown in Shanghai which has prompted widespread complaints from residents there.

The outbreak in Beijing, the Communist Party’s seat of power and a teeming metropolis, has added meaning for Xi, who has ordered the nation’s capital to remain virus-free.

A prolonged blockade there would increase political and economic pressures on his government.

“Chaoyang District is now the main focus for pandemic prevention,” Cai Qi, secretary of the Beijing Communist Party and a protégé of Xi, said in instructions quoted in the official Beijing Daily newspaper on Sunday.

Cai seemed determined to show that Beijing I would not hesitate in taking steps to quell infections, which has been a criticism leveled by some in Shanghai.

“Important measures against the pandemic cannot be left waiting until the next day,” Cai added.

“All the sites at risk and the people involved in these cases must be checked on that day.”

The cases have been spreading in the community for a week, with multiple rounds of transmission, Pang Xinghuo, deputy director of the Center for Disease Control and Prevention in Beijing, said at a news conference on Sunday.

Chaoyang is the district more fashionable of the city, with numerous luxury shopping malls and exorbitantly expensive apartments.

At Shin Kong Place, a shopping mall with brand-name stores such as Chanel, Saint Laurent and Versace, long lines quickly formed at the expensive supermarket as families scrambled to make food storage.

At a streetside PCR testing booth a block away, several dozen people were still in line at 8 p.m. Sunday, when staff members inside, wearing full-body white hazmat suits, They announced they would close for the night.

The closure of the booth drew the ire of people waiting in the dark for tests, the results of which are usually delivered within 12 hours.

Many yelled at the staff, and several punched and kicked the booth and tried to open the door and argue with the staff.

Chaoyang had not required residents to get tested on Sunday night instead of Monday.

But without the new test results, residents they cannot take a train or a flight to another city before a possible closure is imposed.

When Beijing had a small outbreak in the summer of 2020, people flocked to train stations to get out of the city before they could get caught up in it.

Officials in Beijing hope to avoid the experience of Shanghai, where a suffocating lockdown this month dragged on China’s economic prospects and sparked the public wrath.

Residents have shared somber and critical stories about the closure through online letters, a rap song and a dark video.

“Shanghai residents feel that there have been many absurd, embarrassing and even cruel compulsory measures,” said Ji Xiaolong, a resident of the city, who has publicly criticized the government’s handling of the lockdown.

“At the beginning of the lockdown, 80% of the people approved of it and the government’s policies,” Ji said in a telephone interview, pointing to difficulties in obtaining food and medical care.

“Now, I would estimate that less than 20% still supports the government blockade.”

Party leaders, however, seem determined to defend their goal of “zero COVID”: virtually no infections overall in Chinese society.

The city has allowed residents of some areas considered safe to leave, but leaders warned that broader restrictions must remain in place until infections are eliminated.

“The pandemic will not wait for people, and you cannot think about putting your feet up and taking a breath.”

Residents in Shanghai’s Udong district shared images over the weekend of new metal fences and barriers cages that go up around apartment exits, part of the district’s push to enforce “hard” insulation for closed buildings.

A high point of public backlash against the city’s policies has been “sounds of april“, a six-minute video that, against the melancholy music and black-and-white aerial footage of Shanghai, reproduces the voices of residents asking officials for help.

The video spread quickly and widely on Chinese social media last week before censors took it down.

It starts with Shanghai officials saying last month that It would not be necessary a lockdown and then that it would last only a few days.

Then comes a montage of voices: a trucker carrying food for the devastated city, saying his shipment is in danger of rotting because no one has come to receive it; a son who says his elderly and sick father was denied hospital care; a resident forced to quarantine in an unfinished hospital; a local official asking for understanding from a man whose pleas for medical care have gone unanswered.

The video quickly spread among Shanghai residents, reflecting the widespread disdain by official media reports of the crisis, Ji said.

“This video brought out the fig leaf of these forces,” he said.

“At this point in the crisis, the people of Shanghai have started to come together.”

Some critics of the Shanghai response are high-ranking members of the academic establishment who generally keep their views quiet.

In a presentation to the government that was reported in the Chinese media, Tang Xiaotian, a professor at the Shanghai University of Political Science and Law, warned that officials should avoid potentially illegal to confine people.

Residents have been angered by measures such as the barriers around apartments that could make it difficult to escape in the event of a fire, he said.

Official propaganda about the shutdown in Shanghai had “damaged the government’s credibility,” wrote Liu Xiaobing, a professor at Shanghai University of Finance and Economics and a member of China’s national legislature, in an essay shared on Chinese social media as well. removed later.

He did not respond to an email seeking comment.

“They never worry about being called to account for the damage caused by unlimited restrictions.”