More than 60 killed, including 12 American soldiers, in a terrorist attack — 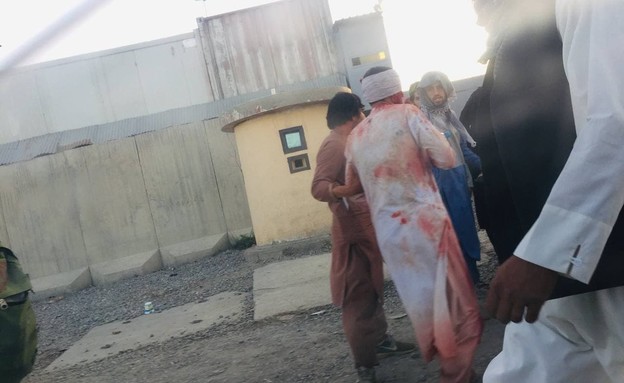 Dozens killed in a combined ISIS terrorist attack at Kabul Airport: At least 60 people, including 12 American soldiers and children, were killed tonight (Thursday) and 143 were injured in a suicide bombing near the airport in the Afghan capital. The Islamic State claimed responsibility for the attack, which involved two suicide bombers who exploded in two different hotspots – as well as shooting at civilians and soldiers who were at the scene. Following the events, the meeting between President Biden and Prime Minister Bennett scheduled for tonight has been postponed until tomorrow. Hours after the attack, another explosion was heard in Kabul. Biden is expected to address events tonight.

One blast occurred at one of the entrance gates to Kabul airport – known as the “Avi” gate. Eyewitnesses described it as a “big explosion”. A second explosion occurred at the “Baron” hotel near the airport. The hotel is a collection point for those who have been granted permission to enter the airport.

According to a preliminary assessment by British intelligence, a first explosion occurred at a hotel when a suicide bomber blew himself up – and a shootout immediately developed on the spot. Then, the second explosion occurred at the airport gate. It was a larger explosion, and British intelligence said it could not be ruled out that it was a car bomb. The American soldiers were injured in the second explosion that occurred.

Pentagon spokesman John Kirby confirmed the details of the incident, adding that shots were also heard at the scene after the blast. In another statement, Kirby wrote: “We can confirm that the explosion at my father’s gate was part of a combined attack that caused several American and local casualties. We can also confirm that at least one more explosion occurred at or near the Baron Hotel, not far from my father’s gate.“

B.BBC The bomber struck shortly after noon in front of a U.S. military base. B.Sky News The blast was reportedly taking place in a canal outside the airport, where thousands were waiting in hopes of getting a flight to rescue them from Afghanistan. The French president told AFP that there are buses with French and other civilians, including Afghans, at the airport gates. He added that “it is not certain that we will be able to rescue everyone.“

The attacks hit the Afghan capital just hours after Western intelligence agencies warned of an imminent terrorist threat. A local journalist in Kabul even reported that in the Taliban we had informed the Americans of a possible ISIS attack at the airport. According to the report, the Taliban spokesman said: The Taliban has warned U.S. troops against terrorist organizations such as ISIS, the statement said.

The combined attack in Afghanistan comes days before the US is expected to complete its withdrawal from the country. Since the Taliban took control of the country last week, President Biden has come under heavy criticism – and events have also led to the postponement of his planned meeting with Prime Minister Naftali Bennett. A White House official said the meeting would take place tomorrow – and Bennett is expected to remain in the U.S. this weekend as he will not be able to return until Shabbat.