Fixed hotel train ride over the plains of the savannah 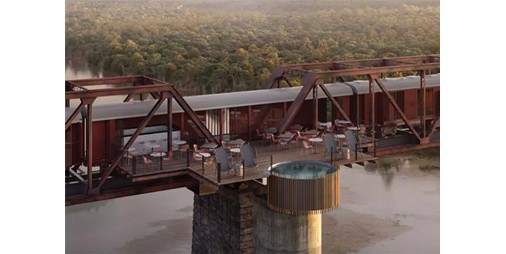 Inside Kruger Park, a huge nature reserve in South Africa, visitors can see from their bridge train cars a group of baboons, a hippopotamus moving below and a tiger roaming alone in search of a devouring antelope.

This sanctuary, where visitors get off the train that has been converted into a luxury hotel overlooking the plains of the savannah, is a kingdom for wild animals.

An area of ​​the train station platform has been allocated for the construction of a small circular swimming pool, around which guests gather at four in the afternoon to sip tea in the British style in the light of a gentle breeze dominating the atmosphere of the end of the southern summer.

When a strange sound is interrupted by the chirping of birds, a waiter explains that it belongs to a hippopotamus. Guests bend over the wall to see the Sabi River.

Elegant-looking merchant Chichi Modu, 36, is spending three days at the hotel with her boyfriend to celebrate her birthday. She confirms that she loved every detail of the place.

Minutes later, the group leaves in open wagons to watch giraffes, zebras and elephants closely in their natural habitat as they chew grass, play in the water and fight in an all-out brawl.

The bridge in the middle of this beautiful scene was deserted for decades, until the National Park tender in 201 won a hotel project, which consisted of establishing a stationary train on its tracks, allowing a view from the top of the reserve,

In the 1920s, the Kruger Park was only accessible by this railway, and since 1979 no trains have passed it, and it has been neglected.

– Monkeys are players – “We went to the site where he keeps old railcars looking for abandoned booths to qualify them and give customers a ‘journey through time’,” says manager Gavin Ferreira.

In total, the hotel has 24 cabins numbered 25 because the hotel’s mythological account states that cabin 13 does not exist.

Each cabin contains only one room with a large bed with fresh sheets and large pillows, and two large windows above the bathtub and sink overlooking the river for the customer to watch the animals brushing their teeth and wearing a silk bathrobe.