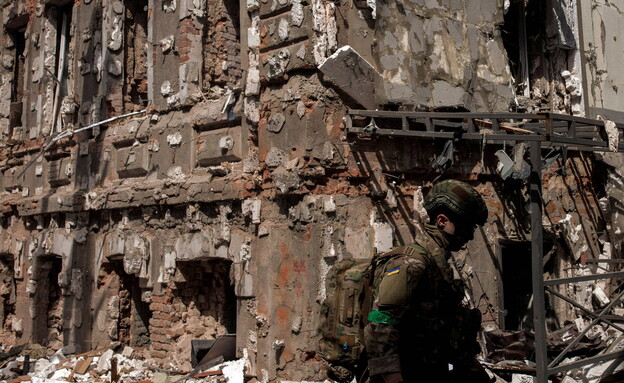 “Russia is setting up a concentration camp in Kharkiv Oblast,” Yudmila Denisova, Ukraine’s human rights commissioner, told reporters on Monday. According to her, the Russian forces in Vukhansk, near Kharkov, collect materials and equipment from a factory near the town – and use it to set up a concentration camp for the local population, where they torture people and force them to cooperate with them, she said. In addition, the Russians set up a similar camp in the city of Izum, in an attempt to oblige the citizens there to help them.The statement was made in the wake of last night’s visit by US Secretary of State and Secretary of Defense Anthony Blinken and Lloyd Austin to Ukraine and their meeting with President Zlansky. At the end of the visit, which ended in a security slump until the end, the two announced additional assistance to Ukraine amounting to hundreds of millions of dollars, along with the announcement of the return of the US Embassy to the Ukrainian capital Kyiv.

Minister Austin referred to the additional US security assistance, a few days after the previous $ 800 million arms shipment, and said that the US is interested in bringing about “the weakening of Russia”. This is a relatively unusual statement on the part of a senior US official at such a level, who explicitly refers to the desire to harm Russia. “We want to see Russia weaken to a level where it can no longer do what it did to Ukraine,” he said. He added that Washington wants to ensure that Russia does not have the capacity to renew its capabilities that were badly damaged in the war. The amount of US aid to Ukraine has so far reached more than $ 3.7 billion.

In the morning, Russia announced that it intends to keep its weapons in the vicinity of Mariupol and allow, for the first time in a long time, humanitarian evacuation from the besieged steel plant “Asobestel”, where it is estimated that there are between hundreds and thousands of civilians. At the same time, Moscow has announced that it intends to discuss with the UN Secretary-General Antonio Guterres the situation in the city. Shortly afterwards, hopes of improving the fate of the besieged faded when the Deputy Prime Minister of Ukraine announced that even today the parties had failed to reach agreements regarding the creation of a humanitarian corridor from the city.

Russian President Vladimir Putin today referred to the fighting and said that “the West has failed in its attempt to divide Russia.” In addition, Putin accused Western countries of helping Ukraine organize a “program to eliminate Russian journalists” who support the Putin regime. According to him, the Ukrainians intended, through CIA intelligence, to assassinate the leading Russian journalist Vladimir Soloviev.

Soloviev is considered one of the most senior commentators in Russia – he broadcasts current affairs programs on radio and television, and even owns his own production company. He is one of the most outspoken pro-Putin commentators, and tends to stick to the Kremlin’s message page. Among other things, he “predicted” that Russia would use nuclear weapons to protect its borders and even compared the sanctions on Russia to the Holocaust of European Jews. Soloviev himself has been sanctioned in several European countries, including the confiscation of property in Italy.

The media @segodnya_online Reports:
This is what the (confiscated) Italian villa of the Russian commentator Vladimir Soloviev looks like pic.twitter.com/qutwSIOL2f

Meanwhile, Ukrainian President Volodymyr Zalansky this morning congratulated French President Emanuel Macron on his victory in yesterday’s presidential election. Macron is considered one of the leading figures among Western countries in the line for Ukraine and against Russia, and on the eve of the election there was great fear that if Le Pen won she would severely damage Western efforts against Russia. Despite this, Putin himself also spoke with Macron and congratulated him on his victory.