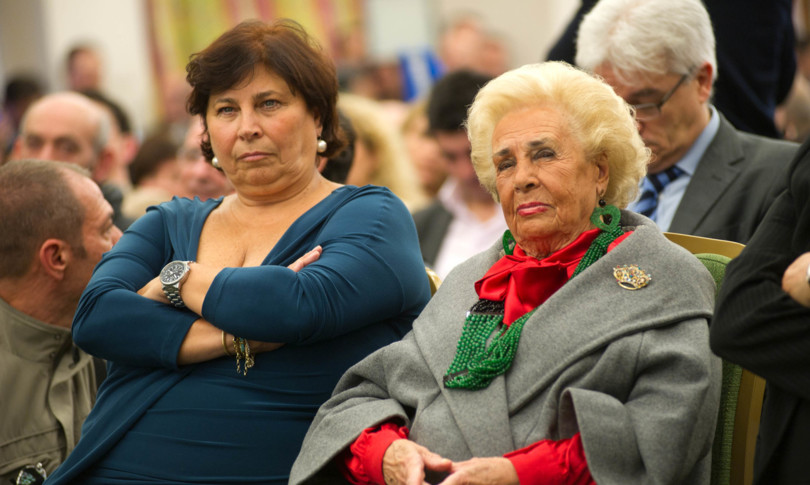 Assunta Almirante died this morning in her home in Rome. He was a hundred years old. The wife of the leader of the Italian Social Movement was born in Catanzaro.

After her first marriage to the Marquis Federico de ‘Medici, she married Almirante in 1969. In 1987 she sponsored the election of Gianfranco Fini as party secretary.

Criticism of the 1995 Fiuggi breakthrough and the creation of the National Alliance, in 2007 he participated in the constituent assembly of La Destra, the party founded by Francesco Storace and Teodoro Buontempo. Historical memory of the Italian right, he has always participated in events and animated, with his daughter Giuliana de ‘Medici, the Giorgio Almirante foundation.

“Donna Assunta marked an era of Italian life. Generous, generous with advice, sincere, tireless guardian of the memory of Giorgio Almirante, she has represented over time a point of reference for many. Her affection has been a privilege for many of us. I remember it with affection and emotion “said the senator of Forza Italia Maurizio Gasparri.

Assunta Almirante joined her husband Giorgio. An extraordinary, straightforward, intelligent woman. Pillar of the historical memory of the Italian right.
On my behalf and on behalf of FdI, I express my condolences, respect and gratitude for what he has represented for all of us.
Farewell, Donna Assunta pic.twitter.com/fzxkS9qMNd

“A few hours ago Assunta Almirante joined her husband Giorgio. An extraordinary, sincere, intelligent woman – the president of the Brothers of Italy Giorgia Meloni wrote on Facebook – a pillar of the historical memory of the Italian right. In my name and in the name of the Brothers of Italy, I express my deepest condolences for this disappearance, together with respect and gratitude for what Donna Assunta has represented for all of us. Goodbye, Donna Assunta “.

Have a good trip and a prayer for woman Assunta Almirante, a hundred years lived intensely.https: //t.co/le8r4hoOsn

“Have a good trip and a prayer for woman Assunta Almirante, a hundred years lived intensely”. So the Northern League secretary Matteo Salvini, on Twitter.

“It’s a huge pain. I had a very strong relationship with her.” Francesco Storace says so, commenting on the disappearance of Assunta Almirante.

“It was she who made sure that Almirante’s memory was not lost”, adds Storace, who on July 15 had celebrated the hundred years of Donna Assunta in “Il Tempo” by writing: “One hundred years madame, completed yesterday and with the severe and gentle grace gained in a life spent with great style”.

And again: “It’s nice to tell about her, and it could be for a thousand episodes. Present at the national congress of La Destra in November 2008, at the time she spent all her strength trying to unite, since then and then again for the policies of 2013, those worlds so far away but with the same thought. A meeting for a common journey between the writer and Giorgia Meloni wrecked and not the fault, let’s face it, of the leader of the Brothers of Italy. ? No, a hundred right … ‘, she said disconsolately with an effectiveness worthy of the best editorial “.

Assunta Almirante “continued to be herself until the end of her days: a strong woman of character, sometimes not very diplomatic but always convinced of her own ideas. In short, a free woman, a right-wing woman. ”The former leader of An Gianfranco Fini says so.

“Thirty-five years separate the death of Assunta Almirante from that of Giorgio Almirante – adds the former Speaker of the Chamber – an enormous period of time in which everything has changed in the identity and political action of the right. Yet today the disappearance of Donna Assunta brings together ideally, in the emotion of memory, all those who have been enrolled in the Social Movement of Giorgio Almirante “.

“The cultural turning point of Fiuggi and the painful divisions of the following years did not prevent the condolences on the right for the death of Assunta Almirante from being unanimous and sincere, sometimes different accents and tones but united by the respect and participation in the pain of the family” , continues Fini.

“Those who knew the right of the seventies and eighties are not surprised because they know how strong the sense of belonging to a” community “was rather than to a party – continues Fini – but it would be wrong to minimize and reduce everything to an understandable nostalgia for her youthful years. It would be above all ungenerous towards Assunta because if today she is remembered with esteem by all the “missini of yesterday” it is not only due to the fact that she was Giorgio Almirante’s life partner “.

“If 35 years after her husband’s death she had not been forgotten, it was because she continued to be herself even many years after she became a widow. prefer the open and frontal controversy, when she considered it essential, to the silence of those who try to make a living. Assunta continued until the end of her days to be herself: a strong woman, of character, sometimes not very diplomatic but always convinced of her own ideas. In short, a free woman, a woman of the right “, concludes Fini.