between the air raid alarms and the return to normal life 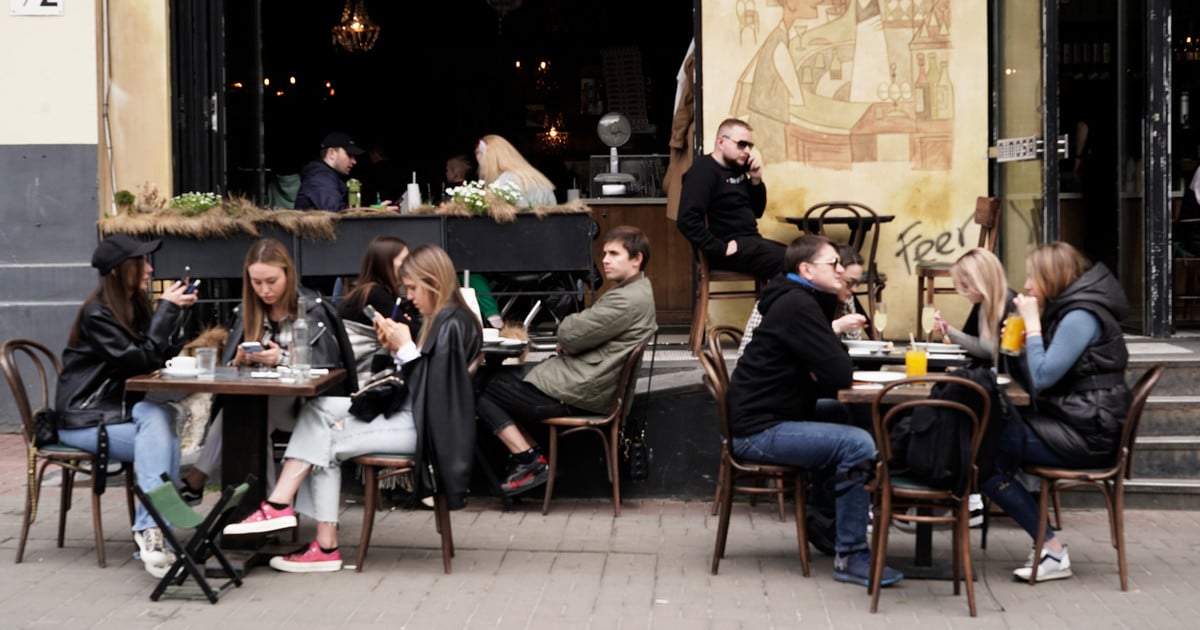 Russian missiles can be ejected from the Caspian Sea or from the Black Sea. They take about 30 minutes to impact, for example, in a city like Lviv. Similarly, a drone or bomber plane can take flight in Belarus and be immediately detected on its stealthy journey to its destination.

Radars are able to read these movements, to see them coming, but they cannot predict where the impacts will finally occur.

That is why the anti-aircraft alarms do not stop sounding every day in the Ukraine. They are heard indistinctly in all the cities of the country, although nothing happens afterwards.

They ring in doubt. They sound, despite the fact that many rockets are destroyed or directly fall on inert pieces of earth. sirens sound and at least in kyiv people don’t even flinch. The war is elsewhere.

The great capital lives spring days and begins to build a memory of what was the siege of the Russian troops suffered throughout the month of March.

Sandbags and checkpoints in the center of kyiv. Photo: Sergio Araujo / Envoy Clarín

It has ceased to be ghostly to become vigorous. The hipster They returned to their streets. Bars, cafes, department stores opened. People walk with the elegant bearing of the inhabitants of large European cities and the barricades – at least most of them – have been moved along the sides of the wide avenues.

Sandbags are piled up on the corners, but you no longer see parapet soldiers, but walkers taking photos in front of that defensive architecture that until just 20 days ago made kyiv an armored city.

Now the theaters renew billboards and there are musical events on the agenda: Iron Maiden is announced for May 29 and nothing suspends that visit for now.

Shops sell natural smoothie juices, skateboards are back in fashion, and many young soldiers use them to get around the historic center.

In Maidan the controls are lax and the gastronomy offer is diverse and varied. Nothing to do with March, when only one restaurant remained open almost secretly.

This Wednesday, on the other hand, there was a queue to take away food at the most famous take away in the city, founded 50 years ago: Kyivska Perepichka, the paradise of sausage wrapped in fried bread.

“A complete symbol,” explained the young historian Cristina, who spent the war in the city dedicated to rescuing abandoned dogs. “That there is a queue of people in this place, means that normality is returning, although not completely because the military state continues and the curfews continue,” she commented.

Alex was sitting in his brewery and also agreed to talk with Clarion. He was drinking a beer of his vintage, black and creamy. Of course, she invited, but simultaneously he confessed that nothing was the same anymore.

“The war did not end. It is not the same now to receive people in my place, have a beer with friends, enjoy the moment. We cannot really enjoy the present because very close by, our relatives are suffering destruction,” explained the 32-year-old.

He has relatives in Mariupol, the city razed to the ground and taken over by Russia. “They managed to get out to Italy and they are safe there. But they lost everything, they lost their house, their house blew up,” he explained.

Alex charted in his own way what is happening in kyiv and perhaps also in other cities of western Ukraine.

There are two Ukraines: one that moves to overcome the war, to stay out of it, and another that lives the war starkly. The first seems to want to embrace the world, to cling to a definitive and western rhythm of life, she is more vigorous, less peasant and economically prosperous.

The second is overwhelmed: it counts deaths without pause, witnesses the collapse of its infrastructure and contemplates the tide of displaced people fleeing to avoid the worst. The second, it is already known, is the eastern Ukraine for which Russia has decided to fight on all possible fronts. It is the lit fuse that is consumed in Europe’s powder keg.

kyiv reads from a distance the war reports that come from the South Eastern front. This Wednesday the Russians bombed the Severodonestk hospital. Most of the patients and staff were able to be evacuated in time. A woman died. But the destruction of the building was total.

In that same city, according to the Ukrainian army, a priest passed information to the Russians about the deployment of local troops.

On the phone of the cleric of the Ukrainian Orthodox Church of the Moscow Patriarchate, police officers found correspondence with representatives of pro-Russian armed groups, in which this citizen provided information about the number, location and armament of the Armed Forces of Ukraine .

The advance of Russian forces in Ukraine, this Wednesday. /AFP

A local was killed during a shelling of Pryvillya. The Russian missile fell in the courtyard of a house where the 68-year-old man was at the time. Earlier, the Russians fired on one of the schools in Lysychansk, in the basement of which 23 people, including children, were hiding. Fortunately, no casualties.

Rescuers recorded the destruction of seven houses in the Lugansk region. Almost the entire territory of the region suffered from the bombardments of April 26.

Nine Russian attacks were repelled on the front line of the Lugansk and Donetsk regions, areas where, despite the Russian advance, the Ukrainians are resisting.

“Anonymous” made its cyberspace contribution: it gained access to 229 thousand emails and 630 thousand files of the “Social Commercial Bank” of St. Petersburg, one of the 100 largest Russian banks in terms of net assets.

In Kherson, practically taken over by the invading army, there are attempts to bribe the population, but citizens take to the streets to say that they are Ukrainians and do not accept the intervention of the Kremlin.

In Mariupol everything is dramatic. The Azovstal steel mill is still the dominant news and the UN is preparing a humanitarian mission to evacuate the people trapped there. The attacks and the fire around him do not stop.

Russia in parallel tries to isolate the Odessa region. On Wednesday morning the Dniester estuary bridge was attacked again. Missiles have become frequent in the coastal city, close to Moldova. That seems to be the new geographical scenario that Vladimir Putin wants to conquer.

Little is said about all this in kyiv. A new time, back to life and excessive consumption, has begun. As if the desire for normality killed any kind of latent threat.