How did the character of Anne Frank become the international ambassador of the Holocaust? 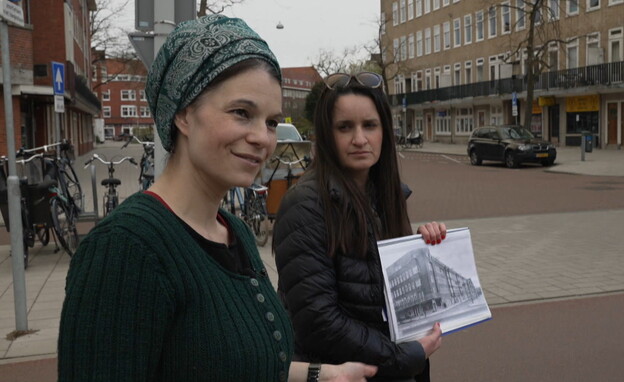 There are many places where one can start the story of Anne Frank. July Malka, a guide who leads tours of Amsterdam, chose to start it near the square and the buildings, which were Frank’s childhood landscapes. At this point, one might go back to a time when she was not yet the “Anne Frank” symbol, but a flesh-and-blood girl.Hannah Gossler, “Henley,” knew Anna then, shortly after the Frank family fled Germany following Hitler’s rise to power. Anna was 4 years old and they both became best friends. Hannah’s Anna, as she remembers her, is a sharp, smart girl who loved to talk and write: “If you take a girl at that age and shut her off from friends, animals, flowers, everything, sometimes the talent that maybe 20 years later it would turn out, is already revealed,” Gossler explained.

Beginning in the 1970s, Hatiam Jimnick is the owner and manager of the corner bookstore near Marvadplein Square, the bookstore where an important, perhaps most important, chapter in Anne Frank’s story begins. “In this store, exactly 80 years ago, in the summer of 1942, Otto Frank buys Anna the diary notebook. She calls her ‘Kitty’ and hopes she can be a loyal friend to her,” explains July.

In the same place where it stood then, Anne Frank’s books are now sold in dozens of different languages ​​and versions. Hatiam has become a humble one-man enterprise for the preservation of its memory and heritage. He is so invested in the story of Anne Frank, that he himself was pressured when the Holocaust research organization asked him to find more diaries written, more “Anne”.

“I found hundreds of diaries published in the Dutch language and I had a table full of them, of different people, all of them children,” says Hatiam. Hundreds of boys and girls writing diaries during the Holocaust in the Netherlands alone. Children who hid like her, children who perished like her, or those who survived. There are hundreds of diaries published, hundreds of “anas”, and there is still only one Anne Frank, only one diary – the diary. “Anna is the ambassador of the Holocaust, if I may say so,” he said. The Anne Frank Diary has since sold 35 million copies. It has been translated into more than 70 languages, read worldwide and is one of the best-selling books in history.

In the back house on Prinsenracht Street they lived for two years and a month. Only 4 local Dutch knew and assisted them with food and equipment. 8 people hiding in a small, enclosed space – 4 members of the Frank family, Fritz Pepper, a family member, a 50-year-old man who shared the small room with Anna, and members of the Van Peles family – both parents and son Peter, who became Anna’s object of love. She wrote about them in detail.

“The story is a story of a teenage girl who hides and deals with the difficulties around her, with the relationships within the family. There is not too much Judaism. It speaks to a much wider audience,” explained Professor Dan Machman, head of the International Institute for Holocaust Studies at Yad Vashem. “One can easily identify with her without knowing exactly all sorts of things related to a specific Jewish life,” he said. Anna’s diary ended on August 1, 1944. Three days later, Nazi soldiers broke into hiding and arrested the eight Jews. Anna and her sister were sent to Bergen-Belsen, where they died of typhus. The father, Otto, is the only one who survived and at the end of the war returned to the house alone.

The enterprise of Otto Frank’s life

After the Nazis together with the Dutch police went into hiding and arrested the family members and sent them to the extermination camps, Mip Heiss, one of the women who helped the family hide, hurriedly collected all the documents she found, including the diary. She kept and did not read them and really wanted to bring them back to Anna. When it became clear that Anna had not survived the Holocaust, she passed the documents and diary to her father, Otto Frank.

The importance of Otto Frank in promoting Anna’s work and heritage cannot be overstated. He collected her writings, concentrated them and even managed to recover an entire year from the diary she had lost. In the first version he even censored passages in which Anna engaged in sexuality or wrote negative texts about family members. In 1947, “The Back House – Diary Entries” was published. The book was a bit of a success, but almost forgotten. But Otto was not willing to let that happen. He pushed and acted to bring the story to a larger audience and succeeded along with a Pulitzer Prize-winning play on Broadway and a Hollywood film that exposed Anna to the world. From there the diary became a “diary” and Anne Frank became one of the most recognizable figures in the world.

The voices that have not yet been heard

In recent years, the Jewish community in the Netherlands has been trying to divert its focus from it a bit, to undermine the icon somewhat. “This is a pretty unusual story,” says Emil Schreiber, director of the Jewish Museum in Amsterdam. The enormous dimensions of the Anne Frank icon. ”

A combination of many circumstances led to Anne Frank’s diary of the status it had reached, a combination of quite a few people and bodies involved. But at the end of the driving force of the story is one girl, an intelligent and beautiful girl, writing with grace, a girl who dreamed of becoming a successful writer and did not get to see her dream come true.