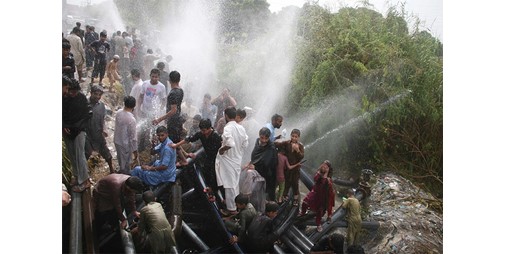 Pakistani authorities have put rescue services on high alert, after warnings of severe floods and glacier flooding, in the northern regions of the country, with temperatures rising to dangerously high levels.

“The regional government has urged the Disaster Management Authority and the areas most at risk (to take precautionary measures),” Shahzad Shijri, an environmental protection official in Gilgit-Baltistan, told dpa on Saturday.

Glaciers in the northern mountain ranges of Pakistan – the Hindu Kush, the Himalayas and the Karakorum – are melting rapidly due to rising temperatures, leading to the formation of more than three thousand glacial lakes in Gilgit-Baltistan and Khyber-Pakhtunkhwa provinces.

Shijri added that glacial lake floods are sudden events and are very rarely dealt with, resulting in loss of life, property and livelihoods in remote areas.

According to one estimate, more than 7.1 million people are vulnerable to glacier floods.

Aslam added that the city of “Dado” in the southern province of Sindh experienced “the warmest temperature on Earth in April” during what should have been the spring season.

It is reported that more than 2,000 people died in 2015 in Karachi when a heat wave hit the city, during the month of Ramadan.