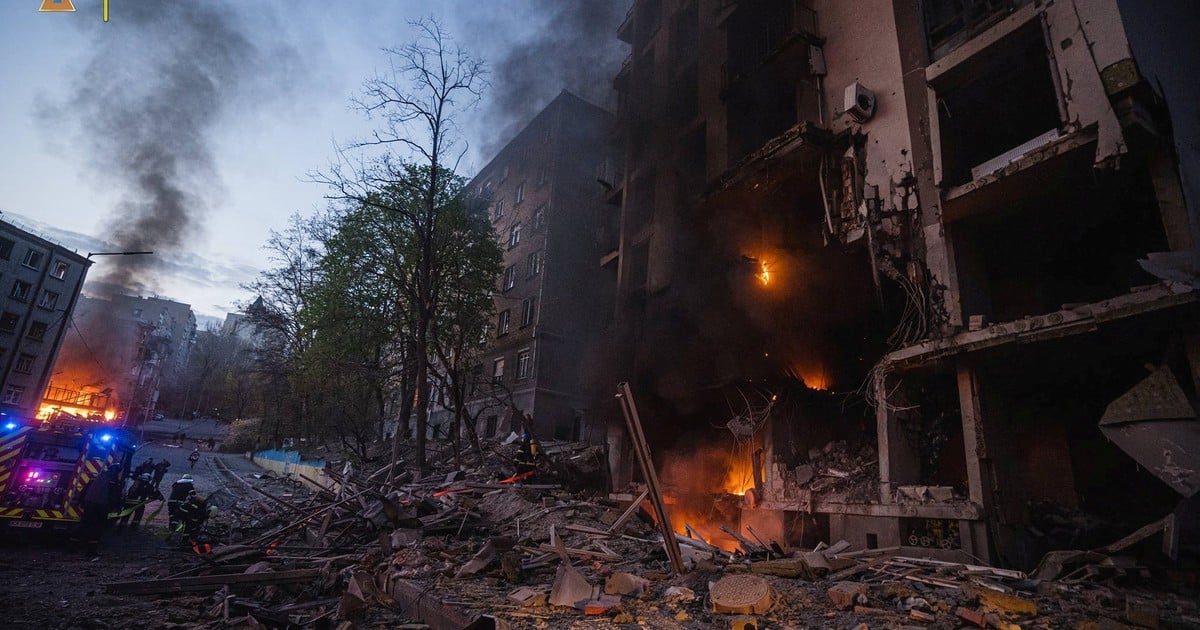 The war wins in scale and diplomacy remains in a residual gesture, of good will and little else, carried out this week by the Secretary General of the United Nations, António Guterres.

Shortly after he met with Ukrainian President Volodymyr Zelensky in kyiv, Russia attacked the capital with missiles. At least five hit the Artem arms factory and another destroyed the first floors of an apartment block.

It had been weeks since kyiv had avoided the worst of the war, but Thursday’s attack, as well as a setback to Guterres’ mediating efforts, demonstrates the ability of Russian artillery and missiles to reach anywhere in Ukraine.

Hitting kyiv when Guterres was negotiating the opening of a humanitarian corridor in Mariupol is a provocation and a clear message that Moscow does not believe this is the time for diplomacy.

The head of the UN, Antonio Guterres, met on Thursday in kyiv with President Volodimir Zelensky. Photo: AP

Ukraine and its allies are also not here to negotiate anything. The defense of the territory is paramount, as is the principle that Russia will not be able to gain any ground with this aggression.

The shipment of weapons to the front is constant. The roads that lead to the Sloviansk and Kramatorsk area were still full of military convoys, troops traveling by bus and private vehicles on Friday to reinforce defensive lines that are giving up ground but selling their skin dearly.

The war escalates day by day. Although the Russian army bombards the coastline, especially Odessa, this is an anachronistic ground war, reminiscent of World War II and every other war before it.

The Donbas is disputed with artillery and tanks, as has always been done. There are few planes and little or no cyber technology.

The heavy weapons that arrive in Ukraine are low-tech, similar to those used by the Russian army. The high-precision missiles that fell on kyiv on Thursday are the exception.

The Pentagon estimates that more than 1,900 rockets have already been launched. None of them has served, however, for Russia to score a great victory, and that has already been two weeks since the start of the offensive in Donbas.

Smoke and fire after a Russian bombardment in kyiv, on Friday, April 29. Photo: REUTERS

The UN tries to mediate

Guterres had options to find a path to peace, starting with humanitarian corridors, measures that, in addition to saving the population, can generate trust between the belligerents.

Guterres started the week in Istanbul, then went to Moscow and finished it badly in Kyiv. Zelensky, from the outset, did not like that he left it for last, while President Vladimir Putin has long repeated to any international dignitary who visits him that the use of force is still necessary.

The war in Ukraine, now beyond its geographical limits, with some very serious economic consequences for Europepits, above all, Russia against the United States.

Hence the importance of the UN, the only international body in which Russia and the US sit on an equal footing.

The North American president, Joe Biden, does not think that it is the moment to speak either.

He has just asked Congress for 33,000 million dollars for Ukraine, an exorbitant sum, which will keep the war machine well oiled for months. It seems clear that analysts in Washington clearly see that peace is a long way off.

NATO is preparing for this confrontation, passive at the moment, but which could turn into an open war at any moment.

Tens of thousands of Atlantic Alliance soldiers train for it. Britain announced on Friday that it would send 8,000 more to join them.

The Ukrainian population, meanwhile, pays the price for the militarism that has taken over Moscow and allied capitals.

The trickle of dead is constant. kyiv has lost a hundred citizens, the latest being Vira Girich, a journalist for Radio Free Europe and Radio Liberty. She was at home when she was killed by a Russian missile on Thursday.

Kharkiv and Odessa suffer from daily bombardment, but so do the small towns in the Donbas.

Many of its inhabitants have chosen to flee, but hundreds of thousands continue to live there and in the southern provinces, which are also suffering from the pounding of Russian artillery.

The cannons silence the voice of diplomats and will continue to do so until the defeat of one side or the realization that no one can win.

The author is sent from La Vanguardia to Ukraine