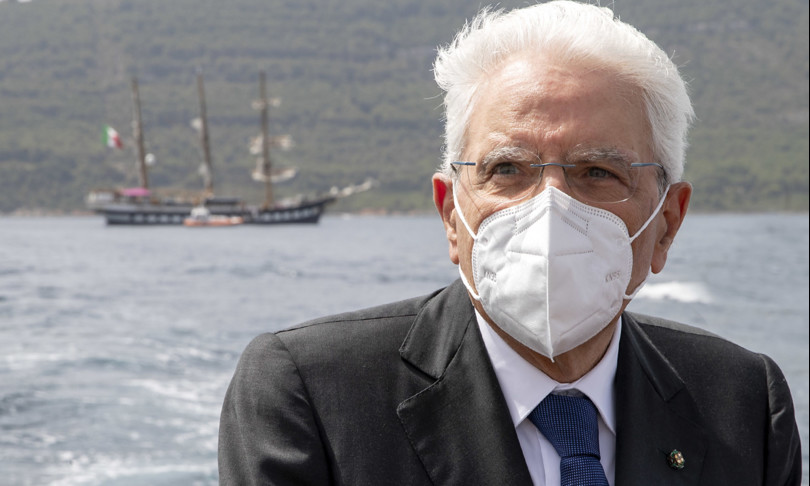 “In these days one thing appears disconcerting and is recorded in the statements of politicians here and there in Europe. They express great solidarity with the Afghans who lose their freedom and rights, but that they remain there, they do not come here because we would not welcome them ‘. This does not live up to the values ​​of the EU “. This was underlined by the President of the Republic Sergio Mattarella answering a question about migrants during the 40th seminar for European federalist formation on the occasion of the 80th anniversary of the Ventotene Manifesto.

“I am surprised by the position of some politicians in the European Union, who are rigorous in demanding respect for the human rights of distant countries but distracted with respect to the conditions of migrants. And not of any type of migrants but of those fleeing persecution or hunger “, he added, explaining that” It is essential to immediately equip the European Union with instruments of foreign policy and common defense “.

“I am well aware that many countries are held back by contingent electoral concerns but in this way we end up entrusting the management of the phenomenon to smugglers and human traffickers”. This is the alarm raised by Sergio Mattarella.

“It is as if we are relinquishing the responsibility of explaining to public opinion that it is not by ignoring the phenomenon that it is governed. The phenomenon exists, it is not by ignoring it that it is canceled or contrasted, but a sense of responsibility is needed – continued the Head of State – it must be explained that not in a century but in twenty-thirty years the demographic difference will be such as to give life to a decomposed migratory phenomenon that it will not be limited to the border countries but will reach all over the continent as far as the Scandinavian countries“. Therefore for Mattarella also the European Union should govern the migratory phenomenon” with rules of legal and controlled access “.

The President underlined how “in Europe there is talk of the external borders of the Union, an agency has also been set up, Frontex, but the issue has never become a truly community matter. We have managed to make shared resilience policies against Covid, the centralized distribution of vaccines which must be acknowledged to the Commission, but it is singular that we have succeeded for the covid which is not a Community matter and the same has not been done for migrations. This lacuna does not live up to the aspirations, the role, the responsibility of the EU “.

The importance of Ventotene

For the President, the Ventotene Manifesto, with its lesson of freedom, democracy, European collaboration, is still “relevant”. This is because “every great change is preceded by vigils and periods of resistance, and this is what happened here in Ventotene. Fascism had sent several people here to force them not to think or at least to prevent them from sowing dangerous ideas of freedom. Spinelli, Rossi, Colorni in Ventotene, in Pertini and Terracini prison. The loo was an exhortation in defense of democracy against the drifts that endanger freedom. They are teachings and lessons without expiry and without time, expressed with confidence in freedom, in the course of history and with the courage of positions of absolute avant-garde “.

“These are lessons – continued the Head of State – which also speak to us with great relevance in this period of demanding and difficult global challenges and many realities of destruction. That solicitation to defend freedom and democracy is still valid today, it is fully current and it was accompanied, then and now, with the exhortation to travel faster along the path of European integration as a safeguard for the values ​​of rights and democracy “.

“I am firmly convinced of the importance of NATO, a fundamental pillar for Italy and Europe. But the transatlantic relationship requires that the EU have greater foreign policy and defense capabilities”, explained Mattarella in his speech.

“This perspective is also important for the United States – underlined the Head of State – because in a world where international protagonists are increasingly larger, I believe the protagonist closest to the US should have a greater operational capacity: it is in the interest of the EU but also of the USA. It is therefore necessary for the Union to equip itself with effective, real and concrete foreign and defense policy instruments “.

For Mattarella, the instruments put in place by the European Union against Covid “are not a one-off but have changed the concept of community support and are now irreversible”

“The EU has changed a lot after Covid, we have encountered a dramatic crisis, which we are still facing even if we hope to overcome it and defeat it soon. Monnet said that Europe would be made in crises through the various solutions to overcome them”.

And in this crisis, the Head of State pointed out, “the EU has had a capacity for intervention of extraordinary speed and intensity, of clarity, timeliness and courage which must be acknowledged”.

The commission and the member states have put in place measures to counter the consequences not only of health but also of economic consequences of Covid. “These are tools of great importance, among them the Next generation is a turning point in conception, they are not one-off and reversible tools. These tools will remain, I am convinced”, he concluded.