The biggest beneficiaries of the war: Saudi Arabia and Qatar are cutting a coupon 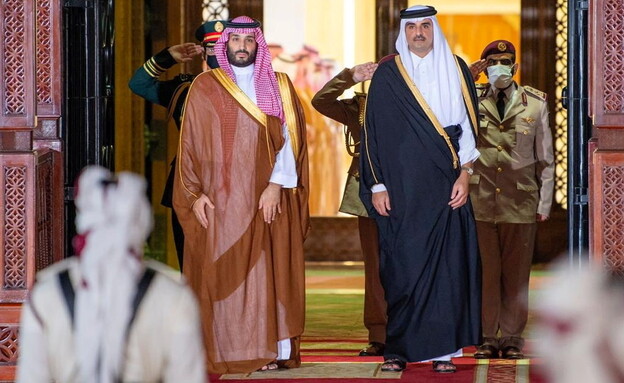 It has been more than two months since Russia invaded Ukraine, and a difficult and bloody war has been going on there ever since. The eyes of the whole world are married for long days to the war, which beyond the severe damage to the lives of the citizens of Ukraine, also carries a heavy price from the vast majority of countries. Due to the war, the prices of oil, gas, food, as well as the prices of many other goods, which are routinely exported from Russia and Ukraine in large quantities, have recently soared. While the whole world is already feeling the rise in prices, alongside real threats of a major food crisis expected in many countries – Saudi Arabia and Qatar are actually enjoying every moment, and are arguably the biggest economic gainers of the war in Ukraine.In recent days, the Saudi Arabian government has announced that its economy has been growing at the fastest pace in more than a decade in the last quarter. While most countries in the world are feeling the sharp rise in oil prices due to the war – Saudi Arabia, one of the largest oil exporters in the world, recorded an increase of almost 10% in GDP, the highest figure since 2011.

The surge in oil prices, a 38% increase in 2022 alone, represents a more than 50% increase in price compared to 2021. In the coming year, Saudi Arabia’s economy is expected to grow by another 7.6%, reaching for the first time ever more than $ 1 trillion, according to International Monetary Fund. Despite rising oil prices, Saudi Arabia along with the rest of the OPEC (Organization of the Petroleum Exporting Countries), and Russia among them, have recently increased production, pumping 10.3 million barrels per day in March, the largest amount since April 2020.

Preliminary estimates, from the first days of the war in Ukraine, have determined that Saudi Arabia’s revenues from oil sales are expected to quadruple compared to last year. It is now estimated in the kingdom that this year, for the first time since 2013, will pass a positive budget – with an excess ratio between income and expenditure.

Saudi Arabia is not the only one benefiting from the rise in energy prices following the war. The country that is perhaps benefiting from the crisis more than any other is Qatar – which under the auspices of the war is expected to become the largest natural gas exporter in the world within a few years. Many countries on the European continent, which for the most part rely on Russian gas, have already sent high-ranking representatives to Doha with a sharp and clear message: need your gas as soon as possible and in as large a quantity as possible. The trend gained momentum last week, with the decision of Russian gas giant Gazprom to halt gas supplies to Poland and Bulgaria.

Already, after the first quarter of the year, Qatar’s revenues from oil and gas exports crossed $ 100 billion, for the first time since 2014. European thirst for natural gas from new sources comes for well-timed locomotives, having invested a whopping $ 30 billion in upgrades in recent years Their gas economy, with the aim of increasing export quotas by more than 60% by 2027. If before the war there were many commentators who questioned Qatar’s ability to meet targets – the war boosted global demand – and Qatar was the first to benefit from it.

Qatar, a country with a population of about 3 million inhabitants, although only a few hundred thousand of them are considered real citizens, has the third largest natural gas reserves in the world. Even before the war broke out, the West recognized the great potential of Qatar as an important gas exporter, and in January Amir Qatar, Sheikh Tamim bin Khamed a-Thani, was honored by the White House with President Biden. The same Biden, who in his election campaign two years ago presented a green agenda that sought to encourage as much as possible the use of renewable energies – began even then to woo the polluting gas of the statements from the Gulf.

On the same visit to the White House, and while Saudi Arabia, another historic US ally led by Regent Muhammad bin Salman, received a cold shoulder from the US – Qatar received a special honor: a major non-NATO ally. The Qatari economy is expected in the coming year Grow by almost 5%, a record increase since 2015, and GDP is expected to return to a value of almost $ 80,000. In November and December it will host the World Cup, and will be the first Arab country to do so – thus marking a historic year, no less.

From isolated countries – to important allies

If it now seems that the condition of the locomotive is particularly good, one only has to go back a few years to remember that the situation was until recently completely different. In 2017, Saudi Arabia, the United Arab Emirates, Bahrain and Egypt imposed a widespread boycott on Qatar – due to its support for many terrorist elements, including Iran, the Houthi rebels in Yemen and the Hamas movement. More than 3 years later, during a successful diplomatic move by the Trump administration in the Middle East, those same countries agreed to lift the boycott and renew relations with Doha. Beyond that, in recent years Qatar has suffered from intense international criticism ahead of the World Cup – with many allegations of real violations of the workers’ rights that established the stadiums and its new infrastructure, as well as allegations (many of which have been proven correct) about the fact that it “bought” the right to host The World Cup through bribes to FIFA officials.

Despite all this, Qatar today is one of the most popular and geopolitical countries in the world economically and geopolitically. It is evident that its influence is present at almost every point in the region in particular and in the world in general, and it is expected that this trend will only deepen in the coming years.

Saudi Arabia has also recently experienced a renewed global renaissance. Since President Biden’s inauguration, Saudi Arabia’s status in Washington and around the world has declined dramatically amid protests by US President-elect Muhammad bin Salman and suspicions against him of human rights violations and his involvement in the 2018 assassination of Saudi journalist Jamal Khushkji. Now, too, since Russia’s invasion of Ukraine – it has become a sought-after factor in the global arena. Expressions of the trend can be found, for example, in a recent visit by British Prime Minister Boris Johnson to Riyadh in a request to increase oil production, and Ben Salman’s unwillingness to coordinate a telephone conversation with President Biden.

Against the backdrop of the dramatic rise in oil prices, Biden is trying to renew ties with Saudi Arabia and the Saudi Crown Prince. Biden, concerned about his position and the status of his party in the polls ahead of the midterm elections and the start of the presidential election campaign, is determined to bring down oil prices – a move that requires Saudi support. Riyadh is now happy to be the recycling side, very much enjoying the huge increase in profits, and it is not apparent that they will now accede to requests to increase productivity.

The war in Ukraine at once catapulted the status of the two important Gulf states – and brought about a real change in their attitude on the part of the Americans and the rest of the Western countries. Both Doha and Riyadh fully understand that the global crisis, perhaps the biggest in many years, is for them no less than an equality breaker – and it can be estimated that they will do as much as possible to maximize profits in any field they can. For example, only in recent weeks has the EU announced that citizens of Qatar and Kuwait (which also enjoys a huge increase in revenues from the sale of oil) will not be required to issue special entry visas ahead of time. At the same time, Saudi Arabia has been signaling in recent months about its growing wealth of options on the part of China.

The global crisis is worth a lot of money to Qataris and the Saudis, and in a world that one day strives to become independent of oil and gas, it has a particularly great significance. At the same time, money really is not the only thing that interests them – and first and foremost they face the need to upgrade their status and influence in the region and in the world, along with the greatest interest of ensuring the integrity and integrity of their regimes. The replica amounts that will be earned there in the current crisis – we will see well and soon in investments in Egypt, Pakistan, Turkey, Yemen and also here – in the Gaza Strip.