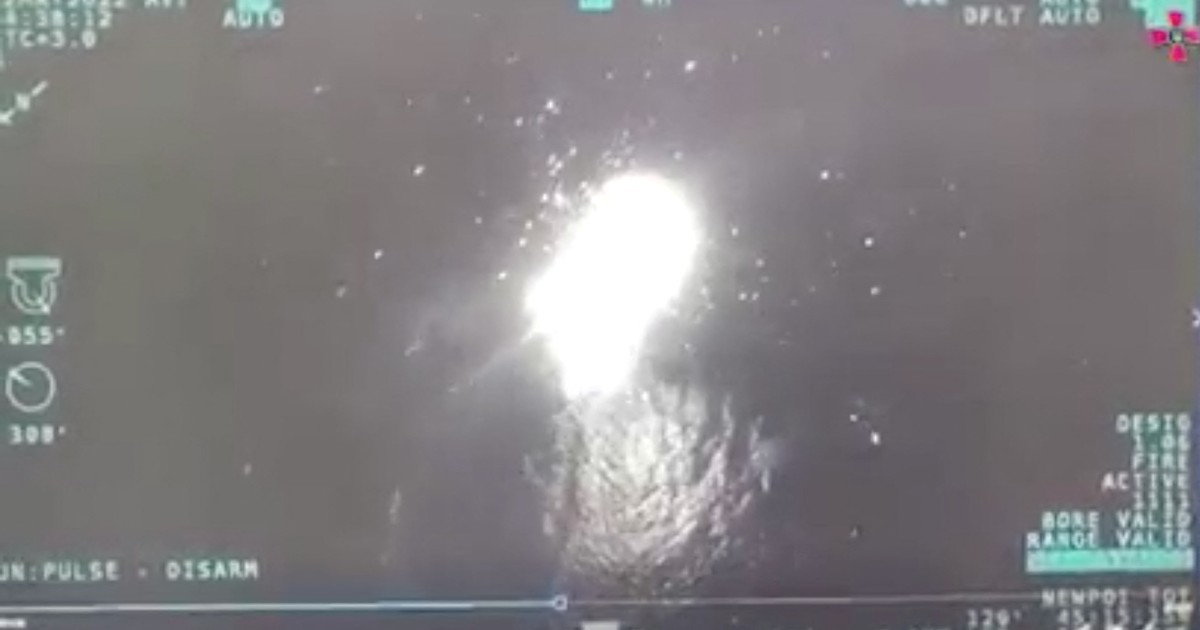 68 days after the start of the war between Russia and Ukraine, the Ukrainian Defense Ministry reported on Monday that his drones sank two Russian patrol boats who were sailing near the island of Serpents, in the Black Sea.

They did it with Bayraktars, some Turkish drones capable of carrying out this type of operation that are controlled remotely and used by the government of Volodimir Zelenski to defend his country from the Russian invasion.

“Two Russian Raptor ships were destroyed today at dawn near Snake Island,” Ukrainian authorities said in a statement that was released on social media.

Images of the sinking of the Russian ship. Photo Reuters

They also released black-and-white aerial images that show the explosion of one of the military vessels from above, and a video showing the exact moment of the sinking.

It lasts 17 seconds and records when the Ukrainian defense visualizes the target and shoots at one of the ships, causing a large ball of fire that expanded into the sky and the subsequent sinking of the ship.

In this regard, the commander of the country’s Armed Forces, Valeri Zaluzhni, noted: “The Bayraktars are working”confirmed in reference to the concrete action.

The sunken speedboats, known as “Raptors,” are patrol boats used by the Russians that can carry three crew members and 20 passengers.

According to the AFP agency, they are usually equipped with machine guns and used in operations reconnaissance or landing.

The sinking of the ships comes less than a month after Ukraine caused an explosion on the Moskva ship, a symbol of the powerful Russian Navy.

The first images of what would be the sinking of the Moskva, flagship of the Russian navy, appeared on Twitter in Black Sea waters. Photo: Twitter.

The episode with the flagship Russian cruiser

The Moskva, the pride of Putin’s Navy, exploded in the Black Sea in the early hours of April 14. Although at first she only learned that it had been badly damaged, only a few days later did the authorities confirm that the boat had finally sunk.

As reported from kyiv, the ship was hit by two Ukrainian-made anti-ship missiles. The governor of the Odessa region, Maxime Martchenko, told news agencies at the time that “Neptune missiles protecting the Black Sea caused significant damage to that Russian ship.”

The Moskva cruiser was the crown jewel of the Russian Navy. Built in 1979 at the Mikolayiv shipyards (today in Ukraine) and in use since 1983, its 186 meters in length, its maximum speed of 32 knots, its 12,500 tons and its 16 Vulkan anti-ship cruise missiles with a range of more than 600 kilometers they made him a mighty war machine.

At the beginning of the war the Moskva was entrusted to take the small Snake Island, where there were 13 Ukrainian soldiers.

The loss of this, in a scenario like the Black Sea in full control by the Russian fleet and against a country without a Navy worthy of the name, was a humiliation for Moscow. A symbolic victory for the Ukrainians.