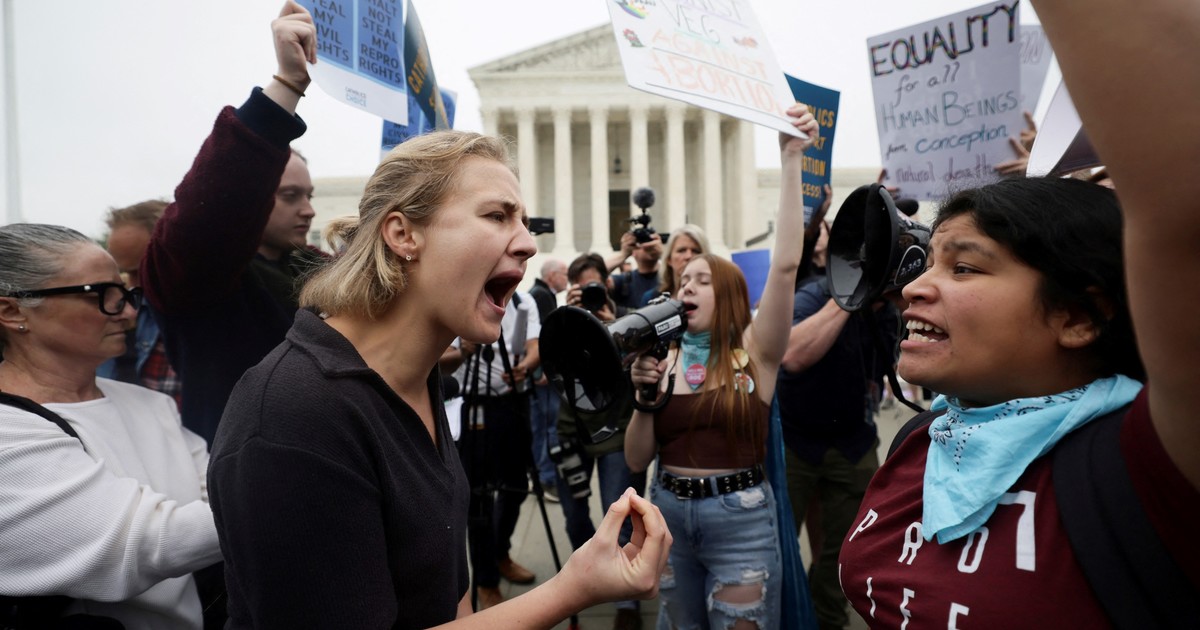 The unpublished leak on Monday night of a Supreme Court draft of the United States, indicating that the Court is preparing to repeal the right to abortionfell like a bomb in a divided country and with legislative elections in November.

The subject is extremely sensitive and explosive for citizens and many of them did not even wait for dawn in Washington and went out to protest or celebrate in front of the Court building.

Pro- and anti-abortion protesters face off in front of the Courthouse in Washington. Photo: Reuters

Biden made it clear that his government has struggled hard in favor of the fallo Roe VS Wade that legalizes abortion in the US And stressed that “if the Court overturns Roe, it will fall into the hands of elected officials at all levels of government in our country protect women’s right to choose.”

And he called in the November elections to elect senators and deputies in favor of the right to elect in order to pass legislation to codify the Roe ruling, which “I will _said_ sign into law.”

The draft, written by Judge Samuel Alito, is a document that circulated within the Court and as the opinion of the majority. It would be endorsed by 6 of the 9 members of the Court, conservative majority thanks to the 3 magistrates appointed by former President Donald Trump. It was disclosed on Monday night by Politico, in a scoop that caused a social and political earthquake.

A woman cries in front of the Court, in Washington. Photo: AFP

The fact that it was leaked –this is the first time something like this has happened in a court absolutely discreet—it is just a sample of how controversial this issue is and all the controversy it will bring until the Court announces its decision, which is expected to It will be at the end of June.

A repudiation of the ruling Roe VS Wade

The document is a total and uncompromising repudiation of Roe v. Wade, the 1973 ruling that guaranteed federal constitutional protections of abortion rights, and a subsequent 1992 decision – Planned Parenthood v. Casey – who largely held the right.

In principle, the case analyzed by the Court was linked to a Mississippi state law which sought to ban most abortions after the 15th week. But the Court would not only decide this case, but would advance to repeal the “Roe vs. Wade” since Alito said that this ruling “is terribly wrong from the beginning”, and calls for its repeal.

Although the draft could be changed until the final decision, the ruling would end half a century of federal constitutional protection of the right to abortion and would allow each state to decide whether to restrict or prohibit abortion.

Planned Parenthood, which operates abortion clinics across the country, said the draft opinion It is outrageous”, but warned that “it is not definitive.”

Meanwhile, anti-abortion activists viewed the draft with optimism. “You know the old saying: ‘It’s not over ’till it’s over.’ we are full of hope that someday soon those born in America will be a little safer,” said Cathy Nix, executive director of the San Antonio Coalition for Life.

According to experts, the annulment of Roe vs. Wade would lead almost immediately to stricter limits on access to abortion in southern and midwestern states, noting that about half of states are ready to impose immediately broad bans on abortion. Any state could still legally allow the procedure.

Roe vs. Wade guarantees termination of pregnancy until week 24, the generally accepted medical standard for fetus viability outside the womb.

In recent times, many states have reduced this period arguing that abortion is legal before the 15th week or even, such as Texas and Oklahoma, until the fetal heartbeat is heardwhich is at about 6 weeks, which makes the abortion almost impracticable.

Each state will impose the regime it wants​

These state decisions always fell into a legal battle that ascended to the Court. If Roe v. Wade is overturned, states will get the green light to impose the regime they want.

The Guttmacher Institute, a research group that advocates for abortion rights, has said it is “certain or likely” that 26 of the 50 states ban abortion if the ruling is annulled. However, some governors of traditionally more liberal and Democratic states, such as Pennsylvania and California, made it clear on Monday night that they will guarantee that abortion will be still legal in those territories.

The impact of the news was immediately seen on the street: as soon as the draft was published, hundreds of people went out to protest or celebrate on Monday night in front of the white marble building that houses the Supreme Court in Washington and the police had to intervene because there were struggles between the “pro-life” and “pro-choice” groups.

Amid a crowd chanting “my body, my decision,” Abby Korb, a 23-year-old student and parliamentary assistant, said she was “literally in shock”. For her, “outlawing abortions will not end them, it will simply make them more dangerous,” The Washington Post reported.

As soon as the draft was released, hundreds of people came out to protest or celebrate on Monday night. Photo: AP

On the opposite sidewalk was Claire Rowana 55-year-old mother of seven children, who was celebrating in advance the possible decision of the Court and said that she hopes that people “ask God for forgiveness” so that the United States can “cure itself”.

Roe vs Wade It is widely accepted by the population.. A Washington Post/ABC poll from late last year found that 60% of Americans wants the court hold the bug, while only 27% want it to be annulled.

The draft opinion threatens to give a turnaround for the legislative elections in November unpredictably.

House Speaker Nancy Pelosi and Senate Majority Leader Chuck Schumer took aim at conservatives on the Supreme Court, without naming them, who testified during their confirmation hearings that legal precedent was respected.

“They have lied to the Senate”​

“If the report is accurate, the Supreme Court is ready to inflict the greatest restriction of rights in the last fifty yearsnot just women but all Americans,” they warned in a statement.

“A number of these conservative judges, who are in no way accountable to the American people, they lied to the senate of the United States, have shredded the Constitution and defiled both the precedents and the reputation of the Supreme Court, all at the expense of tens of millions of women who could soon be stripped of their bodily autonomy and constitutional rights they have relied on for half a century.”

Some Democrats argued that overturning Roe vs. Wade would energize the party’s voter base and also to some independent voters who until now were less enthusiastic than Republicans about getting out the vote.

“It’s another reminder of how much Donald Trump’s victory in 2016 changed the trajectory of our country. Stopping his re-election became the biggest reason Democrats turned out to vote in 2020, and will have a similar impact in the midterms,” ​​said Richard Luchette, a Democratic strategist.

A former Senate Republican adviser was more skeptical to the New York Times that the Democrats benefit. “Does this motivate married suburban women to vote Democrat, against a backdrop of war in Europe, high gas prices, education problems and rampant illegal immigration? I don’t think so,” she said.

“This will also motivate the conservative base in an election where Trump is not on the ballot, even though the base is already highly motivated.”