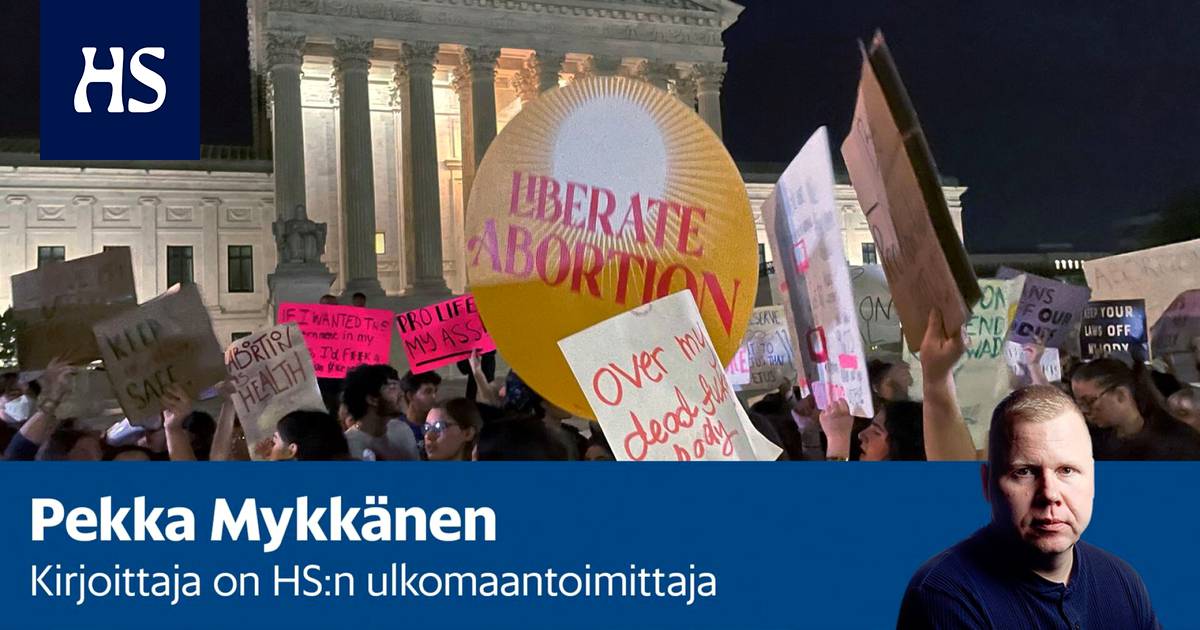 Violation of the right to abortion would electrify the congressional elections, call into question the impartiality of the Supreme Court and seal Donald Trump’s heroism in the heart of the Christian right, writes HS journalist Pekka Mykkänen.

In Ukraine the raging war was allowed to recede from the number one spot in the American media early Tuesday in Finnish time, when Published by Politico magazine news on its website that the U.S. Supreme Court is preparing to overturn abortion at the federal level.

The right to abortion has been fought fiercely in the United States for half a century, and the realization of the Supreme Court’s settlement proposal would mean a huge earthquake in this cultural war. The decision would electrify U.S. policy ahead of the November congressional election and could seriously test the credibility of the Supreme Court as an impartial interpreter of the Constitution.

The policy would also seal the former Republican president Donald Trumpin as a great hero of the place in the heart of the Christian right in the United States. During his term, Trump appointed three conservative judges to the Supreme Court, which shifted the power of the court to a position of 6 to 3 in favor of the Conservatives. Trump is likely to run for president in 2024.

Politicon the news came out in an unprecedented way: as a leak. Someone had leaked a 98-page settlement in the Supreme Court in February, in which five out of nine conservative judges support the two most important preliminary rulings on abortion (Roe v. Wade 1973 and Planned Parenthood v. Casey 1992).

It is unclear how the Chief Judge will be leaned against the Conservatives John Roberts takes a stand. Three liberal judges objected.

If implemented, the decision would mean that each state would be able to decide in the future how they would view abortion. About half of the U.S. states are leaning towards conservative Republicans and in favor of very strict abortion bans. This would divide the United States even more drastically.

Last year, the Supreme Court decided to consider a law passed in Mississippi in 2018 that prohibits abortion in most cases after 15 weeks of pregnancy. According to Roe v. Wade, the pregnancy can still be terminated around the 23rd-24th. at the week of pregnancy, ie before the fetus survives outside the womb.

It has been predicted in the past that the law will allow Mississippi law to remain in effect, but would not necessarily overturn Roe’s decision to allow a broader abortion right.

According to Politico News, a decision on just one law is no longer enough for conservative judges. “Our position is that Roe and Casey should be overturned,” stated a conservative judge who wrote the majority summary Samuel Alito.

According to Alito and others, “Roe was blatantly wrong at first. Its rationale was exceptionally weak and its consequences have been devastating. ”

The actual decision of the Mississippi Law and Roe v. Waden will probably be issued in June, and at least in theory the draft published by Politico could still change.

Abortion has always heated not only the judges and politicians but also the feelings of ordinary citizens. National Abortion Federation by Between 1977 and 2020, the United States recorded abortion-related violence, including 11 murders, 26 attempted murders, 42 bombings, 194 arson, and thousands of other attacks on abortion clinics, from vandalism to death threats.

About surveys it turns outthat about half of Americans consider themselves opponents of abortion and a fifth are willing to ban them altogether. About a third think that abortions should be allowed in all cases.

A first taste of the Supreme Court’s thinking, changed by Trump’s judge appointments, came last fall when the court ruled 5-4 not to repeal Texas’ strictest abortion law, which states that abortion cannot be obtained after about six weeks of gestation. The onset of pregnancy due to rape or incest does not change the situation. Most pregnancies are not yet clear after six weeks.

Liberal Supreme Court judge opposed Texas decision Sonia Sotomayor said in its protest that Texas law is “blatantly unconstitutional”. Still, it remained in effect, and many Republican-led states began to work on laws that replicated the Texas model. In Idaho, a similar law was passed in March.

Sotomayor used harsh language as a judge last December when an oral hearing was held on the Mississippi abortionist now under review. According to him, the Supreme Court was creating a “lemu” around it and the impression that “the constitution and its interpretations are only political activities”. So powerful that the prestige of justice could not stand it.

Correction 3.5. 5:55 PM: There was previously an error in the numeric values ​​in the vertical axis of the article’s graphic. The number 50 was repeated in the numerical values. The graph has been corrected.