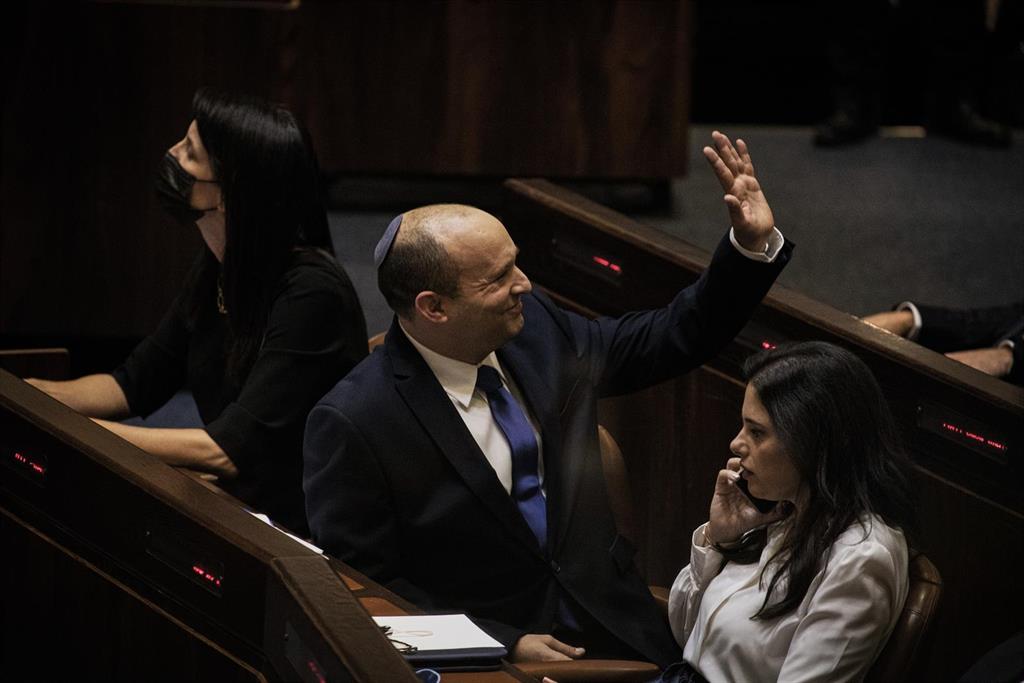 The Israeli Parliament, the Knesset, has approved this Sunday by 60 to 59 votes the investiture of Naftali Bennett of the nationalist Yamina movement, as the new prime minister, a vote that ends more than a decade of Benjamin Netanyahu’s mandate.

Following the vote, Netanyahu shook hands with Bennett. “I swear to be faithful to the State of Israel and its laws, to fulfill my role as prime minister in good faith and to respect the Knesset resolutions,” Bennett said at his inauguration.

Bennett has spoken these words with Lapid, who will be Minister of Foreign Affairs, and then the other members of the cabinet have been sworn in in alphabetical order.

The session has been highly eventful with interruptions from Netanyahu’s allies, who have yelled “Shame!” from the bench of the Zionist Religious Party and have shown images of victims of terrorism. The party’s leader, Bezalel Smotrich, and several of his associates have been expelled from the plenary session.

“I am very proud to be able to sit in a government with very different points of view,” Bennett said in response, while calling for containment.

Just before Bennett’s vote, the Knesset elected Mickey Levy, of the Yesh Atid party, as the new president, after obtaining 67 of the 120 votes in the House and thus beating his rival from the Shas party, Yaakov Margi, who has achieved 52 votes. Levy thus replaces Yariv Levin of Netanyahu’s Likud party.

The session has been followed in the streets by supporters of the parties of the new governing coalition that have celebrated the success of the inauguration, while hundreds of religious Israelis have concentrated on the wailing wall to pray in rejection of Bennett and Lapid .

Once the investiture was completed, the first council of ministers of the new Government was held with several first times: it is the first time that Israel has a prime minister with a kippa, the ritual cap of observant Jews, and the first time with Israeli Arab ministers. .

It was an open appointment to the press that began with the prayer of thanks or Shehechiyanu. “We are at the beginning of a new stage,” said Bennett, who has described the government agreement as a “marvel” and has promised work to overcome “differences within the nation.”

Bennett comes to power thanks to a broad coalition of Government that covers practically the entire political spectrum and that will allow him to serve as Prime Minister for the next two years, until he is replaced by the leader of the centrist Yesh Atid party, Yair Lapid.

In his speech prior to the vote, Bennett has accused Netanyahu of “fomenting a storm of hatred” in his final months in office, which have culminated in “a clash of brothers and a paralyzed country.”

“I am proud of the ability to sit with people with very different opinions. We have taken responsibility at the decisive moment,” he added in a speech where he mentioned the support of the Arab List. “A new episode of relations with the Arabs begins,” he declared.

However, Bennett has expressed his rejection of the negotiations on the Iranian nuclear program, which “is approaching a critical point” and reiterated that “Israel will not allow Iran to obtain nuclear weapons” because “it is not part of the agreement and will maintain total freedom to act “. “The renewal of the nuclear agreement is a mistake,” he concluded, in a message addressed to the US authorities.

The approval came after an extremely tense day by the threat of a deputy of the United Arab List – support of the coalition – to vote against the new government and later by the wave of invectives of the deputies of Netanyahu’s party , the Likud, against the two architects of the coalition. Lapid has not even been able to deliver his speech.

“I skip the speech that I planned to give today because I am here to say one thing: to apologize to my mother. She is 86 years old and we did not ask her to come lightly, but we did it because I assumed that they would be able to behave,” he lamented before to leave the stand.

In his turn to speak, Netanyahu has directed a barrage of criticism against the new government. “If we are destined to be in the opposition, we will do so with our heads held high until we overthrow this dangerous government,” the prime minister has declared until today.

This new government “is not suitable for Isarel.” “They understand it even in Iran. It is no surprise that they are celebrating today. They celebrate it because they understand that as of today there will be a weak and unstable government that will align itself with the dictates of the international community,” he said.

Finally, Netanyahu has recapped his achievements, including the American recognition of Jerusalem as the capital of Israel and Israeli sovereignty over the Golan Heights. “It was an honor for me to work day and night for our beloved country,” he declared.

The composition of the new government will be made up of representatives of eight parties from across Israel’s political spectrum and will be led by Bennett for the first two years as prime minister. Lapid, for his part, will serve as Deputy Prime Minister and Foreign Minister Yair Lapid.

One of the most important portfolios, Defense, will continue in the hands of Benny Gantz, leader of Azul y Blanco. Avigdor Lieberman, another longtime acquaintance in Israeli politics and distinguished for his extremist views, will lead the Finance portfolio on behalf of the Yisrael Beitenu party. The Ministry of Economy will remain in the hands of Yesh Atid’s Orna Barbivai.

Interior will be left to Yamina’s ‘number two’, Ayelet Shaked. Gideon Sa’ar, from Nueva Esperanza, will be the new head of the Justice portfolio, while his party colleague Yifat Shasha-Biton will hold the post of Minister of Education. Labor Omer Barlev will be the new Minister of Public Security.

Construction and Housing Minister Ze’ev Elkin (New Hope) will also serve as Jerusalem Affairs Minister and Knesset-Government Liaison Minister. The position of Minister of Intelligence will remain in the hands of Elazar Stern, of the Yesh Atid party. Orit Farkash-Hacohen (Blue and White) will be the new Science Minister and Nir Orbach (Yamina) will be in charge of the Settlements portfolio.