Claim: Russia cleans the streets of Mariupol and “pays” the Ukrainians with food to remove the corpses 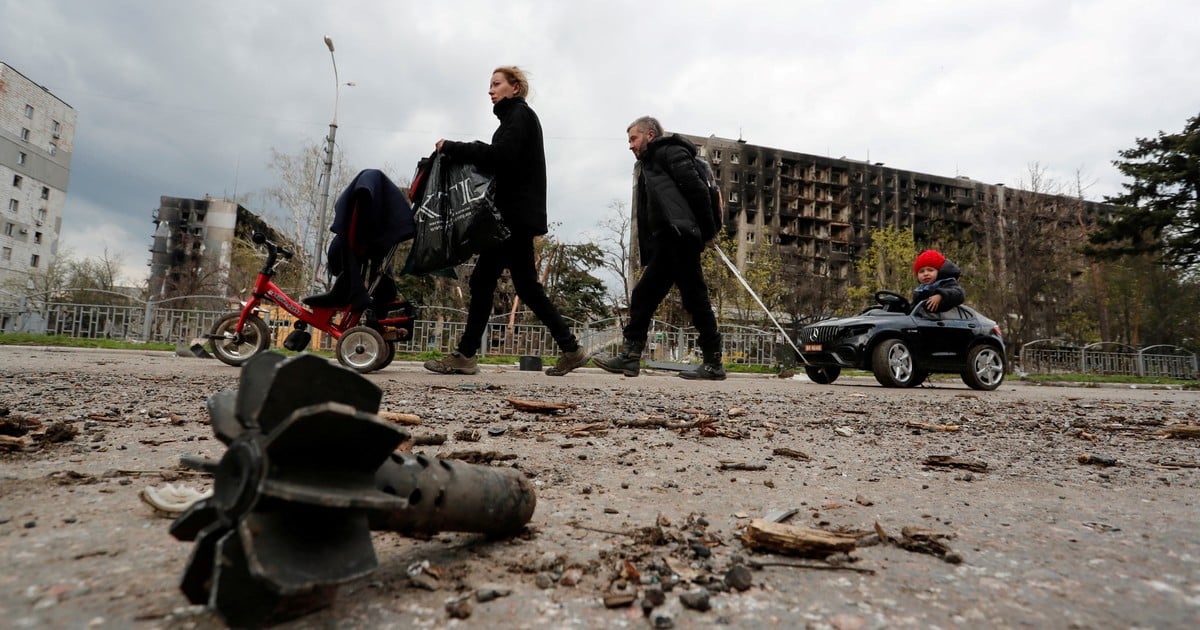 Two months of bombing and a city completely destroyed, which no longer serves any purpose. Russia wants to parade soon, perhaps during the May 9 celebration in Moscow, the conquest of Mariupol as a victory. For that reason the occupation forces began to work tirelessly to show that the site begins to be reborn under another sign and another flag.

Debris removal has begun and hardly anyone can see it. Moving ruins also means that corpses will appear of civilians killed during 70 days of fire.

New signs of horror at the same time that the UN and the organization Amnesty International openly state that evidence of war crimes abounds committed by the soldiers of the invading army.

A woman cries among the destroyed streets of Mariupol. Photo: Reuters

There are no journalists who can report from Mariupol. Zaporizhia, where he remains stationed Clarionin a straight line to Donestk, is the place from which to approach the crisis of the most punished city.

The last to leave were the local AP correspondents, who by dint of courage and dedication managed to show the world a part of the atrocities that the Russians were committing there.

Since then, no one can fully explain the real situation of the city, where there are still 100,000 inhabitants barely surviving, without water, without electricity, without gas.

Even at the risk that the information is not one hundred percent checked, it is the social networks that are beginning to assume a place that journalism, for reasons of security and physical integrity, cannot cover.

It is on Facebook and Telegram where they are appearing home video leaks made by Russian soldiers or by the inhabitants themselves. They are recordings that Russia can’t contain.

This Friday one appeared on Myr Avenue, one of the main avenues in Mariupol, in which you can see Russian heavy trucks and machinery starting to clear the public road of debris.

The same video shows that are the ukrainians Those who work to move each stone stayed in the city. It is they, says the information, who must also remove or remove from each site the human remains that begin to appear. According to reports, those who lend themselves to this task are paid by the Russians with what is most needed in Mariupol: food.

Another shocking photo that became known this Friday is that of five workers, it is believed that Ukrainians who survived the siege of the city, who change a poster with the name Mariupol by another that says Mariupol in Russianin an attempt to make the city from now on become one hundred percent russian speaking.

A civilian lies dead near the Azovstal plant in Mariupol. Photo: Reuters

This is how the occupying forces operate once they are installed: they quickly activate the consolidation of the takeover, establishing the language and ordering the population to resume activities, but now under new control.

Mariupol, a port that the Kremlin considers key for its expansive plan, it is entirely under Russian rule. Only one Ukrainian resistance site remains in the area. It is the immense steel factory Azovstal (Azov Steel), where the last remaining military units of the Azov Battalion are resisting and an imprecise number of civilians are sheltering underground.

those people take 70 days hidden inside a system of bunkers that the plant had with supplies of water and food for its employees. Due to an agreement between the UN, the United States, Russia and Ukraine, this week the the first evacuation of refugees a group of 150 people whom Clarín interviewed days after they arrived safely in the city of Zaporizhia.

A new evacuation of civilians trapped in the plant was scheduled to take place this Friday. There was talk of a convoy of buses for 500 people. But the troops that control the area shot at one of the vehicles who traveled to pick up people and a ukrainian soldier died.

Six other fighters were wounded. According to Ukraine’s complaint, the attack occurred during a previously agreed ceasefire.

The situation in Azovstal it’s desperate. In the last 48 hours, Russia did not stop bombing the plant constantly and all the videos that reach social networks show the mushrooms of smoke that rise from the very heart of the steel mill while the artillery, tanks and planes do not stop firing and falling on them.

Another video, which Azov soldiers sent to The New York Times, shows fighters descending into one of the bunkers and bringing gifts to the children trapped there.

The first evacuation of refugees from Azovstal had been unblocked after the visit of the head of the UN, Antonio Guterres, to the region.

The organization, which could do little or nothing to prevent the massacres of this war, had placed all its expectations and the desire, moreover, on that mission to rescue something of its questioned image.

The first evacuees were received by United Nations experts sent to collect their testimony as evidence of the alleged human rights violations committed by the Russians.

A girl evacuated from the Azovstal steelworks. Photo: Reuters

Clarion He witnessed that meeting and that first stage, difficult to specify, but finally carried out successfully. He had to continue with this new evacuation but the bombs, again, They stopped everything.

In the midst of the exchange of information, about the closure on Friday, the Russian state news agency RIA, through a correspondent on the ground, reported that 12 civilians, including children were evacuated by bus from the Azovstal steelworks.