The Russian helicopter tried to take off 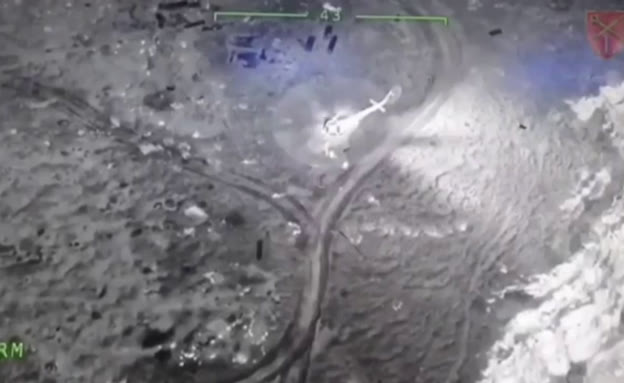 Trying to take off – and snatching a missile from the air: A rare document released today (Sunday) by the Ukrainian army shows the downing of a Russian helicopter that tried to take off in the area of ​​the Snake Island that was occupied by the Russians after the invasion of Ukraine. The documentation shows the helicopter being destroyed using a UAV TB2 Made in Turkey. The Ukrainians claimed that the helicopter crew was killed.

Satellite photos analyzed by the @AP from @planet show the aftermath of a suspected Ukrainian drone strike Friday on Russian positions on Snake Island, with thick black smoke rising overhead. The Ukrainian military has been publishing videos of strikes there. pic.twitter.com/UD05siiusQ

The Ukrainian documentation was published against the background of fierce battles taking place in recent days on Snake Island. Over the weekend it was alleged that the Ukrainians destroyed a Russian ship off the island off the coast of Romania and serves as a strategic point for both the Russians and the Ukrainians.

Today, when trying to deliver the TOR anti-aircraft missile system to the Zmeiny Island, a large landing craft of the Serna type was destroyed by air strike

Before that, another TOR-type air defense system was destroyed on Zmeiny Island, also by an air strike. pic.twitter.com/4z5YvGtTL2

As we can observe, there is serious damage. pic.twitter.com/ogN3gOU8uJ

Simultaneously with the Ukrainian attacks, Russian Defense Ministry spokesman Igor Konshenkov told a media briefing that the Russians had shot down a Ukrainian combat helicopter on the island. SU-27Three helicopters Mi-8Bomber SU-24 And a Ukrainian boat.

Snake Island made headlines at the beginning of the Russian war in Ukraine after the Ukrainians got in touch and sent the Russians “to hell”, and were subsequently attacked by the Russian army. At first there was concern for the lives of the Ukrainian soldiers, but it was later learned that they survived but were forced to surrender.

In Ukraine, residents were warned against intensifying attacks today and tomorrow, due to preparations for the commemoration of Victory Day over Nazi Germany in World War II, which took place on May 9. Russian President Vladimir Putin has a hard time presenting victories at the front and therefore, warn Ukraine, there could be multiple shelling. In Ukraine, residents are urged to stay in their homes for the next two days.

At the same time, Western support for Ukraine is growing – and not just from diplomatic representatives: Jill Biden, the wife of US President Joe Biden, arrived at the Ukrainian border today. While visiting Slovakia, she met Ukraine’s first lady, President Volodymyr’s wife Zalansky, Olena, Canadian Prime Minister Justin Trudeau also visited Ukraine, including a visit to the suburbs of Kyiv, in the city of Irpin, which has suffered many severe casualties and losses, in what Ukrainians describe as crimes against humanity.

Also a band U2 Came to perform in the suburbs of Kyiv together with Ukrainian artists. Recall that singer Ed Sheeran recently released a song together with a Ukrainian band with the aim of publicly supporting the end of the fighting.

Stand by #Ukraine!@U2 perfoming together with singer and defender Taras Topolia @antytila_offic in a subway station in the heart of #Kyiv that serves as a bomb shelter now.#StandWithUkraine#StandUpForUkraine pic.twitter.com/PsVW3ZsN8X

One thought on “The Russian helicopter tried to take off”