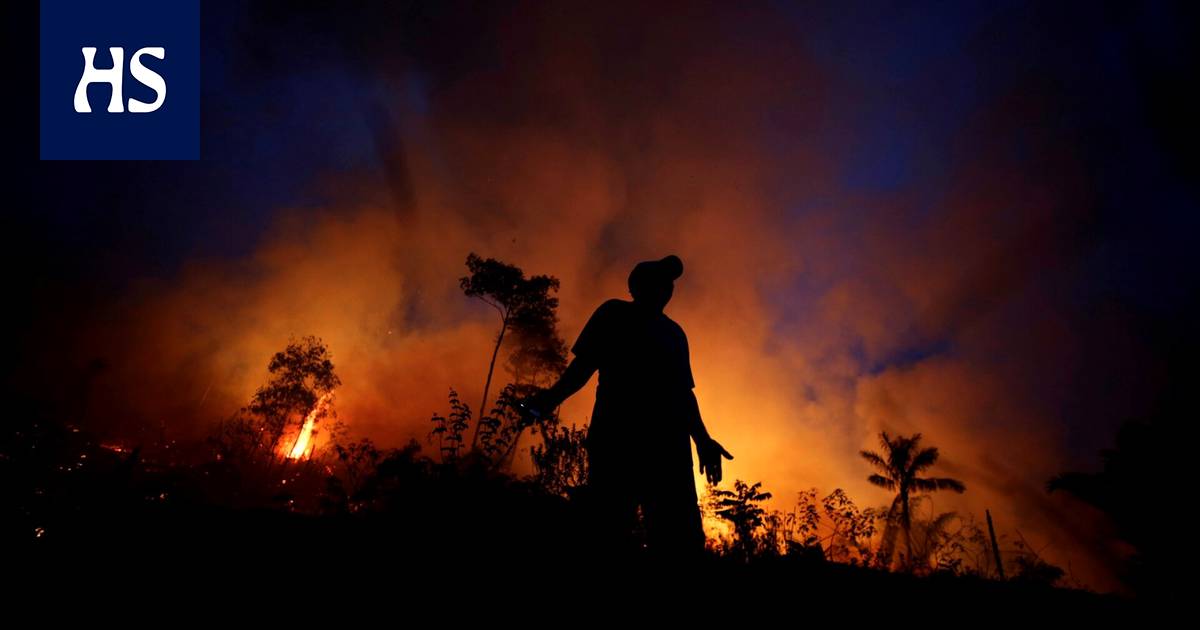 The leader of the Stop Ecocide campaign tells HS that humanity will not stop sawing its own branch until it is made criminal.

Sotarikos and a crime against humanity. Those bad-sounding words have returned to the news of the Russian president Vladimir Putin started the war in Ukraine. However, they are not mere words. They are criminal offenses for which the perpetrators can, at least in theory, be held accountable for their actions.

In March, the International Criminal Court (ICC) in The Hague, the Netherlands, announced that it had launched an investigation into the events in Ukraine under those headings. There is enough material.

In addition to those two titles, the ICC also has the power to convict those responsible for genocide, or genocide. In addition, since 2018, its competence has included the fourth heading as an offense of aggression, ie the commencement of a war of aggression.

Crimes can be added to the jurisdiction of the ICC, and so is the British Jojo Mehtan led by an international campaign Stop Ecocide International is going to do. If the campaign achieves its goal, the world’s biggest environmental criminals could also be prosecuted in The Hague in the future. For example, they could be the leaders of companies or states that have caused extensive environmental damage.

The criminal title would be ecocide, natural destruction. It is derived from the English genocide genocideword.

“I believe ratification of the natural disaster could begin in four or five years,’ ”Mehta says in a video interview with HS. According to him, the climate, both politically and literally, is now such.

According to Mehta, current environmental laws are not enough to stop the “sawing of one’s own branch” by humanity by heating the climate and polluting the natural systems that sustain life.

“We still have serious difficulty realizing our dependence on nature,” he notes.

Mehta believes that ecocide legislation would place environmental crimes in their gravity.

City workers collected dead fish from the shores of the Mar Menor Lagoon in Spain in August 2021. The natural rich Mar Menor, contaminated with agrochemicals and mining waste, is one example often used in the context of the ecocide law. Picture: Eva Manez/Reuters

Ecocide-laki is no longer just a wild idea. Discussions are under way in several member states of the International Criminal Court, and the Finnish Foreign Minister is also in favor of continuing them. Pekka Haavisto.

“Finland clearly wants to be involved in the debate, which is encouraging,” says Mehta.

The Pope has brought visibility to the issue Francisa climate activist Greta Thunberg and a musician Paul McCartney. Also Vice-President of the European Commission Frans Timmermans has called for further discussion to define natural disasters. Most recently, the Danish Parliament has taken a stand.

The biggest step came last summer when the definition of natural destruction was introduced to the signatories to the Rome Statute, which established the ICC. It was drawn up by a panel of experts and reads as follows:

“Ecological destruction” means an illegal or arbitrary act committed in the knowledge that such acts are likely to cause serious and either widespread or long-term damage to the environment. “

“It’s not about, for example, a few trees being felled in the way of the city’s rental housing. This is nothing local. It must be something that can be considered one of the worst crimes in the world. ”

Widespread or long-term impact means that the destruction is either very extensive geographically or affects, for example, an entire species or even an ecosystem. It would also cover inanimate nature such as the bedrock, glaciers and the planet’s water resources.

“This could be, for example, a major oil spill with inadequate safety measures, or massive deforestation or similar pollution in the Niger estuary.”

In the case of the Niger Estuary, the oil company Shell finally admitted in court that more than 17 million liters of oil were leaked into the environment from its pipelines.

Crude oil spilled into an estuary in Ogon, Nigeria in February 2020. Locals would like to sue oil company Shell over the damage caused by the spill. Picture: George Osodi / Bloomberg

The Natural Disasters Act would not have retroactive effect. Instead, its design is such that actual destruction might not even need to happen. It is enough to pose a risk.

Mehta points out that the same is true for war crimes: for example, the bombing of a theater that serves as a civilian evacuation center is a war crime, even if civilians survive.

This would force companies to rethink their actions. Today, much of environmental regulation is based on limit values. Often, listed companies with an obligation to maximize shareholder returns do everything that is not specifically prohibited.

For example, a certain amount of toxins may be released into the environment as long as the safety limits are not exceeded. Mehta believes this approach is wrong when it comes to the living conditions of the planet and the survival of the rest of nature.

“For example, if you want to create regulations that prevent workers from breaking their skulls at work, you’re not approaching asking how we could almost break their skulls, but not quite.”

About the performance may indicate weaknesses. The most obvious is that among the countries that have ratified the Charter of the International Criminal Court, large countries such as the United States, China and Russia are missing.

In Finland, the ecocide campaign is run by a former ambassador Mikko Pyhälä. In his view, the lack of great powers is not as big a problem as one might imagine.

“If a U.S. party commits acts that appear to be natural disasters in a member state, then the International Criminal Court’s prosecutor’s office can begin investigating them.”

Only individuals, not companies or states, for example, could be blamed for natural disasters. Syhälä admits that finding an individual culprit in environmental crimes may not always be easy. However, he emphasizes the preventive effect.

“This would welcome international economic competition, because then free-riding companies riding in natural disasters would lose their competitive advantage,” says Pyhälä.

“If a crime is devastated by the International Criminal Court, then companies suspected of it would have difficulty obtaining loans, guarantees and especially insurance.”

The Court has 123 member states. In order for natural disasters to be included in the repertoire of the International Criminal Court, two-thirds of them would have to stand behind it. It would probably make it easier for the great powers not to take part in the vote.

The sanctuary itself was interested in the initiative because of the Amazon rainforest. He has been worried about its condition for a long time. Felling and clearing of Brazilian rainforests has accelerated the far-right president Jair Bolsonaron during the reign. Ecologists have expressed concern that the ecosystem of the world’s largest rainforest will cross this point, after which the rainforest would no longer sustain its own rainfall but begin to dry into savannah.

Read more: According to a Swedish professor familiar with Netflix, there are nine “planetary boundaries” that humanity should not cross – “This is the last chance”

Campaign leading Jojo Mehta says he understands that the new criminal law concept arouses suspicion and even fear. He himself thinks, however, that the ecocide law would increase the security of all by providing a “legal security barrier to human economic activity”.

He thinks that man-made rapid global warming and the exceptional rate of natural loss in the history of the planet have, in any case, pushed humanity toward “totally unknown soil”.

“It’s a lot like driving on a road you don’t know. Then you want to follow the traffic rules. ”