From Biden to Draghi, the spotlight will be on sanctions in Moscow and help in Kiev 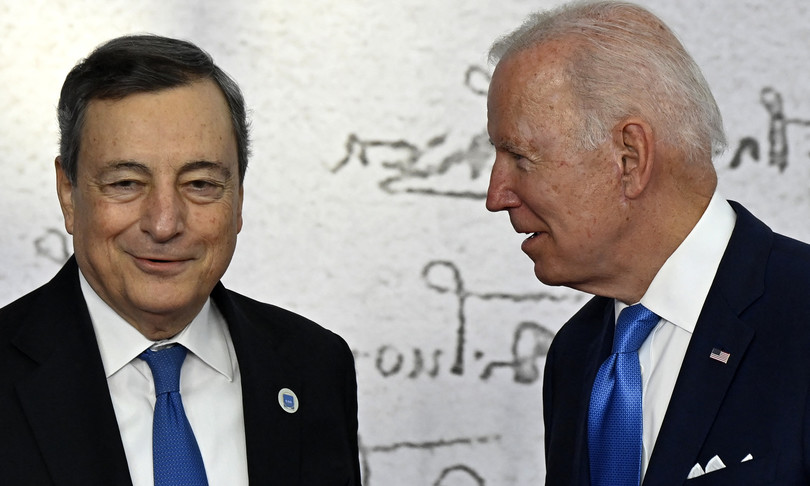 Sanctions against Russia, backing for Kiev, allied coordination, and energy security are all on the table. These are some of the topics the Prime Minister will discuss with President Joe Biden tonight at the White House. Mario Draghi will pay his first official visit to the US capital in Washington. At 8 p.m., the two presidents will assess the situation and reaffirm “great relations and the transatlantic link’s stability.” Tomorrow, Draghi will meet with the press, and at 20.40 in Rome, he will meet with Nancy Pelosi, the Speaker of the House of Representatives, and the leaders of the Congress’ political parties.

Following the Atlantic Council, he will receive the Distinguished Leadership Award, which recognizes him as one of the world’s most influential politicians in the previous year. “In the face of Russia’s invasion of Ukraine, the values expressed in the Ventotene Manifesto are more relevant than ever,” Draghi wrote to the Ventotene Europa Festival yesterday. She called it an occasion to “renew our commitment to freedom, democracy, and peace” as well as “reflect on the role of the European Union and the ideas that motivate it.”

The parties are keenly following the Prime Minister’s journey to the United States and are pressing for further European commitment. For the Democratic Party’s secretary, “The time for a ceasefire, a truce, and peace has arrived. Knowing that there is only one aggressor: Putin “, Enrico Letta is certain that “Italy, France, Germany, Spain, and Poland, five great countries, must act now, united for peace. First, visit Kiev, and then meet with Putin. We cannot be led by the United States; Europe is an adult. This war is taking place in Europe, and it must be stopped. It would be a mistake to sign a peace treaty in the United States, as it was in the former Yugoslavia “, he emphasizes.

The meeting between Biden and Draghi has high expectations for Matteo Salvini. “I wanted him to convey to the Americans the Italians’ wish for peace. No other weaponry will stop the battle and bring peace closer after over three months and tens of thousands of casualties, according to the League’s head. Both Zelensky and Putin claim that they want to talk. The essential point is that no one else wants to keep this war going “, he cautions.

Finally, the 5-star Movement is disappointed by Draghi’s reluctance to fight the government line in Parliament, and Giuseppe Conte is working to ensure that Italy does not approve the sending of “offensive” weaponry to Kiev. “If Biden spends $20 billion on weaponry, he is preparing for a lengthy conflict in Ukraine. His goals are at odds with those of Europe and Italy. We support NATO, but the EU must strive for genuine negotiations “In an interview with Fatto Quotidiano, vice president Riccardo Ricciardi says:

One thought on “From Biden to Draghi, the spotlight will be on sanctions in Moscow and help in Kiev”