Does Putin himself still know what he wants from his war? 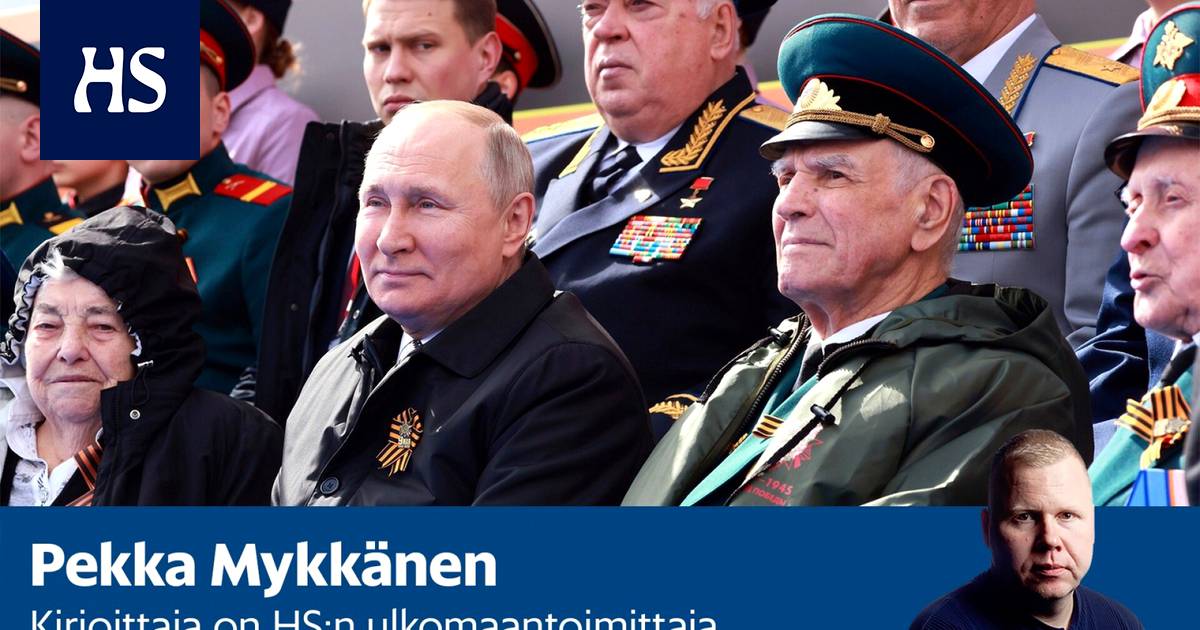 Researcher Arkady Moshes believes exaggerated expectations for Russia’s Victory Day were loaded in the West. He said Putin had no plans to end his war.

On Monday Victory Day was celebrated at the Moscow Red Square. There were high expectations and fears in the air that did not materialize.

President of Russia Vladimir Putin did not declare war on Ukraine, nor did it impose a general mobilization, which would have significantly increased the number of troops being sent to Ukraine. Putin also did not declare victory in Ukraine. He did not threaten to use nuclear weapons.

The party was shorter than usual. It was stripped of a flamboyant aviation show at the last minute, according to an official explanation, due to bad weather. “The cold wind was raining and water drops were falling from the sky,” characterized by an HS correspondent Jenni Jeskanen Moscow weather.

Aviation show the cancellation due to the weather is symbolic of the fact that Russia has not succeeded in doing anything in Ukraine. The capital Kiev could not be captured, Odessa has not dared to try to land, Kharkov is with the Ukrainians, the Moscow ship is lying at the bottom of the Black Sea and the Ukrainians continue to fight at the Azovstal steel plant in Mariupol – against all probability.

The war has progressed so badly that some people think Putin has facing only “various losses,” says King’s College London Military Expert, Visiting Professor Michael Clarke In a column published by the BBC.

Plan A was to overthrow the Ukrainian government urgently. Plan B was then attempted to seize or besiege large or strategically important cities. So far, there is only one clearer victory left: Kherson.

According to Clarke, the “victory” that Putin is now seeking is likely to be one in which Russia takes control of Donbas in eastern Ukraine and large areas of the south, perhaps as far as Odessa. This is Plan C, which is based on the frustration that A and B failed.

Foreign policy program director of the institute Arkady Moshes says Western media and commentators downloaded “exaggerated”Expectations for Victory Day. He said declaring war or mobilization would be “unnecessary” movements for Putin at this point.

“For me, Victory Day was by no means a critical day in the current situation, as the slow progression of the military attack has been evident for weeks,” Moshes says.

According to him, the message was successfully conveyed to the Russians that even though there is a struggle in Ukraine, life continues and Russia has room to remember the knees without greater drama.

According to Moshes, Western observers have been too hesitant to declare Ukraine victory in the war.

“Russia is a big country and it has its resources. It is not on the verge of collapse. ”

According to him, Putin can declare his victory at any time later if he deems it even necessary. There are no signs that the war will continue.

The United States president Joe Biden said on Monday he was concerned that Putin did not have a clear way out of the war in Ukraine. This begs the question: Does Putin himself still know what he is aiming for in Ukraine?

According to Arkady Moshes, it is a question of definition of what is understood as a victory or defeat at the end of Putin and within Russia.

“Strategically, it is obvious that Russia is disappearing. Time is not on Russia’s side, because money is fleeing the country, the economy is deteriorating, living standards are falling. Even if there is a ceasefire in Ukraine, the money will not return to Russia for a long time. ”

But when it comes to the events of the war itself, Moshes says Ukraine is moving more and more into World War I-looking “starvation battles,” in which the parties hammer each other with artillery and rockets, and the number of casualties is huge. Putin is ready for them and so far they have the support of the people.

According to Moshes, the Ukrainians have had difficulty in achieving large strategic victories over the Russians with their counterattacks, especially in southern Ukraine. Russia, on the other hand, is still aiming to conquer the territory and achieve permanent land access to the Crimean peninsula, which it occupied in 2014.

“Strengthening the conquest works for Putin in Russia. … They can pretend to create some kind of credible success story, ”Moshes says.

BBC:lle Michael Clarke, a military expert who wrote, pointed out the possibility that Putin might expand his war in Ukraine or beyond in the near future.

“Escalation is built inside the current situation and Europe is in a very dangerous situation,” Clarke wrote.

Could that escalation join Finland? Finland is likely to send its application for membership in NATO in the coming days.

“I don’t think it would be too risky. Ukraine is of great strategic importance to Russia. Finland’s NATO membership is a huge thing, but it is less strategically important for Moscow than for Ukraine, ”says Moshes.

According to Moshes, Ukraine has been at the center of Putin’s ideas throughout his reign, while Finland is a much more distant entity to Russia.

“No. Stalin and not Lenin nor has Putin called the Russians and Finns the same nation, as Putin believes the Russians and Ukrainians are. And if you’re not the same people, country borders matter more, ”Moshes says.

He also says that “an open conflict with the West would be very painful for Russia”.

Last Saturday, Russian MiG-29SMT fighters practiced on a victory day at an air show in the Moscow skies. However, no fighters were seen on Victory Day.

age points out that, although the air show on Russia’s Victory Day was canceled, the Air Force’s general exercises were held earlier and conveyed to the Russian people the impression of a mighty military force.

This shows that Russia and Putin have the creativity to move from one plan to the next, if the situation so requires. In Ukraine, there is at least a plan C and the letters of the alphabet will suffice. And you can go back to the past.

For other Europeans, Russia’s major invasion of Ukraine has been a major shock and historic watershed. For Putin, on the other hand, the use of military force is a way of life.

One thought on “Does Putin himself still know what he wants from his war?”