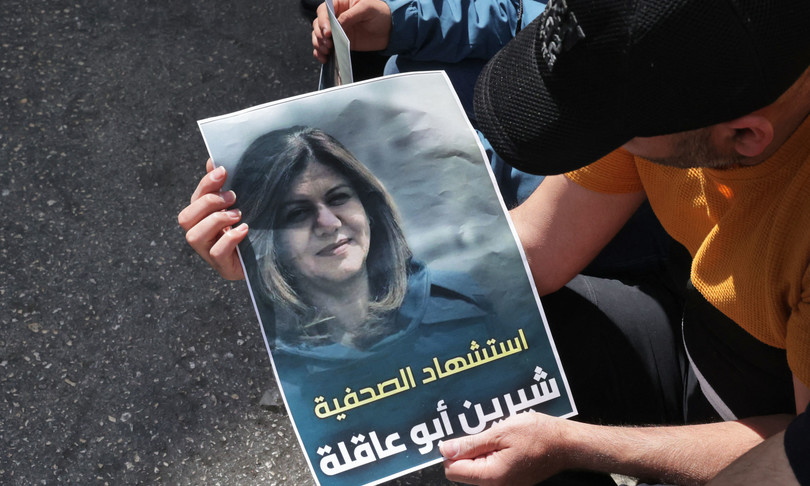 Shireen Abu Akleh, Palestinian reporter for al Jazeera, was killed while covering an Israeli armed forces operation in the Jenin refugee camp in the West Bank. Versions of the incident differ: the Palestinian National Authority, like the Qatari broadcaster, accuses the military of having “murdered her in cold blood” while Israeli Prime Minister Naftali Bennett pointed the finger at the “probable” responsibility of “armed Palestinians that they were firing indiscriminately at that moment. ”

The 51-year-old, well known and respected, was with al-Quds colleague Ali al-Samoudi, who was injured in the back but now in stable condition. According to reporter Shatha Hanaysha, also present in the car at the time “there were no clashes or shots fired by Palestinians“, the soldiers were in front of them and there was a wall behind them.

“We all had bulletproof vests and helmets, we were four reporters in an exposed area,” Hanaysha said. The Israeli army was “determined to shoot to kill”, “it didn’t stop shooting even after she collapsed, I couldn’t even reach her arm to reach her because of the gunshots.”

A scenario also confirmed by al-Samoudi according to which “there were no Palestinian militiamen on the spot”. “We were going to film the Israeli army raid and suddenly they shot us without asking us to leave or stop filming “.

Opposite the version of the Jewish state: “From the information gathered, it seems likely that armed Palestinians – who were firing indiscriminately at the time – are responsible for the unfortunate death of the journalist,” Bennett said, noting that he offered the Palestinians to lead. “a joint pathological investigation, based on all existing documentation and on the evidence to find the truth, but so far they have refused. ”

What happened, said the premier, will not stop “the counter-terrorism operations of the armed forces, with the aim of putting an end to the wave of terrorism and restoring the security of the citizens of Israel”.

In recent weeks there has been a series of attacks in Israel and in the Jewish settlements in the West Bank, as has not been seen for some time, costing the lives of 21 Israelis. The military has stepped up operations, focusing specifically on Jeninone of the strongest strongholds of Palestinian resistance.

The chorus of condemnation was immediate, from the PNA to the Palestinian journalists’ union, from the Red Crescent to Hamas. The American ambassador to Israel, Tom Nides, urged to conduct “a thorough investigation into the circumstances of the death”, as requested by the UN special envoy for the Middle East peace process, Tor Wennesland, who has ” strongly condemned the killing of Shireen Abu Akleh “. “The media should never be targeted,” he stressed.

Martyr Shireen Abu Akleh in the hospital as her colleagues call for her. She was shot in the head by the Israeli occupation ##ShireenAbuAkleh #Sherine_Abu_Aqla pic.twitter.com/l8jSi3slAw

“An international investigation” was also requested by the Arab-Israeli Islamist party Ra’am, whose leader Mansour Abbas was to hold a press conference this morning to clarify whether or not to rejoin the ruling coalition and instead canceled it.

Ra’am’s votes are crucial for the executive, rocked by the loss of its majority in the Knesset last month and surviving two no-confidence votes on Monday: Likud aims to present a new motion in the afternoon for the dissolution of Parliament and early electionsthanks also to the votes in favor announced yesterday by the Arab opposition of the joint list.

A heinous crime added to the hideous record of the Israeli occupation, as they killed the journalist #Sherine_Abu_Aqla Shot in the face while wearing a press jacket documenting their terror against civilians.

We all attached ourselves to Shereen, the free voice of Palestine, with this confident face, even in the darkest conditions in which the truffles tremble. May God accept her and our condolences to her family. pic.twitter.com/1EcyteYg7K

According to Qatari Deputy Foreign Minister Lolwah Al Khater, Shireen Abu Aqleh was “shot in the face” despite wearing a vest with the words ‘press’ and a recognizable helmet.

“The Israeli occupier killed Al Jazeera journalist Shireen Abu Aqleh by shooting her in the face despite wearing a vest with ‘press’ and a helmet. He was covering the attack by Israeli forces in the Jenin refugee camp. This terrorism of the Israeli state must cease, unconditional support for Israel must cease, “he wrote.

Prime Minister Shtayyeh to AGI: “We received with great shock the painful news and this criminal occupation that kills people and speech and kills the truth. Shireen Abu Akleh is a shining star in the sky of Palestine. We condemn this in all terms. homocide”.

Who was Abu Aqleh

There is no Arab family that does not know Al Jazeera journalist Shireen Abu Aqleh, killed in Jenin, in the West Bank, during an Israeli army operation. A leading figure in the Arabic service of the Qatar-based broadcaster told about Palestine over the past 20 years.

The reporter, also with American citizenship according to Al-Jazeera, had worked on La Voce della Palestine and Radio Monte-Carlo, before joining Al-Jazeera in 1997, where she was among the first correspondents from the field and became famous throughout. the Middle East for its reports on the Israeli-Palestinian conflict.

Al-Jazeera’s colleague, producer Ali Al-Samoudi, who was with her in Jenin and was wounded, accused the Israeli military of deliberately firing on journalists. “We were on our way to follow the Israeli army operation when they opened fire on us“, he said after being discharged from the hospital,” a bullet hit me. The second bullet hit Shireen. ”A video shows what Abu Akleh’s body should be lying on the ground upside down wearing the bulletproof vest that reads ‘PRESS’.

Its editorial team published the latest message sent by the reporter to the Ramallah office this morning at 6:13 am (local time): “Occupation forces are assaulting Jenin and besieging a house in the Jabriyat neighborhood. I am on my way there,” I will give you news as soon as the picture is clear “.

Al Jazeera in mourning: “Shireen was a model”

“Shireen, for every Palestinian journalist and every Arab journalist, was a model. Up to the last second she was professional and persistent.” Tamer Mishal voices the condolences of Al Jazeera reporters for the killing of their colleague Shireen Abu Akleh, shot dead while covering an Israeli armed forces operation in the Jenin refugee camp in the West Bank.

The last email sent to the editorial office at 6.13 this morning said that the military had surrounded a house in the Jabriyat neighborhood: “I’m going there, I tell you as soon as the situation becomes clear”, had written. With her were three other colleagues, all wearing helmets, flak jackets and identification bibs.

As the news broke, friends and colleagues began to gather outside his home in Beit Hanina in Jerusalem. She was born here 51 years ago, she in Jordan she had a degree in journalism and in 1997 he had started working for al-Jazeerathe first Arab all news set up the year before, and for the Qatari broadcaster it covered the Occupied Palestinian Territories.

On the site, there is a gallery of photos that show her, in the field, in the studio, grappling with a shot in the camera, during a connection with Jerusalem behind her. And follow the images of his body transferred by doctors to the morgue, ‘escorted’ by fellow journalists still with the helmet on, and then of the crowd in Jenin accompanying the body wrapped in the Palestinian flag with the blue flak jacket with the words ‘Press’ above.

The funeral will probably be held tomorrow after the autopsy

In al-Jazeera they are “shocked and saddened”, the price of blood paid in this region is high: here “in particular we have had tragedies”, underlined Giles Trendle, the broadcaster’s CEO, underlining however that “as journalists we go on. Our mission is to go on. We will not be silenced despite attempts to silence us “. “Our mission – he reiterated – is always to continue to inform the world about what is happening. And this is increasingly important”.

One thought on “Shireen Abu Akleh, Palestinian reporter for al Jazeera, was killed while covering an Israeli armed forces operation in the Jenin refuge”