The clash between Draghi and Salvini over the mandatory vaccine 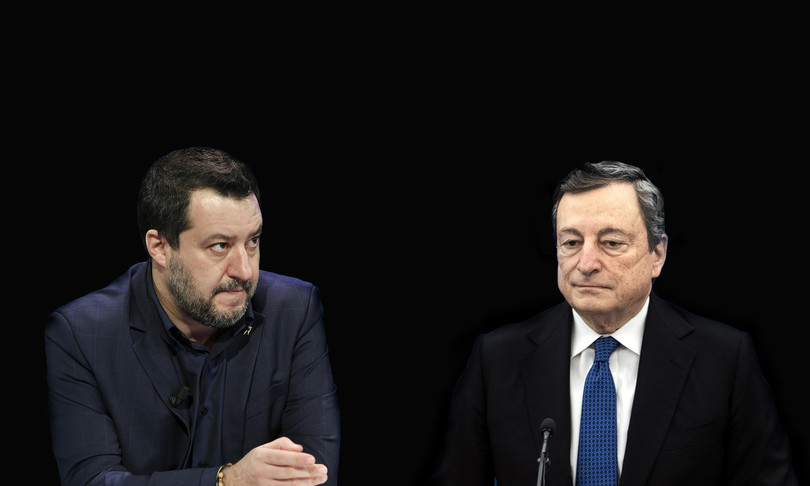 Mario Draghi says he is in favor of the vaccination obligation and the administration of the third dose, as well as anticipating that his government is oriented towards extending the green pass. Clear stances, those of the Prime Minister, who they go in the opposite direction to what Matteo Salvini publicly desired–

“Political clarification is done by the political forces. It is clear that greater convergence, greater discipline is desirable, but this government goes on”, the prime minister says, ensuring that the members of his executive are “in agreement”.

The Northern League secretary does not comment directly on the words of the premier but he must not have also appreciated the premier’s strenuous defense of the work of Minister Luciana Lamorgese and the strong criticism of those who question the reception of refugees from Afghanistan, other ‘sensitive’ issues for the Milanese senator’s party.

In the press conference held the day after the League’s ‘tear’ on the green pass in committee in the House, at the same time, however, Draghi hopes for a meeting with Lamorgese and his predecessor, defining it an “interesting” occasion, and does not shy away from publicly acknowledge Salvini’s leadership.

“I try not to make distinctions in the parties, because if I go in this direction each party has three, four, five, six souls. So, before deciding everything you should hear them, it has happened, and I assure you it is not pleasant. The League is one, has a boss who is Salvini and that’s it “, the premier points out, answering those who ask him if he prefers Salvini’s League or the one, considered more moderate, by Giancarlo Giorgetti, his minister of economic development.

There is no direct comment from the leader of the League at Draghi’s press conference. In a party note, however, the opposition to the vaccination obligation is reiterated: “More than 38 million Italians have already freely chosen and completed the vaccination cycle, over 70% of the population over 12 years of age, plus 5 millions of citizens healed. The League was and remains against obligations, fines and discrimination, remembering that in no European country there is an obligation to vaccinate the population “, reads.

“We insist instead, and we will bring the proposal to the vote also in Parliament, so that the state guarantees free, salivary and rapid tampons for all those who need them”. Another note then defines “an urgent and necessary meeting with Draghi and Minister Lamorgese“, citing the numbers of migrant landings. The premier then also assures that every decision on the green pass will be taken in the control room,” as requested by Salvini himself “.

In the morning, the party in via Bellerio had denied that yesterday there had been a telephone contact between Draghi and Salvini to comment on the League’s vote on the Covid decree. Relations between Salvini and Draghi were and remain more than cordial – it was underlined – and in the coming days they will meet again to agree and organize the demanding reform agenda for the autumn, from that of the public administration to that of procurement, from the reform tax to social security.

After yesterday’s ‘tear’, today the climate in the Social Affairs Committee in the Chamber has calmed down, where some of the League’s amendments to the Covid decree have passed, it is reported. The decree, and no longer in a circular, includes the exemption from the obligation of the green pass in the indoor restaurants of the hotels, decriminalized the responsibility of the organizers of the festivals, introduced the exemption for those who go to the spa for treatment, and introduced the recognition of molecular saliva tests.

“I very much agree with the line that President Draghi is pursuing, which is a safety line, a condition for the freedom of shooting activities to go to school, I think it is the best method”, comments Enrico Letta.

“For us it is okay to go ahead and extend the vaccination obligation and the green pass, because it is the condition to go forward. This is why in the majority of the government who is against the green pass is against freedom and against security. This is why we ask to the Lega a clarification on this point: we cannot stay with Draghi’s words today and at the same time vote against the green pass in Parliament. The two things are incompatible “, adds the secretary dem.