North Korea, the most hermetic country in the world, is confined by the “first” cases of COVID and with no vaccine in sight 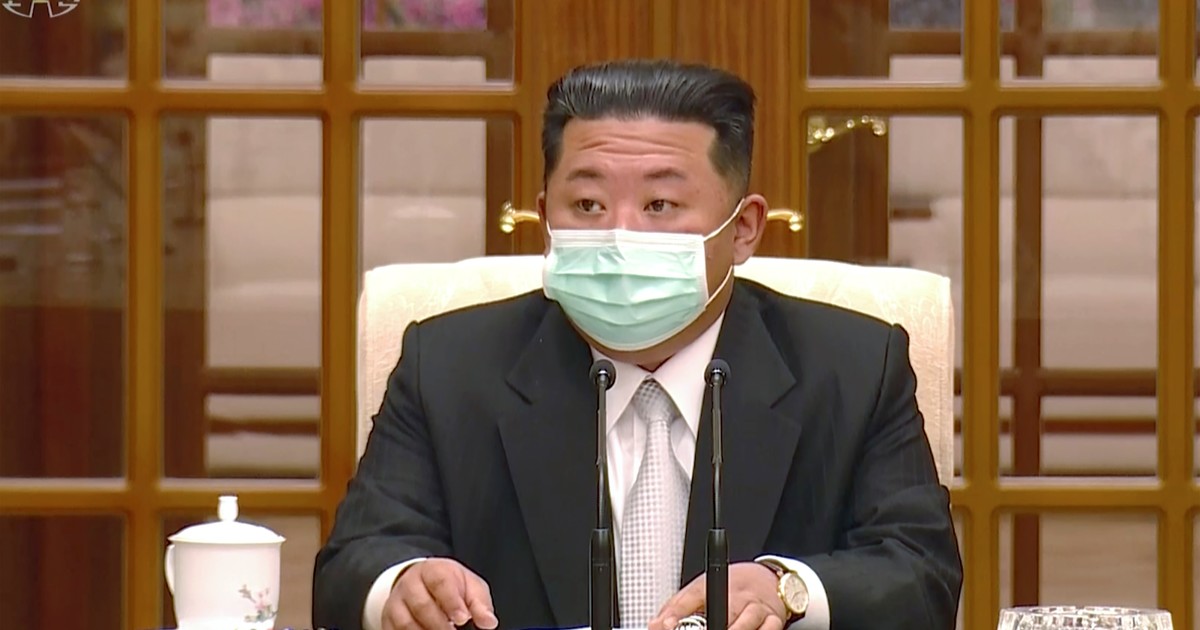 North Korea confirmed on Thursday its first cases of COVID-19 since the pandemic began and declared the “maximum emergency”, a situation that has caused concern due to how contagious the Omicron variant has proven to be and the fact that the isolated country he has not given a single vaccine nor does it have an inoculation plan yet.

The seriousness with which the regime is taking the situation was reflected in the fact that the country’s top leader, Kim Jong-un, appeared with a chinstrap during the announcement of the health emergency, and he only took it out to talk.

The authorities detected that samples taken on May 8 from people with fever “belonging to an organization in the capital” coincide with the Omicron BA.2 variant which has spread around the world since the end of 2021.

The KCNA agency, for its part, reported “a gap” in the epidemic prevention system that the country “has firmly defended for two years and three months since February 2020.”

The North Korean media did not offer more specific details or mention possible routes of infection.

The regime, which until now had not confirmed a single positive for COVID, made the announcement after specialized media such as NK News stated, citing local sources, that on May 10 it had suddenly decreed a confinement in Pyongyang.

For its part, the South Korean Ministry of Unification explained in a letter sent to EFE that its position involves cooperating “on a humanitarian level at all times” in health matters with the North and its residents.

Given the concern generated by the situation in the impoverished country, the North Korean army responded this Thursday with an apparent gesture of force by launching three missiles to the Sea of ​​​​Japan (called the East Sea in the two Koreas), qualified as ballistic and short-range by the South, in the third such test in the last week and the sixteenth so far in 2022.

Kim Jong-un took off his mask just to speak at his presentation. Photo: AFP

Kim “urged all cities and counties across the country to fully lock down their areas” to prevent further infection.

The leader stressed the need for the health system to carry out intensive tests, reinforce observation and medical treatment and intensify disinfection, for which he said that medical supplies “reserved until now for an emergency situation” will be mobilized.

North Korea maintains since 2020 a very strict system that includes preventing anyone from entering the country, reinforce border fences, shoot anyone who approaches the divide or disinfect for weeks the imports it gets from China by sea or rail.

In fact, the freight trains that circulate between China and North Korea and that for much of 2020 and 2021 were detained by order of Pyongyang They have recently been put on hold again due to the increase in cases in the neighboring country.

A health worker offers disinfectant to a schoolgirl in Pyongyang. Photo: AP

Amidst all that paraphernalia, the regime originally reported a case of COVID-19 in July 2020 from a North Korean defector who had returned to his home country from South Korea, though it eventually told the World Health Organization (WHO) that the test results were “inconclusive”.

The regime has refused to accept two shipments of the vaccine manufactured by AstraZeneca and Sinovac by the COVAX mechanism and is, along with Eritrea, the only country that has not reported a single inoculation to the WHO.

This seems to be due to the regime’s refusal to allow foreign personnel to enter the country to help prepare the necessary cold chains to distribute and store vaccines, a requirement of COVAX to deliver the almost 5 million doses that Pyongyang ended up refusing.

In 2021, Pyongyang turned down an offer of nearly 3 million Sinovac vaccines from Beijing. Russian officials have also said it has denied their offers of the Sputnik vaccine.

The meeting chaired by Kim Jong-un in which the confinement of North Korea was announced. Photo: REUTERS

According to the Institute for National Security Strategies, a think tank South Korean, the reason for the refusals is because the regime distrusts the effectiveness of the Chinese vaccine, and he is worried about the side effects of the British.

A March report by the Center for Strategic International Studies, a think tank US, suggested that North Korea would indeed be open to the possibility of receive vaccines made with mRNA technologysuch as those of Pfizer and Moderna.

Other experts believe that North Korea was able to reject them in turn so that the country, which makes self-sufficiency its maximumdo not depend on any external actor.

Also, that the vaccine he is trying to develop comes either from “reverse engineering” carried out on samples obtained from China and Russia or from information harvested in computer attacks about labs.

The lack of immunization and the strict controls that the regime may activate are worrying about the effects they may have on the North Korean population at a health, psychological, economic and food level.

The politburo said this Thursday that “the inconveniences and the suffering that people would suffer under a forceful closure situation” should be minimized, but the message raises doubts given how contagious Omicron is and the cost that a strategy such as “COVID zero” would have. “chinese in a country without logistical resources for such a plan.

It should also be remembered that North Korea, which has just opened its main annual rice planting window, has admitted to be experiencing food shortages during the pandemic linked to –in addition to the border closure– due to the droughts and typhoons it has suffered.

In turn, the shortage of intensive care units or medical equipment together with a testing capacity that seems scarce (until March Pyongyang tested only 64,207 people 0.5% of its population) could cause a health catastrophe if the virus runs rampant.

One thought on “North Korea, the most hermetic country in the world, is confined by the “first” cases of COVID and with no vaccine in sight”