Croatia: The parliamentary committee rejected the SDP law, the debate lasted until 4 in the morning, and the voting was at noon 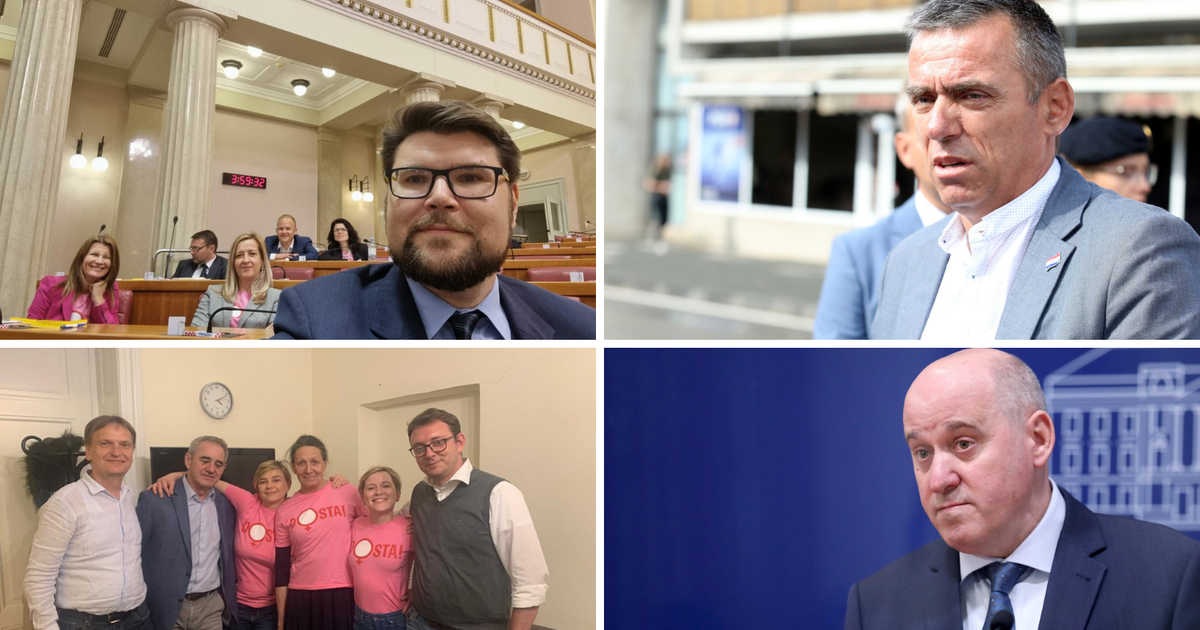 The debate on the SDP’s bill to regulate abortion lasted until four hours and 10 minutes in the morning. HDZ MPs partially filled their benches, and they left them very quickly. Hrvoje Zekanović also demonstratively left the Parliament.

“You are on the side of evil,” he told the SDP.

He told the people of Mostar to keep silent for seven years about this and what they have been doing so far.

– Now they will try to deceive the public and present themselves as pro-lifers, and they are not – he said and rushed out of the Parliament at the very beginning of the debate.

They accused the left-liberal opposition of collecting political points because they pushed for a law that should have been discussed and decided when it was determined by the Constitutional Court, back in 2018.

“You call abortion health care, equate pregnancy with disease, want to introduce sterilization and deny the right to life,” she said.

However, sterilization is already in the law and belongs to the right to choose to start a family, the right to private family life and the right to freely decide on the birth of children. It belongs to the part of preventing unwanted pregnancies where it is stated as a permanent choice, as opposed to contraception which is temporary.

– Sterilization is a medical procedure to permanently prevent conception. Sterilization can be performed under the conditions of this law – says Article 7.

These conditions are already defined in the next one.

The law also says that sterilization can be performed only at the request of the person being sterilized, and the request is considered by the commission of the first instance. There is also a second-instance commission in case the patient is not satisfied with the solution of the first. The law also clearly states that sterilization can be performed in any institution that has a department of gynecology and obstetrics for women and urology for men. Sterilization must be reported within 30 days of execution to the Ministry of Health for statistical purposes.

The right side of parliament also said that life begins with conception, but every human rights convention defines the acquisition of human rights on the basis of birth.

– All human beings are born free and equal in dignity and rights – it is stated at the beginning of the Universal Declaration of Human Rights.

Sandra Benčić warned them that the Croatian legal system does not treat embryos and fetuses as persons.

– Fetus does not have an OIB, address, name and surname. That is why there is no protection of the state that people have – she said and added that Andrej Plenković refuses to fulfill his obligation according to the decision of the Constitutional Court and pass a new law on abortion:

– Such a debate in the HDZ’s ranks does not suit his washed-up Brussels face at the moment when he wants to become the head of the EPP.

At one point, before everyone on the right side of the Parliament went home, Stipo Mlinarić Ćipo from the Homeland Movement also called.

– First of all, for me, life begins with conception and lasts until death, I am always for the culture of life, not the culture of death. Colleagues Sabina, Mrs. Ružica Markobašić pushed on November 20, 1991. year rifle barrel into the vagina and fired. What did they kill in it? She was seven months pregnant. A cluster of cells, protein or diet? Tell me, what is the difference between the state that does this legally and that Chetnik who committed a horrible crime, and in the end killed Mrs. Ružica Markobašić? What is the difference between the state and the Chetniks? For me, it is not there, they are the same if they do that – he said.

Peđa Grbin told him that he compared Croatia to the Chetniks.

– A colleague compared the independent and sovereign state of Croatia to the Chetnik. Talking about war crimes and drawing a parallel with the law that the Constitutional Court has confirmed is constitutional below any level – he said.

That is why Ante Sasnader gave him a warning.

– Mlinarić Ćipe did not compare the state of Croatia with the Chetniks. He is a Croatian defender and it is not correct for you to talk about him like that – said Sanader.

Sabina Glasovac of the SDP said the government was turning its head to disobey the law.

– The law should be modernized, women should be given access to information, education, contraception and abortion on demand without delay, questions, deterrence and misinformation, respecting their privacy and dignity. The government is turning a blind eye to growing conservative movements in society and allowing the health care system to fail because of fear of losing votes, and is afraid to oppose marching conservatism, she said.

Branko Bačić called their bill ‘scandalously under-regulated’ and ‘legally below the law passed more than 40 years ago’ and announced that the HDZ would not support it. He added that the very title of the law clearly reflects the position of the proponents that the basic direction is abortion, which is contrary to the decision of the Constitutional Court that abortion must be the exception, not the rule.

The Constitutional Court thus reasoned the decision that abortion and abortion must be legal, citing case law from the United States, France and the rest of the world.

– The criterion for their recognition, as already established by the Federal Constitutional Court, is the criterion of inadmissibility (BVerfGE 39, 1 [48 i dalje]). This criterion is justified (…) because, given the specific relationship between mother and child, the prohibition of abortion cannot be limited to the obligation of a woman to refrain from violating the legal sphere of another, but also implies an intensive obligation, which existentially affects a woman, to carry a pregnancy and give birth to a child, and in addition, entails an obligation to act, care and responsibility that will last for many years after the birth of a child … The first aspect is to protect women’s right to privacy on the right to life, on the one hand, and the potential father’s right to make a decision, on the other. The ECtHR considers that any interpretation of the potential father’s rights under Article 8 of the Convention, in the case where the mother intends to terminate the pregnancy, must first and foremost take into account her rights, since the pregnancy, its continuation or termination, primarily concerns her … positive obligations of the State within the meaning of Article 8 of the Convention. Namely, since the nature of the right to decide on abortion is not absolute, states are obliged to provide an effective legal framework that will ensure enforceability in practice and the effectiveness of legally guaranteed rights – the decision says.

The Constitutional Court also ordered the legislature to do everything possible to educate future mothers and fathers.

– It is up to the legislator, in addition to the necessary legislative changes for the aforementioned reasons, to determine educational and preventive measures in the new Act so that abortion is an exception. Within its wide discretion, the legislator is free to determine the measures it deems appropriate to promote sexually responsible behavior and the responsibility of both men and women in the prevention of unwanted pregnancies through educational and preventive programs, such as the inclusion of reproductive and sex education. The legislator may also, in order to allow a woman to be free to determine pregnancy and maternity, set an appropriate period of reflection before deciding to terminate or continue a pregnancy in which she would be provided with all information about pregnancy and services available to her (e.g. on counseling centers and health care during pregnancy and childbirth, on the labor rights of pregnant women and mothers, on the availability of crèches, on centers that provide adequate contraception and information on safe sex, and on centers where counseling can take place before and after pregnancy). It is also up to the legislator to determine whether the new law will regulate the issue of abortion costs (whether and in which cases they will be borne by women or they will burden the state budget), the question of appealing to doctors who do not want to perform abortions The Croatian Parliament to adopt a new law within two (2) years from the date of this decision in accordance with the above findings – the decision says.

However, the two governments, led by Andrej Plenković, did not do so within the set deadline, and yesterday the parliamentary health committee smoothly and without debate rejected the SDP ‘s proposal.

One thought on “Croatia: The parliamentary committee rejected the SDP law, the debate lasted until 4 in the morning, and the voting was at noon”