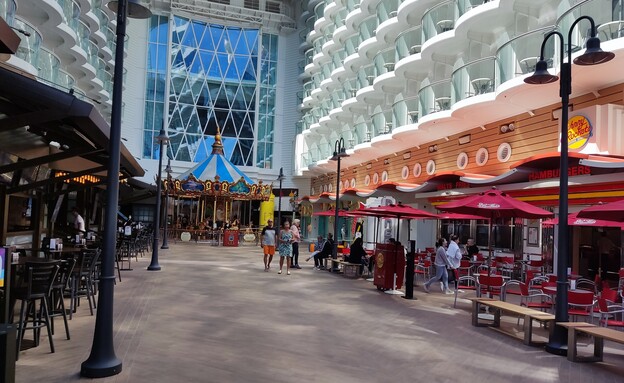 To try to understand how much Wonder Of The Seas, Royal Caribbean’s new cruise ship that boasts the impressive title – “the largest cruise ship in the world”, is huge, you can look at its dry and crazy data: 237 thousand tons, 362 meters long, 64 meters wide, 18 floors, 24 elevators, 2,867 different rooms, up to 6,988 guests and another 2,300 staff members. Another way to estimate its inconceivable size: when we got on it it took us about 3 and a half hours to visit all of its floors, and we did so at a fast pace.

The new ship was launched in late 2021 and its maiden voyage departed last March in the Caribbean. Now she has arrived in Spain and a week ago set out on her maiden voyage on a route that will pass through Barcelona – Palma de Mallorca – Marseille – Florence – Rome – Naples – Barcelona. She will do this route until October. The port of Barcelona is a 20-minute drive from the airport and boarding the ship is quick and easy.

When you enter the ship you do it on the fifth floor, through a sleeve just like at an airport, and what greets you is a street with shops, restaurants, pubs, ATMs, a concert hall and even a Starbucks coffee pavilion (where you can buy for an extra charge). Everything here is impressive from the first moment.

On the eighth floor, where our room was also located, is the “Central Park”, a promenade full of vegetation, restaurants and cafes. The formidable look of the surrounding floors, along with the open skies and cozy atmosphere of New York Street, are an impressive combination.

Central Park. Located on the 8th floor while the top of the slides in the picture are on the 18th floor.

Another impressive boardwalk – Boardwalk, is on the 6th floor of the ship. In contrast to the relaxed and pastoral atmosphere of Central Park, on this promenade you will find a more “happy” atmosphere: horse carousel, arcade games, hamburger restaurant, hot dog restaurant, sports bar, 2 climbing walls and an outdoor showroom that once a day presents a crazy acrobatics show called INTENSE.

The promenade can also be reached with the help of two dry slides that will take you directly from the 16th floor of the ship to the 6th floor. Nice idea for a shortcut.

One of the main areas is on the 15th floor where there are 3 pools, a Jacuzzi and a water park for children. Most hours of sunshine are spent on this floor.

As befits a huge ship, the amount of sunbeds here is large and the scatter between the 3 pools provides quite a bit of space.

During the day there are live performances from the bridge on the 16th floor and various films are projected on the huge outer screen.

There are 3 water slides that go down from the 18th floor to the 15th floor.

The water park for children.

Children also have an area of ​​playrooms on the 14th floor divided by ages. The room in the picture is for children over the age of 6. There is a room for children aged 0-3 and 3 to 6.

On the ship be sure to produce a mix that will suit young to adults. Thus, while children have their own play area, adults are given the solarium area. Entrance to this area is allowed from the age of 18 and up and you will find here sun beds, Jacuzzi, paddling pool, bar and mostly quiet and a place of refuge.

It is impossible to launch a huge ship without also having a huge casino. The gaming area is spread over almost half an entire floor. 4th floor if you were wondering.

The show hall on the ship which is on the 4th and 5th floors (stand).

Each evening there is a rotating show that is shown in two rounds.

To strengthen the Disneyland atmosphere on the ship, once a week there is a parade on the entrance promenade on the 5th floor.

The gym is also impressive in size and is located in the spa area on the ship on the 6th floor. Every day there are also open classes like a morning stretching session.

On the 5th floor, there is a running / walking route that encircles the entire ship and is mostly open to the sea. The full circumference of the route is 670 meters so three laps are 2 km. It is recommended to go for a run or walk at sunrise or sunset, just be sure to run or walk on the side designated for you.

If you’re into sports, on the 16th floor you will find a number of sporting attractions such as a full size basketball court.

Another attraction is surfing in a pool with streams, which is also suitable for those who have never skied. It’s also nice to just come and look at someone who can not hold for more than two seconds.

For those looking for a bit of extreme, there is the omega that passes over the Boardwalk which is 10 stories below. The ship also has a laser tag, an ice skating rink and an arcade room.

It’s time to talk about the most important thing on the ship: the food. The ship has a total of 9 places to eat as part of the basic package (including pizza, hamburger, bagel and more), 11 bars in different styles and another 13 restaurants for a fee. The two main places for food are the main dining room where there is table service and the buffet area in the picture (in the complicated name – Windjammer) where you can take your own food in different styles.

The pizza restaurant. As part of the included package you can eat whenever you want pizza, hamburger, Mexican food, sausages, bagels and more. This is in addition to the main dining room and the buffet area.

The Music Hall on the 8th floor where there are live performances. On the ship there are quite a few different theme areas that aim to suit different target audiences: sports bar, karaoke bar, stand-up hall, tropical style bars, bars where quizzes and bingo evenings for fans of the genre, card room and even a bar in June where machines will prepare you The drink.

This is what the corridors look like in the ship’s accommodation areas: long corridors with doors on both sides. Each such long corridor has 2 exit points for elevators, one at the front of the ship and one at the rear. At first it is confusing and they go quite a bit in the opposite direction, but in the end they manage to get to know and understand this huge ship as well.

The room we got was with a balcony to the sea. The room is large and includes a TV, a table with a mirror and a chair, a pull-out spa, a toilet and a shower and two closets. Recommendation: First thing when you get to the ship, unload your luggage completely to feel at home. This is a week-long cruise and this feeling is important.

On the ship there are also internal rooms (without window), rooms with an internal balcony to Central Park or the Boardwalk and there is also the Suite Street which is on the 17th-18th floors with suites of different sizes. Above them all is the Royal Suite which includes 2 floors, 2 bedrooms, 2 toilets and showers a huge balcony with Jacuzzi, living room and even a piano. In the photo: the family villa where there is also a slide between the floors.

The ship at night. On the one hand you can find quiet places and on the other hand it is about bogas on the water.

How much does it cost?

A 7-night cruise will cost from $ 810 in an internal room (to this must be added the prices of flights to Spain or Rome from which you can also board. The route includes: Barcelona-Palma de Mallorca-Marseille-Florence-Rome-Naples-Barcelona.

Royal Caribbean in the country

Royal Caribbean will start operating a cruise out of Haifa port in August on the ship Rhapsody of the Seas, which is in a smaller category in terms of size. The cruises will be 8-3 nights and will start at $ 210 per passenger in a double room for a three-night cruise in an internal room on the Haifa-Limassol-Haifa route. A full route including 7 nights will pass through the route: Haifa – Limassol – Rhodes – Mykonos – Santorini – Piraeus – Haifa (in 8 nights also anchored in Ashdod).

The reporter was a guest of Snorama, Royal Caribbean’s representative in Israel