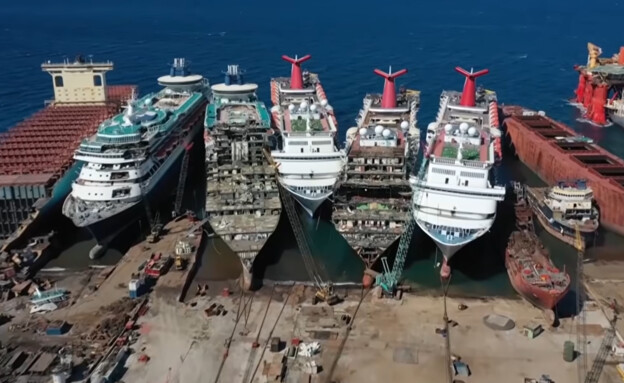 Adjacent to the shore, these ships that were once gleaming, are now lying dismantled and exposed, and can hardly be identified from their glory days at sea. These huge ships were once the pride of huge sailing fleets. Now they are just a skeleton of their former selves – on the beach at the Eliaga shipyard in Turkey, in the middle of demolition, ready to be sold for scrap.In the Turkish port city, about 50 kilometers north of Izmir, cargo ships and old containers are usually scrapped for metal recycling. Since 2020, like the planes of the largest airlines in the world that have had to shut down their planes following the corona, the large cruise companies have also often had to stop their ships following the epidemic, sometimes to the point of permanent shutdown.

As reported by Cruise Industry News’s leading news site, the Carnival Sensation ship of the giant American shipping company Carnival Cruise Line docked in the port of Eliaga for demolition in early April 2022. The ship, built in 1993, was recently modernized and expanded in 2009.

More and more cruise ships are being scrapped

In 2020, five different cruise ships from the same shipping company began their last cruise to Eliaga. These include the Carnival Fantasy ship, which according to a report by the Australian travel portal Traveler, underwent a comprehensive refurbishment just a year earlier.

In total, in 2020 13 cruise ships were sold to Eliaga or other dismantling ports, such as Elang in India, for scrapping. In 2021 the number was nine cruise ships, and in 2022 six so far. By comparison, in 2019, that is, before the outbreak of the corona plague, there were only two cruise ships scrapped around the world.

Now looking at the moored ships you can see swimming pools that are still intact, and green golf courses on board that are a sad contrast to the wreckage that is advancing towards them. In other pictures you can see the actual interior of the ship, corridors, rooms and large areas that can be assumed to have once served as halls or large dining rooms that received the thousands of sailors.

While the shipping industry is struggling with severe financial losses, the ship recycling port in Eliaga is experiencing a real boom. According to “Traveler”, sales in 2020 increased by 30 percent compared to 2019 – partly because now the cruise ships are also being scrapped on the spot. The process takes six to nine months to completely dismantle a large cruise ship like Carnival Sensation, where all parts of the ship are sold and recycled.

As soon as a cruise ship arrives in Eliaga, the vessel is torn to pieces. Everything inside, from the furniture to the bathrooms should be removed. Interior items may be sold locally to business owners or collectors.

And although more and more cruise ships are finding their final resting place in Eliaga and other ports, the construction boom in the industry is unstoppable. According to another Cruise Industry News report, about 75 new cruise ships are planned to be built by 2027 alone. The total volume of bookings is therefore almost 45 billion euros, with each ship offering space for an average of 2256 guests.