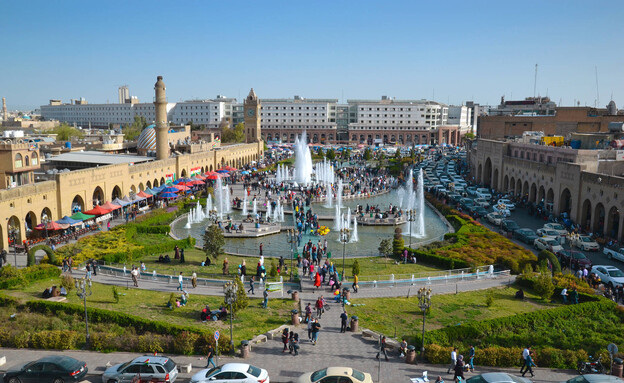 Iraq is supposed to be one of the most attractive travel destinations in the world, but the consequences of Saddam Hussein’s long rule and the war that followed, have made most of Iraq not a safe destination for international tourists. Most of the foreigners who have come to Iraq since Saddam’s ouster in 2003 have been wearing military vests and carrying weapons – but recently a small influx of pioneers has begun wanting to rediscover this controversial country.”Iraq has been one of my top three countries,” said 50-year-old California tourist Iliana Awala, who was thrilled to see Babylon’s millennial site of Babylon last March. “This is where civilization began. I think too few people understand how important this area is.”

Last year, Iraq attracted 107,000 tourists including from the UK, France, USA, Turkey and Norway. According to the Tourism Authority, this is a threefold increase from 2020. Despite the dramatic increase in the number of tourists coming to it, most Western governments still issue travel warnings for all Iraq Or parts of it, pointing to risks from hijackings to jihad bombings and unexploded ordnance from the multiple wars the region has known.

At the same time, for some of the brave tourists in the world, who are not afraid of military barriers, Iraq is a hot new destination with many world heritage sites gradually reopening to the world.

Decades of conflicts and wars

Iraq has twice in the last few decades tried to build the tourism industry and allow it to reach its full potential. The various politics and conflicts that befell the ancient nation have over the years prevented these projects from reaching a real culmination.

In the late 1970s, after the country began to develop and regenerate rapidly as a result of the oil boom, Iraq’s strained relations with its neighbors temporarily improved. It signed the Algerian agreement with the Shah’s Iran in March 1975, and relations improved significantly until the Iranian revolution four years later.

During this period, Baghdad made a serious effort to attract more tourists by building its tourism infrastructure with new hotels and marketing. It was part of a large multi-million dollar program aimed at attracting up to 500,000 tourists a year. The state has invested in tourism studies and a hotel training school, which included sending students to Arab and European countries to learn about the industry, and planned the publication of 100,000 tourist guides in various languages ​​as part of a campaign to polish the country’s image abroad.

After many years of conflicts and sanctions imposed by the West in the 1990s, tourism to Iraq has dropped from over a million visitors to the country a year to a few thousand. Many have been waiting for the moment when the sanctions will be finally removed and the numbers will increase. Eventually, sanctions remained in place until the overthrow of the Anglo-American invasion in 2003.

Between the Euphrates River and the Tigris: Hope for international tourism in the future

Just before the corona plague broke out, in 2019, the Iraqi Ministry of Culture, Tourism and Antiquities allocated about $ 78 million to repair the heritage sites and improve the infrastructure around them, especially in the Old City of Babylon. Through this move, Iraq hoped to attract world tourists to the country.

“As long as the security situation is stable, these allocations contribute to an increase in the number of tourists, as Iraq is classified as a tourist country in terms of nature, history, religions and many other things,” Iraqi officials said.

Now that the country is slowly getting back on its feet, the curious tourists are starting to take an interest in it again. Its doors are open to tourists who want to get to know the real Iraq, not just the one starring in the news releases.

Most tourists land in Baghdad, the capital of the country and also the big city in it. The city on the banks of the Tigris River has a long history, and is mentioned in old documents such as the Assyrian pegs from the 9th century BC. The city was founded in the 8th century, and since then has been the commercial and cultural center of the country due to its excellent location. Today, Baghdad is a modern metropolis and home to many museums including the “Iraq Museum”, which houses collections of relics and artifacts from the ancient cultures that inhabited the area.

As the second largest Arab city in the world (after Cairo), there is no shortage of markets in Baghdad. The most colorful of them is the Copper Market in the Old City, with an infinity of items all made of glowing copper.

The Martyrs’ Monument is perhaps one of Baghdad’s most iconic tourist attractions. The monument was inaugurated in 1983 and was originally dedicated to Iraqi soldiers who lost their lives in the 1980s Iran-Iraq War. Iraqis now consider it a monument to all Iraqi casualties.

Another tourist spot is the city in trouble (Basra) Located near the border that Iraq shares with Kuwait, along the Shat al-Arab River, which is actually the connection between the Euphrates and the Tigris. Batzra serves as the main economic engine since it has the largest port in Iraq. Saddam Hussein’s old palace in Basra has become a museum with thousands of artefacts associated with Mesopotamian, Babylonian and Persian cultures, some from 6000 BC.

Some places mentioned in the Bible are all located in Iraq. First, many believe that this is where the primeval paradise is, and that Abraham came from the city of Ur in Iraq. Here you can also find the ruins of the ancient Babylonian Empire that still stand in southwest Baghdad. The bombings and other tragic events that the place went through, to this day can be found in parts of the ancient kingdom.Belief Tower is believed to be in Iraq as well and is said to be based on the “Atmananki” which is a ziggurat (temple) dedicated to the Mesopotamian god Murdoch.

The roots of Iraqi Jews go back 2,600 years. Here they wrote the Babylonian Talmud, in the land where our ancestor Abraham was born. In Baghdad under the rule of the Ottoman Empire, 40 percent of the population were Jews. In 1948, when Israel was founded, 150,000 Jews lived in Iraq. Three years later, 96 percent of the community left, most of them immigrating to Israel.

However, there was a time when the Jewish minority in Iraq could boast of having 118 synagogues, 48 ​​schools and three cemeteries, according to a 2020 report. The study counted the Jewish heritage in Iraq and Syria, including extinct ancient sites, dating to the 1,000th First BC.

One of the remains that remains is the Meir Twig Synagogue located in one of Baghdad’s popular districts. Nothing really sets the faded brick building apart, other than the discreet Hebrew inscription exceeding the entrance, it was hard to spot a building forgotten with its glorious past that did not escape the ravages of time.

In this synagogue, built in 1942, time stands still. The structure is scorched by the sun, the benches are covered with white sheets, and the traditional light blue color of the walls crumbles. The stairs leading to the wooden house fall apart. The ark of the Bible is decorated with marble in which are engraved a lamp and verses of Psalms.

“Before that we prayed here, we celebrated our holidays, we attended religious classes in Hebrew in the summer,” recalls a member of the Jewish community in her reference to the locked synagogue. “Today our heritage is in a pitiful state. The state does not see us.”

The situation is similar in Mosul (Mosul), a northern metropolis liberated from the jihadists in 2017. At the bend of an alley shimmering paintings point to the ruins of the great synagogue “Sasson”. The collapsed ceiling reveals stone arches and columns, surrounded by scrap metal, rubble and garbage from the surrounding neighborhood.

But there is a glimmer of hope. Aliph, the International Alliance for the Protection of Heritage in Conflict Areas, has expressed its desire to support a potential renovation project in due course. Also, in January, the U.S. Consulate in the city announced Arbil (Erbil) on funding of $ 500,000 for the restoration of the small synagogue “Ezekiel”, in the rural area of ​​Accra (north). The tomb of the Prophet Nahum was also renovated with the help of American aid, funds from Kurdistan and private donations.