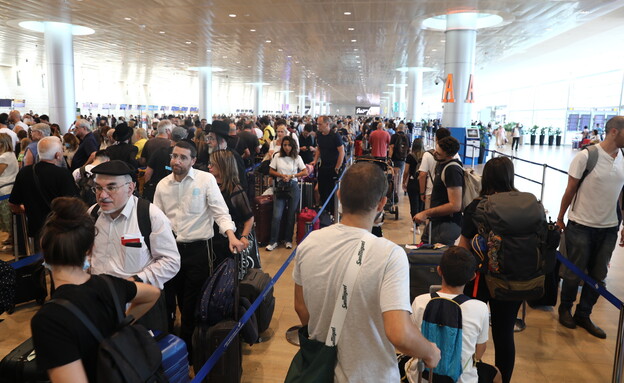 The huge queues at Ben Gurion Airport, which began during Passover, with the abolition of all corona restrictions, continue to be long and tedious: from the security check, through check-in to passport and luggage inspections.

Ben Gurion Airport says that many workers are missing to end the chaos and reduce waiting times. Recruiting and training workers in the required number may take another full year. The peak period at Ben Gurion Airport, the situation is expected to be even worse.

Ofer Lefler, a spokesman for the Airports Authority, claimed this morning: “There are no four hours in line, this is an urban legend. It is very easy to make drama out of anything. I tell people – do not come more than three hours before the flight, for one simple reason: check in Three hours before. ”

What is the average waiting time in a security check for a person?
“Between 25 minutes and half an hour. This is very normal. Before the Corona, in 2019, we were with 24,000 passengers a day. The average passenger from the moment he got out of the car until Duty Free was an hour. True, it went up, we would like to shorten it, but true “The average moment is about an hour and ten minutes, and some arrive after an hour and a half or more.”

What causes it and how will you shorten it?
“Until the end of March we were in Corona. I do not know many bodies that grow more than 300% in three months and can meet all the demand. Currently there are almost zero passengers left in the country, even if it takes an hour and a half and even two hours. “The problem is not just security. Ground services companies are missing hundreds of workers, we are missing more than 1,000 workers. Each flight takes longer to leave.”

On the one hand you say that 1,000 employees are missing, and on the other hand that within an hour and ten minutes we are on duty free.
“There are those for whom it takes two hours, but I will say again: we could do what they did in Schiphol and Heathrow and cancel thousands of flights, delete them from the board. This is what the world is currently doing. El Al has canceled a limited number of flights, but use the term chaos? “Heathrow, which has more than 50 million passengers, is deleting close to ten million seats in Mecca. We committed this summer not to take off one flight and allow anyone who has purchased a ticket to fly.”

Is this a destiny? Can’t think of solutions?
“This is a chain, it does not depend only on us. In the coming days we will open the airport in Haifa for early check-in. We will also be able to check in early at Terminal 1, for a large part of EL AL flights. We are doing more and more processes to shorten queues. “We want you as long as possible in Duty Free, so we make every effort to get you there as soon as possible.”

What do you expect for the waiting times in July-August?
“The recommendation is still to arrive three hours before, do not go any further. Pass the security, but get stuck at check in because it is not open yet. I recommend everyone to travel only with a trolley, not to send luggage, check in from home and come with a lot of patience And tolerance. ”

How long will it take you to recruit the missing workers?
“I call on young people to come and work with us. This is an excellent work environment, a rewarding salary and the opportunity to study. A security inspector earns around NIS 14,000 a month, depending on what shifts he does. This salary can also be increased. We also give incentives at the end of a period.”