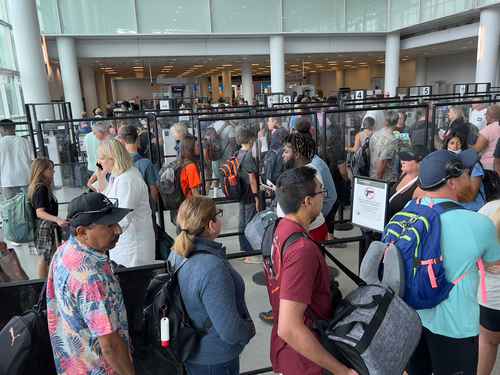 Flight demand threatens to outstrip airline capacity over the US holiday weekend. Passengers line up to go through security at Charlotte Douglas International Airport in North Carolina.Ap Photo

Airports in various cities in the United States and Europe look crowded this weekend; in the first case due to the high demand for passengers during the holiday for the celebration of Independence Day, with crowds that had not been seen since the pandemic began in 2020. In the old continent, the strike of two low-cost airlines left thousands of people stranded in Madrid, just at the beginning of the summer holidays.

In addition to the usual crowding for the date, travelers face inconveniences such as dozens of flight delays and cancellations, mainly due to the loss of airline personnel that has been affected by the covid pandemic.

According to the Flightaware monitoring site, as of Saturday afternoon, a total of 22,218 delayed flights were registered worldwide.

As for cancellations, the site recorded a total of 2,341 flights. Of them, 636 to or from the United States.

About 2.49 million passengers passed through security checkpoints at US airports last Friday, surpassing the previous pandemic-era record of 2.46 million reached earlier in the week, according to figures released Saturday by the Transportation Security Administration (TSA).

Friday’s passenger volume marked a 13 percent increase from July 1 last year. The industry is struggling to manage an increase in flights that is likely to exceed its current capacity.

Exasperated Americans have devoted thousands of comments on social media to a wide range of complaints ranging from overcrowded terminals and immigration halls to inefficient transportation methods and endless security checkpoints. Chaos and delays go crazytweets.

The mobilization of Ryanair and EasyJet in Madrid, two low-cost companies, to demand better wages and working conditions, coincided with the end of the school year in Europe and the summer vacation season.

Users have not received support from the airlines due to the loss of connections or reservations in their lodging.

(With information from Ap and Afp)