The forest house: Hotel and sustainability center in Hamburg 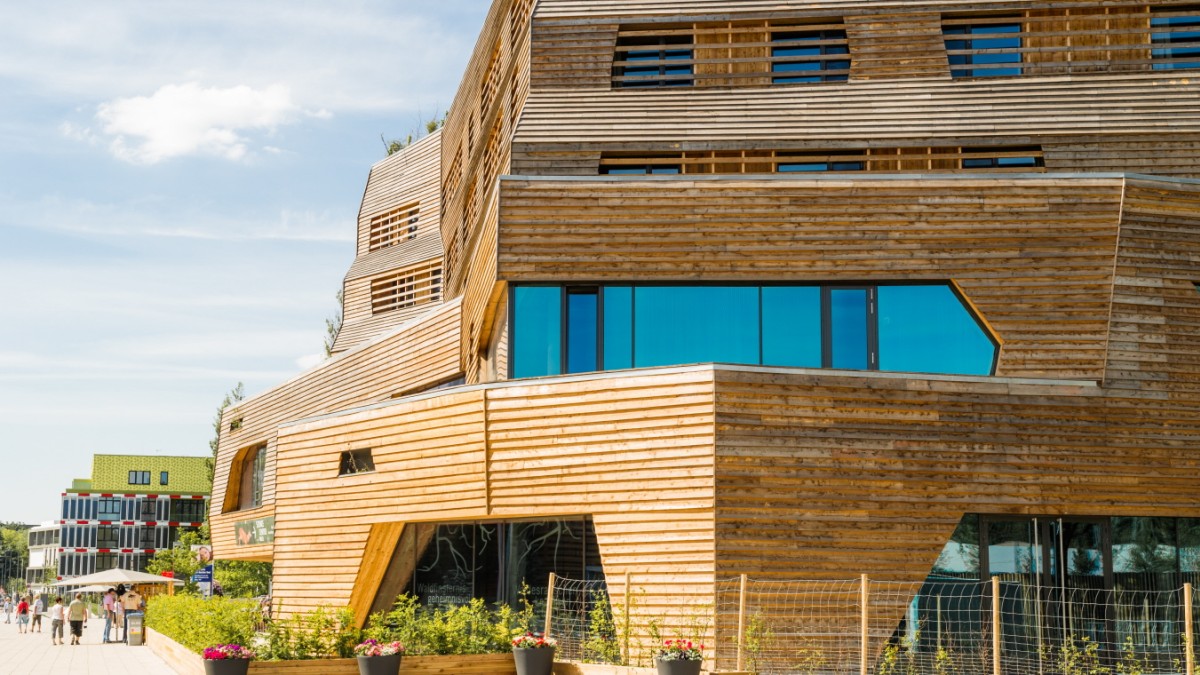 The nightjar has done it to Michael Rademann. So much so that the ornithologist is on Friday evening at 10 p.m. with a school class in the Fischbeker Heide to track down the special bird. The nightjar is nocturnal and makes a noise like a motorbike, and Rademann also has the right app ready to play the song to those who don’t know. Then you hear a long rattle. When the sun has gone down, the nightjar goes hunting for moths, flying through the air “like a jester,” as Rademann puts it. He makes a wild hand movement that looks like a crash pilot’s kamikaze flight: “You really rarely see him.” But recently it worked again, and that can even inspire fourth graders who otherwise have little to do with the subject of forests.

What Rademann does in the forest at night has a lot to do with the reason why there is a building of a rare appearance in Hamburg: The Bäumehaus in the Wilhelmsburg district is clad entirely in larch wood and is intended to arouse interest in nature, especially the forest. It houses a hotel, a restaurant, seminar rooms and a forest experience exhibition. And Rademann also has his office there. Because the building, which opened in 2012, was built by the Hamburg state association of the German Forest Protection Association (SDW), for which Rademann works. The association with its 25,000 members wanted to focus more on the topic of sustainability and the importance of forests. The idea behind it: “You protect what you love.”

When you enter the Bäumehaus, you immediately see a composite tree that extends from the lobby to the second floor. It’s on permanent loan from artist Ai Weiwei, so it fits in here as if he made it for it. “The individual parts arrived here in many large boxes, without instructions,” says Jan Muntendorf, the project manager at the Bäumer house. For three days they stacked the uprooted and sawn into pieces tree, for five years it has been an attraction amidst many peculiarities.

The term sustainability, which is on everyone’s lips today, was coined more than 300 years ago by a forester, says Muntendorf. Its credo: “Don’t harvest more than can grow back.” The large building that was realized as part of the International Building Exhibition (IBA) should also be as sustainable as possible. It stands on the huge area that was prepared for the international garden show held at the same time: the island park covers 100 hectares of nature, surrounded by canals, flower meadows, but also an indoor basketball and swimming pool, with a high ropes course next door.

The hotel’s top three floors are made entirely of wood. “The only concrete components are the elevator shaft and the stairwell,” says Muntendorf. You can stay overnight in 82 rooms, they all bear the names of trees and bushes and are furnished accordingly: In the juniper room, a branch of the small tree is attached to the wall, it winds towards the ceiling. “The climate balance of wood is much better than that of concrete,” says Muntendorf. Concrete is very energy-intensive to produce, and the necessary sand extraction causes environmental damage. This is completely different with the wood that is used here and ensures a special room climate: Anyone who sleeps between the spruce walls in the interior feels more like they are in a lonely log cabin than in the big city.

However, the guest should not only feel like they are in a tree house when it comes to the building materials; environmentally friendly solutions are also used when it comes to the furnishings. “It was important to us that everyone involved here also spread the idea of ​​sustainability,” says Muntendorf, not only in ecological but also in social terms. For this reason, people with disabilities and the long-term unemployed are also specifically employed. The hotel has organic bed linen and towels, and it was deliberately decided not to equip the rooms with energy-intensive minibars. A large fridge is available in the lobby for spontaneous cravings.

Down there, however, one also encounters concrete walls and pipes that meander along the ceiling: according to the building regulations, it was not yet possible to manufacture the entire building in wood, fire protection reasons spoke against it. However, the heating of the large building is very sustainable: A combined heat and power plant in the neighborhood, built as part of the IBA, generates bio-methane from green waste from the city, among other things, and the woods house is also supplied with the heat generated. In addition, geothermal energy is used through 128 piles in the ground under the building. There are no radiators in the hotel rooms, instead there is a ventilation system, as is usual in passive houses, through the exchange of air. And apart from being climate-friendly, this also has a practical side effect: since the air in the bathroom is discharged, the mirrors do not fog up after the shower.

Sustainably managed companies like to meet in the Bäumer house

During the peak phase of the corona pandemic, the Bäumehaus suffered like all catering establishments, but bookings have increased sharply again in recent months. “Many companies that operate and work sustainably themselves meet here,” says Muntendorf, and the restaurant on the ground floor is also popular again. “Enjoyment from the region” is the motto, “everything that can be grown in Germany is sourced from a radius of 100 kilometers”. Dumplings filled with cheese and spinach are on the menu or steak from “Wümme-Rind”, which comes from Fischerhude. The jams are homemade, the ice cream comes from a dealer in Wilhelmsburg. In any case, the protection community is specifically committed to the district. With her projects, she wants to address schools in the area where educational opportunities are unequally distributed.

Environmental educator Michael Rademann often experiences this in his work with primary school children. “You know exactly which students know the forest,” he says. There are the wealthy, whose parents took them into the forest of their own accord, and the financially disadvantaged, “they have absolutely no experience of the forest”. 77 percent of the under 18-year-olds in Wilhelmsburg have a migration background, which often means that the topic of the forest does not play a role in everyday life.

In order to change that, there is an interactive exhibition with dozens of discovery stations in the forest house. Behind the door, a couple of huge tree trunks await you, in the background a wild boar grunts, you can make exhibits wriggle at the push of a button in the Wunderkammer. Rademann gives tours here, he has also come up with a rally that takes the children through the Inselpark. One or the other animal can of course also be discovered or heard here: “Green woodpecker, song thrush, black redstart.” But they are not as special as the nightjar.

Rademann does around 25 bird tours every year, and he usually takes the students on projects in neighboring forest protection areas. “You should experience the forest with all your senses,” he says. Above all, you want to get away from classic tree determinations. This is popular with teachers, but not with children. “Forest coaching” is also about encouraging teachers to explore the forests independently with their classes. “Lately we’ve been howling like wolves,” says Rademann and laughs. In a catch game, the students learn how fawns protect themselves from wolves by remaining very calm. And then Rademann sometimes hears a question that touches and frightens him in equal measure: “Does the forest normally cost admission?”