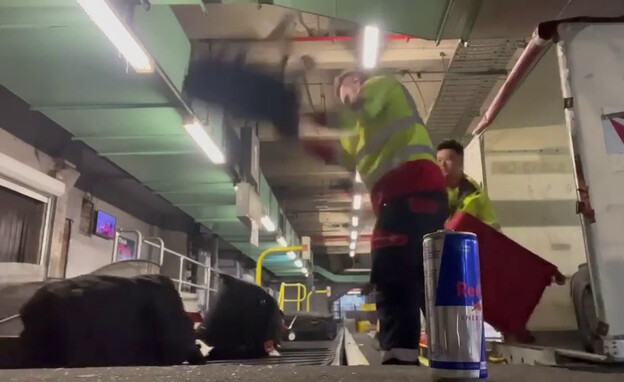 In a minute-long video published on Tiktok and which has already reached hundreds of thousands of views, the ground services workers at Melbourne Airport in Australia are seen carelessly throwing passengers’ suitcases onto the conveyor belt – and they don’t seem to care if the suitcase or its contents are damaged.

The three employees of the “Swiss-Port” company seem amused by their behavior during the video. One of the workers slammed one of the suitcases onto the conveyor belt, although there didn’t seem to be a valid reason for it. Another worker lifted a bag over his head and swung it in the air towards the conveyor belt – just like in a basketball game. In addition, two suitcases can be seen falling from the conveyor belt as a result of the workers’ careless behavior, but no one bothers to pick them up.

The video, which was quickly distributed all over the web, drew angry reactions from the surfers: “It takes more effort to forcefully throw the suitcases than to put them on the conveyor belt, if they don’t like the job – let them find another job,” one surfer wrote, and another surfer recommended: “You need to install Cameras that will monitor the actions of the sufferers.”

The “Swiss-Port” company employs more than 68,000 people in 315 airports, and it operates in 50 countries around the world. In a statement published by the company after the incident, it condemned the actions of the employees and promised to handle the customers’ belongings with care and rigor. “It seems that the actions of the staff in the video are contrary to our level of service. The staff in question has been fired and an urgent investigation has been opened,” the company wrote.