24 hours of Christmas celebrations in Nazareth 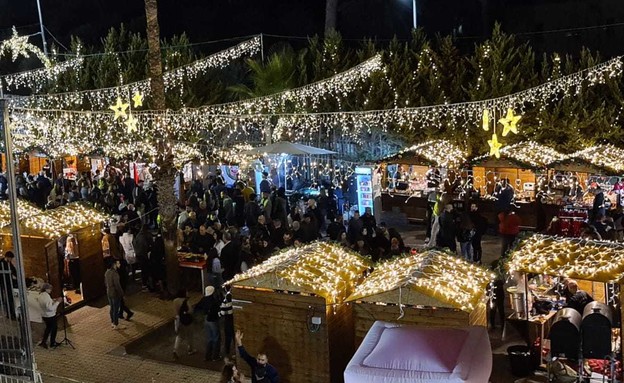 It is no longer possible to celebrate Christmas abroad. I mean it is possible, but not in Britain which has turned red, nor in Germany which has been abolished and in other places it becomes too complicated. Where is it possible? Right here with us: from Jerusalem through Jaffa, Haifa to the Galilee. “The most beautiful holiday there is but it is not ours”, we chose to do in Nazareth.We started our day with a check-in at the Ramada Olivier Hotel in the city, which also, of course, decorated itself and prepared itself for a month (and a bit) of celebrations. It starts with the bright entrance that welcomes you, continues in the ornate lobby and ends with a variety of festive options that include free city tours for hotel guests, knafa workshops (the most delicious you have eaten), haflaot in the hotel bar, Santa Claus on every corner and no less important – indoor pool you can also enter December, which on the surface is supposed to be cold.

A double package during the middle of the week in December, which includes accommodation, cooking workshops, holiday activities and a tour of Old Nazareth, will cost from NIS 899 for a double room.

Beyond the holiday atmosphere, one of the things that stands out in the hotel, and for which we also came to the city, is the food there. A winning combination of rich variety (as Israelis love), with the uniqueness of Arabian food (and non-kosher!), Which makes breakfast and dinner at the Saffron Hotel restaurant one of the best we have eaten at any hotel in the country. What can be put here on a plate? Grilled meats, rice, friki, pastries, salads, fish and no less important – baklava and more sweets.

The person in charge of the food is chef Rami Abu Lil, who also runs the Locanda restaurant, where you can eat breakfast / lunch / dinner as needed and for an additional fee. The restaurant serves Galilean Arabian food in dishes that include pastas, meats and meticulous salads. The prices of the dishes range from NIS 35 for a large dipped salad to NIS 135 for the Galilee Mountains fillet in Piper Steak sauce. We ate a large Lebanese salad (54 shekels) and a dairy kebab in a tahini sauce served in a pan wrapped in baked dough (pita) and it tastes as good as it sounds (84 shekels).

New Year’s Eve will be celebrated at the hotel with a meal with 7 dishes, workshops and of course an event for the New Year that will include a dance party, holiday decorations that will give a festive and sparkling overseas atmosphere at midnight. A double weekend package, which includes two nights, will cost NIS 3,600.

Olivier Ramada Hotel Nazareth. Phone for reservations: 9410 * or on the website.

Nazareth of the night

Starting at five in the evening, when the sun goes down, Nazareth is adorned with gypsy lights and there are quite a few impressive and bright places to walk around and feel like in Europe (sorry for the cliché, but it’s real). We went out to visit the Christmas market of the “Almaukhav” association where there were stalls, lights, performances and food, which for two hours gave us a feeling that we were in a completely different place.

Although this market has already closed its doors for the upcoming season, the association, which aims to strengthen the city’s status in Israel and around the world around Christmas and New Year celebrations, continues with a variety of events until the new year: a musical performance of “The Nutcracker” at St. Joseph School Theater December 20, Christmas procession – Peace and fraternity procession on December 24 along Paul VI Street and a light show at Don Bosco Church on New Year’s Eve.

According to Nabil Tutari, chairman of the association, she receives modest support from the Ministry of Culture and Sports for the part of the stage events only. Realize its goals.

Beyond that, in the city as mentioned, quite a few more colorful Christmas events take place. A total of 4 were invested in it NIS 1 million in illuminating the main streets on the Gospel Road, the area of ​​the Greek Orthodox Church, the market area, the Church of the Annunciation, the City Square, the White Mosque and other sites funded by the Ministry of Tourism and the Government Tourism Company. In addition, there are many private events that are worth checking out.

For all the activities in the city, visit the website

The day is worth taking advantage of for a tour of various points in the city: the spring square, where the main tree of the city is located and next to it is also the Church of the Annunciation; The market, where you can find unnecessary but happy gifts in the holiday atmosphere and good food; The impressive Gospel Basilica and more.

It is estimated that about 10,000 Israelis are expected to visit the city during the holiday, and contrary to the lights and celebrations, Nazareth’s roads and infrastructure are still not reminiscent of Europe. As a result, traffic jams and congestion in the city during the day can be unbearable, and it is recommended that you tour the streets of Nazareth and its main points early, before checking out or returning for lunch.