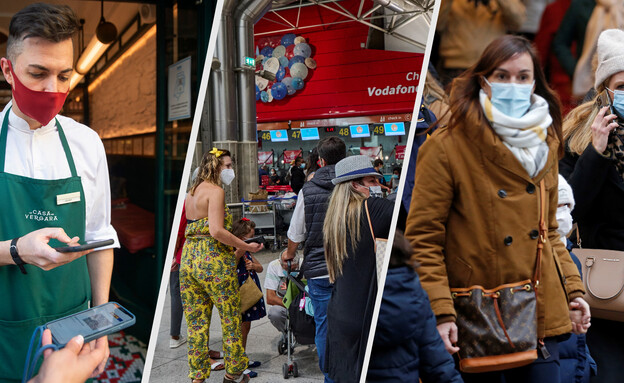 The decision of the Committee for the Classification of Countries in the Ministry of Health to update the list of countries that will turn red in the coming days, is causing a great stir among 3 main countries on the list – the United Arab Emirates, France and Spain. The new decision is expected to take effect next week at midnight between Sunday and Monday, December 19, 2021. This means that exit to these countries will be prohibited, except with the approval of the Exceptions Committee. Israelis with a green mark who wish to return to Israel will be required to enter home isolation until the results of a PCR test and another test after a week. Verified or unaccompanied passengers will be required to be briefly inspected at the motel until an answer is obtained from the PCR test they conducted at Ben Gurion Airport.France Is one of the countries that will turn red on the night between Sunday and Monday, when in recent days there have been sharp increases in the numbers of those infected with it. Many Israelis who planned to arrive in France soon now feel that the chaotic situation leaves them hanging in the air: “We canceled a ticket from the country and there is no consideration on the part of the airlines,” says an Israeli who was due to arrive in France soon. Also, many Israelis have canceled or postponed their flights, with some claiming that the airlines are actually the ones canceling the flights proactively.

Sharon Heinrich, a culinary tour guide in Paris, tells Mako that “we are full two months ahead and of course we are starting cancellations. Israelis who of course decided not to come in light of the new situation. We returned after a year and a half without tourism, started working in October, November and December “Everything is overthrown and of course there is currently no help from the state here (France) because it is actually a decision of Israel, so it leaves us hanging in the air. People are starting to digest and understand what to do. There is a bit of chaos,” she said.

Heinrich adds that following the decision in Israel, she will hold virtual tours among the Christmas trees and the colorful lights of Christmas live on Facebook that will be open to everyone. “It both helps us and also allows people to be in Paris from a distance,” she concludes.

The situation is similar in Spain, Which has now joined the list of red states, even though more than 80 percent of the population is vaccinated. “All the guys who work here in tourism are in shock because it was unexpected. Spain is one of the most vaccinated countries in Europe and there are long queues for the third vaccine,” says Liana, a tour guide at Barcelona. “We have already started receiving emails about cancellations or those who do not know what to do and are afraid of getting stuck in Spain because the airlines will cancel their flights. It has fallen on us in the market, we are without work for a year and a half. “Especially at Christmas. Everything is under control and this is a hallucination. We will continue to go on virtual tours through Facebook.” Said Liana.

About 10,000 Israelis were scheduled to fly to Dubai next week on an air train of about 85 flights, despite the fact that the country’s morbidity figures are among the lowest in the world and the percentage of those vaccinated is over 90 percent. “Decisions are made without checking data,” says Avigdor Harel, an Israeli tourism guide who lives in Dubai and claims that “there is no outbreak of the omicron virus here. It is a stupid and hysterical decision that hurts thousands of Israelis who bought plane tickets and vacation packages to celebrate Christmas here.”

Dubai and Abu Dhabi are considered the hottest destinations for Israelis in recent weeks, especially in light of the dramatic increase in the number of patients in Europe from the Omicron virus. According to Dubai authorities, 2,860 people are infected with the corona virus, with 2,151 people dying from the disease. Less than a hundred people are verified per day from the virus.

Odelia, who bought airline tickets for her and her husband to Dubai is furious and so are many Israelis who fear that they will not receive a refund for the flight and the vacation packages they purchased: “It does not make sense at the last minute to decide that Dubai is red. “More than Israel is safe. People there are very civilized, not like in Israel,” Odelia is furious. “There is no logic in this decision at all. There are less than a hundred new patients a day. ? “.

“What do we do now? Will we chase again the travel agents and airlines that will return the money to us? Not sure we will get a refund. It is a pity that the government makes decisions without checking the data in Dubai,” an angry son who was scheduled to fly to Dubai on Sunday with his girlfriend. “Fulfilled if the data there was difficult I can understand but that is not the case at all.”

In addition to the new countries that have entered the list, there are other countries that are currently being examined and targeted, with the chances that they will also be classified as red rising. Among the countries can be found the U.S, Where the level of morbidity is very high, so too Germany, Portugal, Turkey, Hungary And more.

According to Nir Mazor, VP of Aviation Relations: “The repeated announcements about the inclusion of more and more countries on the red list have led to cancellations, postponements and especially the desire of Israelis staying abroad to return before the decision takes effect. However, there are countries that can still be flown to relatively safely, such as Greece, Bahrain and Cyprus, which are within a relatively short flight distance and can be flown to within a quick decision range. “