The Israeli who violated isolation in Thailand will be prosecuted 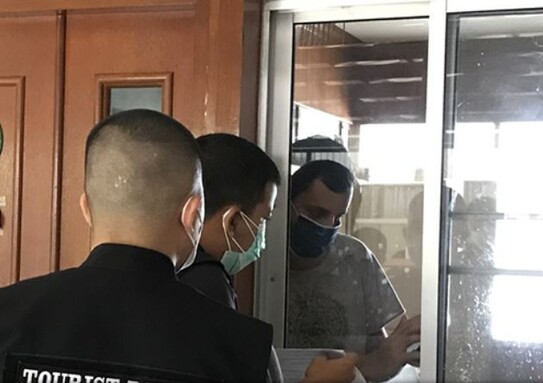 Second RT-PCR test on #Israeli tourist #Ohad Baruch at #KohSamui Hospital was negative but he is quarantined at the hospital for 10 days before another test. pic.twitter.com/GihmhBi7hi

A few days ago, Ohad Baruch, a 29-year-old Israeli tourist, was arrested in Thailand on suspicion of violating isolation after there was a suspicion that despite a positive outburst and it was suspected that he was carrying the omicron virus, he was violating isolation. While Baruch himself claims that this is a misunderstanding, he may want a sentence of up to two years in prison.

Baruch landed last Friday in Bangkok. He underwent a corona examination at the airport after which he was supposed to stay at the hotel until the final result was obtained. But Baruch, according to the suspicion, did not wait for the result and went to Pattaya. Baruch tried to enter a hotel in Pattaya but was refused by the owner as it realized he was violating insulation. From there Baruch continued to Cosmoi.

“He thought that in Kosmoy he would be able to escape from the authorities, but he was wrong,” says an Israeli who knows the details of the affair closely. “He tried to be too clever and did not take into account that in corona matters they are very strict.” It seems that at some point Baruch realized that he had gotten into trouble and called the Israeli embassy in Thailand and asked to turn himself in to the local police.

Baruch was arrested by local police and has so far undergone three corona tests in which he was found negative, but he was not released as he violated isolation. While Baruch continues to make the mistake of speaking in misunderstandings, the Thai police insist on prosecuting him for breach of solitary confinement and if convicted he could receive a sentence of up to two years in prison. He will be charged with breach of solitary confinement, escape from custody. The fear he could have infected people in Corona, a violation of an emergency-Corona order.

On the one hand, Baruch’s case comes at a time when the number of patients in Thailand is declining and stands at about 2,300 new patients a day. On the other hand, the spread of the omicron strain in the world has caused the authorities to take a step back in the tourism program and not allow more free entry to all areas of the country, as has been the case recently, and now anyone wishing to travel in Thailand must land in Phuket first and stay at least five days.

Baruch’s arrest made all the headlines on television in order to deter people, including tourists, from seeing and being seen and not breaking isolation. Baruch is required to pay about 45,000 baht, which is about NIS 4,300. Baruch is currently being held at Tong Lor Police Station in Bangkok.

Baruch claimed to his associates that his arrest was merely intended to make headlines at his expense. The Israeli embassy in Thailand is trying to assist in Baruch’s release from detention and is in contact with law enforcement so that he will not be tried. “He should pray that he will pay only a fine and not be prosecuted,” explained Israeli lawyer Yossi Merling, who lives in Thailand and is well acquainted with the Thai legal system. .

Advocate Merling adds: “Cases like his make us a bad name in Thailand. All the television advertising of his arrest hurts us those who keep the law. They did not just publish the affair and his photos because the police wanted to send a message to citizens and tourists not to break isolation because there is a fear of an increase in the omicron virus in the country. It was a very unusual event, so he was arrested. ”