Recommendations for a nature trip around Eilat 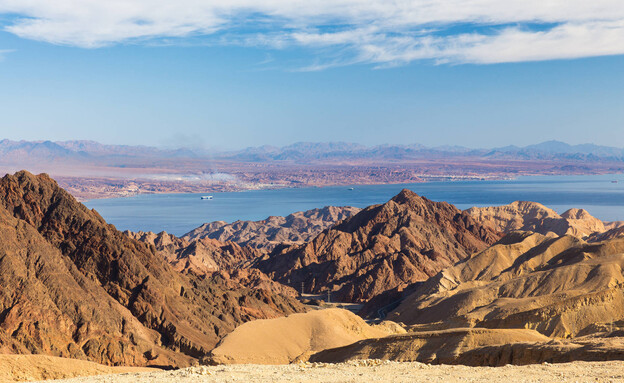 Winter has already reached most parts of the country and brought with it a storm, rains and low temperatures. But as always, the weather in Eilat remains comfortable and pleasant for anyone who wants to get out of the cold and enjoy a southern vacation. So although the city itself can be a great destination for an escape from winter, it is precisely the dramatic nature around it that will surprise you with its beauty.Here are some worthwhile recommendations for warm, southern nature walks that are worth taking in the coming winter

Viewers to the south of the Arava coming from the Red Sea, will have a hard time noticing the southernmost nature reserve in Israel – a nature reserve from the Eilat Mountains. In this spectacular area, the oldest bedrock is exposed in the Land of Israel, which is sloping with a variety of rocks such as sandstone-Nubian granite, cardboard limestone and dolomite. The topography of the Eilat mountains is very steep as a result of long-term weathering, which created geological fractures that caused a huge subsidence to the plains of the Arava.

The Eilat Mountains represent an extreme desert characterized by low rainfall and extremely high temperatures. As a result of these conditions, plants and animals underwent a process of adaptation and resistance to high radiation, low water consumption and a change in operating hours. The local vegetation has been adapted to a small amount of precipitation similar to the acacia tree and the Rotem Desert, and most of them grow in the flow channels and utilize the groundwater from the occasional flood events and are available food for chamois, deer and rock rabbits.

North of the block of granite rocks near the city of Eilat, it proudly houses an ancient ancient temple called Mount Amir. In a variety of colors and layers of Nubian sandstone, and spectacular outcrops of marl clay and chalk, Mount Amir is one of the most beautiful in the Eilat Mountains, and in its northern part, ancient copper mines from the Nabataean period were exposed. In the center of the mountain, an impressive stream – Nahal Amir – competes with the Nubian sandstones. Recommended as a family trip from Givat Yocheved or from Amram Pillars to Black Mall.

To the south of the rock block in the Massiv Eilat Reserve, rises an ancient mountain that has undergone a process of melting with great heat and enormous pressure called transformation. In the language of geologists the smallest crystal on a mountain is called slate and in many cases slate. The ascent to Mount Slate begins in Nahal Shlomo near the camel farm and after a short walk the view from its summit is spectacular and breathtaking, which includes Aqaba, the Red Mountains, the city of Eilat, the coral reefs and the Gulf of Eilat coming from the Sinai mountain range. It is recommended to end the hike at the entrance to the coral coast reserve for a cool snorkel.

In the center of the southern prairie in the Yotvata salt marsh, located south of the kibbutz, is the Yotvata wildlife bar, which was established in the 1960s to restore desert wildlife to nature, such as the ostrich, the ram, the arud and the wild. In the areas of the reserve, acclimatization areas for animals were established, from which many dozens of savages were returned to the Negev Mountains, and to the Arava areas, dozens of white rams. An overnight parking lot has been built in the reserve, which allows travelers to enjoy a pleasant area for families.

In the southern coastal strip of Eilat, the northernmost coral reserve in the world was declared in the 1970s. A beautiful and spectacular habitat for hundreds of species of corals, fish and a variety of invertebrates that live in a unique harmony. Basic snorkeling equipment can be rented – mask, snorkel and buoyancy vest. The reserve is a diving, snorkeling and freedom training center for the thousands of visitors who visit the coastal strip all year round and enjoy tropical views of the sea.

The Nature and Parks Authority, in collaboration with the Ministry of Tourism, built a series of overnight parking lots in the southern Arava and in the central Negev several years ago. These allow travelers to stay safely and comfortably and enjoy drinking water, ecological services and comfortable lodgings for camping, with the night sky adorned with thousands of stars alongside desert stories or an impressive astronomical observation. From the night camp you can go on day trips to Ein Netafim, Mount Shlomo and Nahal Gesheron.

For those who walk on the Israel Trail, upgraded overnight parking lots are available for travelers, including overnight sleepers, drinking water and ecological services in Nahal Tzichur, Beer Melhan, Atak-Raham, Black Canyon, Mount Yehoram, and from there a descent in Nahal Gesheron, Ker Rehavam, Rosh Ma’ale Bulbusim, and Mount Slate. For a vacation or a hiker, the object is to enhance the experience of visiting the desert or the Red Sea, which combines both hiking and snorkeling with diving or swimming on the beach. Take a day break for a wheelbarrow, take a stick and also a backpack, or rather, just get in the car and drive south.